Roman Opalka. Wake Up World. Belief Systems. By Kanta Jacob Katz Ph.D Guest Writer for Wake Up World Our belief systems are thoughts that have become our habits that determine what we think, what we feel and how we react to life. 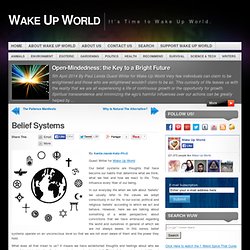 They influence every fiber of our being. In our everyday life when we talk about “beliefs” we usually refer to the values we adopt consciously in our life, to our social, political and religious ‘beliefs’ according to which we act and behave. However, here we are talking about something of a wider perspective: about convictions that we have embraced regarding the world and ourselves in general of which we are not always aware. What does all that mean to us? Where does it all come from? Let’s look at these two words together and their meaning, to get a picture of how they interact in our life. The definition of ‘belief’ is: (1) A thought or feeling that something exists or is true, without proof. (2) A vague or specific idea on which some confidence is placed. (3) A religious doctrine that is proclaimed as true. The Ethicist Contest Winner - Give Thanks for Meat.

17 Things Worth Knowing About Your Cat. North Brother Island: Abandoned New York leper colony. Snowbound: The window has fallen out of the wall in this science classroom in the school (left) while tiles cling to a long-abandoned bathtub (right), one of two in the western wing of the tuberculosis pavilion Misplaced: The altarpiece from the chapel was moved to a maintenance building before the island was abandoned where it still sits on a table Mary Mallon (above, right) was the most infamous patient at North Brother Island where she spent nearly three decades of her life. 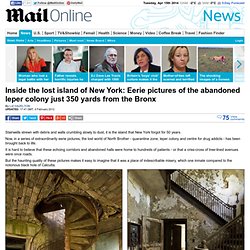 Despite being healthy, she was a carrier of the typhoid virus – and is believed to have been responsible for 43 infections and three deaths. ‘Typhoid’ Mary, an Irish immigrant who emigrated to the U.S. in 1884, worked as a cook from 1900 to 1907. She was first identified as a carrier by medical researcher George Soper, who concluded she was responsible for a spate of infections linked to where she lived and worked. You Need To Get Off Facebook. Jake Reilly's 'Amish Project:' 90 Days Without a Cell Phone, Email and Social Media. Could you live without daily electronic conveniences—Twitter, Facebook, email, texting and more—for 90 days? 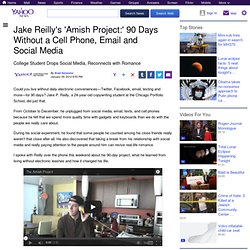 Jake P. Reilly, a 24-year-old copywriting student at the Chicago Portfolio School, did just that. From October to December, he unplugged from social media, email, texts, and cell phones because he felt that we spend more quality time with gadgets and keyboards than we do with the people we really care about. During his social experiment, he found that some people he counted among his close friends really weren't that close after all. He also discovered that taking a break from his relationship with social media and really paying attention to the people around him can revive real-life romance. I spoke with Reilly over the phone this weekend about his 90-day project, what he learned from living without electronic leashes and how it changed his life.

You say you spent three months completely cut-off from the virtual world. Did you ever cheat and check to see what messages came in? Waldosia. The Dictionary of Obscure Sorrows is a compendium of invented words written by John Koenig. 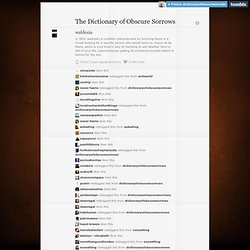 Each original definition aims to fill a hole in the language—to give a name to emotions we all might experience but don’t yet have a word for. The author's mission is to capture the aches, demons, vibes, joys and urges that roam the wilderness of the psychological interior. Each sorrow is bagged, tagged and tranquilized, then released gently back into the subconscious. ▸ visit the facebook page to hear the backstory behind each word ▸ follow on twitter (@obscuresorrows) for whatever reason ▸ send me a tumblr message describing emotions you need words for ▸ send me an email via obscuresorrows@gmail.com JOHN KOENIG is a designer and commercial director who lives in St. He is currently writing a book version of The Dictionary of Obscure Sorrows.

Copyright © 2013 John Koenig. Insignificant. The Scale of the Universe 2. Icy Finger of Death Filmed for the First Time. Like a lightning bolt hurled down from Mount Olympus, an icy “finger of death” strikes at sea life beneath the Antarctic ice shelf in what is surely one of the most jaw-dropping natural history sequences ever filmed. 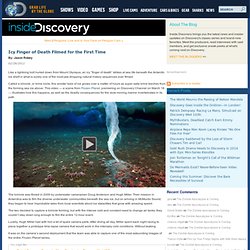 Called a brinicle, or brine icicle, this sinister tube of ice grows over a matter of hours as super-salty brine leeches from the forming sea ice above. This video — a scene from Frozen Planet, premiering on Discovery Channel on March 18 — illustrates how this happens, as well as the deadly consequences for the slow-moving marine invertebrates in its path. The brinicle was filmed in 2009 by underwater cameramen Doug Anderson and Hugh Miller. Their mission in Antarctica was to film the diverse underwater communities beneath the sea ice, but on arriving in McMurdo Sound, they began to hear improbable tales from local scientists about ice stalactites that grow with amazing speed.