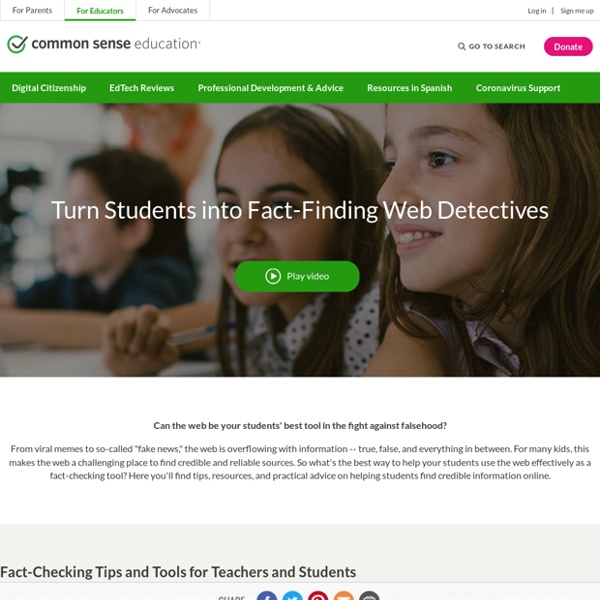 Fact-Checking Tips and Tools for Teachers and Students Show students where to look for credible information on the web. Explain that professional fact-checkers may already have done this important work for us. Use the resources below as references for finding vetted and fact-checked information. Google Search Skills Every Student Should Know Upgrade your students' Google game! Using Reverse Image Search as a Fact-Checking Tool Google is great for fact-checking -- but only if you know how to use it! Resources to Address the So-Called "Fake News" Phenomenon Make news literacy part of your web-literacy lessons. Further Reading and Research on Web and Media Literacy Looking for a deeper dive into web literacy for students? Share These Ideas With Everyone in Your Network! Concerned about what kids see as fact or fake when they're online? More News- and Media-Literacy Resources from Common Sense

Did Media Literacy Backfire? – Data & Society: Points Update: On March 9, 2018, I gave a talk expanding on my ideas in this post after a year of reflection/research. You can read the talk crib and watch the video at here: “You Think You Want Media Literacy…. Do you?” Anxious about the widespread consumption and spread of propaganda and fake news during this year’s election cycle, many progressives are calling for an increased commitment to media literacy programs.

Swiss university launches country's first ever degree in yodelling Swiss yodeller Nadja Räss will teach the course. Photo: andibrunner.com From the 2018/19 academic year it will be possible to study yodelling to degree level in Switzerland for the first time. The Lucerne University of Applied Sciences and Arts is adding yodelling to its Folk Music programme from the autumn, offering both a three-year bachelor’s and a two-year master’s degree in the alpine vocal technique, it said on its website. Who Stands Between Fake News and Students? Educators Every week, Dave Stuart hands out a current news article to his world history students so they can digest and evaluate the credibility of the information and its sources. One day this fall, Stuart, now in his tenth year at Cedar Springs High School in Michigan, distributed a couple of stories about the 2016 presidential candidates. In the middle of a uniquely controversial and divisive campaign, it was perhaps inevitable that during the discussion some students would dredge up information that didn’t appear in the articles their teacher had provided. It was quickly apparent, says Stuart, that much of it was untrue and probably gleaned from dubious sources – or peddlers of what has now been famously dubbed “fake news.”

sans titre Our students use the web every day -- shouldn't we expect them to do better at interpreting what they read there? Perhaps … but not necessarily. Often, stereotypes about kids and technology can get in the way of what's at stake in today's complex media landscape. Sure, our students probably joined Snapchat faster than we could say "Face Swap," but that doesn't mean they're any better off at interpreting what they see in the news and on the web. As teachers, we've probably seen students use questionable sources in our own classrooms, and a recent study from the Stanford History Education Group confirms it: Students today are generally pretty bad at evaluating the news and other information they see online.

MediaBreaker Critical Remix Tools - The LAMP Break-a-thons are short-term programs with The LAMP, and a perfect introduction for youth about how, why and for whom media are made. Each Break-a-thon focuses on a theme, like the Super Bowl, the MTV Video Music Awards, movie trailers or political advertising; youth then come together for one or two days to break media related to the theme. Participants compete in challenges throughout the event, win prizes and create their very own broken videos talking back to mass media.

Protect Yourself from Fake News - Fact v. Fiction - Fake News - Academic Guid... Here are some steps you can take to become a critical news consumer: Determine what type of article you are reading Is it an editorial or opinion piece? These articles reflect the author's personal beliefs and point of view. Untrustworthy sources can blur the line between reporting the facts and expressing opinions. Truth and the Modern Classroom December 19, 2016 Findings from a recent Stanford study show that middle and high school students have great difficulty in effectively evaluating the reliability of online sources. The study revealed that most middle and high school students accept information online as presented without questioning or verifying it.

How Teachers Can Navigate School Closures Due to the Coronavirus Updated with new resources on 4/29/20. Online Learning Resources Use these trusted resources to continue to provide meaningful learning experiences for students during school closures. This post will be regularly updated as new resources become available. PBS LearningMedia MediaLit Moments Friday, 19 May 2017 11:06 Beth Thornton In the “olden days,” people primarily relied upon newspapers for their news, and the papers were clearly labeled by section -- “News” “Features” “Opinion.” Through everyday use, newspapers trained their readers to expect the international and national news on the front page, and state and local news in following pages, and to flip through the pages for articles about local heroes or topics of interest like Home and Garden, Sports, or their favorite columnists and Editorials. Today, such labels are abandoned when articles are lifted as links and shared via social media, or when people check YouTube for the latest news, or when people accept their friends’ postings as “news.” When you read your news on Facebook (and many people do!) you are not alerted to the genre of the story, and it’s often hard to tell which category the story may fit.

How to identify fake news The illustration above, which shows reporters carrying various forms of fake news, was published way back in 1894 by pioneering cartoonist Frederick Burr Opper. He would have been blissfully unaware at the time of its creation, but he had just uncovered a powerful phrase that, 123 years later, would become word of the year for 2017 and which would define the credibility and legitimacy of the news, mass media and journalism throughout the 21st century. Rubber Duck Media explains below how to identify fake news and what can be done to prevent it spreading further and doing more damage. The dissemination of fabricated information designed to mislead, push a narrative or agenda, or to simply attract attention for its own sake, is not a new concept by any means. In the form of propaganda, it has been the weapon of choice for a succession of governments and powerful demagogues throughout history to obtain and hold onto power, whilst simultaneously suppressing any dissent.

What these teens learned about the Internet may shock you! When the AP United States history students at Aragon High School in San Mateo California, scanned the professionally designed pages of www.minimumwage.com, most concluded that it was a solid, unbiased source of facts and analysis. They noted the menu of research reports, graphics and videos, and the “About” page describing the site as a project of a “nonprofit research organization” called the Employment Policies Institute. But then their teacher, Will Colglazier, demonstrated how a couple more exploratory clicks—critically, beyond the site itself—revealed that the Employment Policies Institute is considered by the Center for Media and Democracy to be a front group created by lobbyists for the restaurant and hotel industries. “I have some bright students, and a lot of them felt chagrined that they weren’t able to deduce this,” said Colglazier, who videotaped the episode last January. “They got duped.”

Three Tools for Teaching Critical Thinking and Problem Solving Skills One of the tools Jason Watt learned about in his training is called the ladder of inference. It’s a model for decision making behavior developed by Harvard professors Chris Argyris and Donald Schön. Essentially, it helps students slow down and realize which data they are taking into account when they make a decision and how the data they choose is informed by their past experiences. Assumptions are often made in a split second decision because the brain is wired to prioritize data that confirms the model a person already holds. The ladder of inference is a way to check those assumptions. Watt first used the ladder in a very basic way; he showed his grade two students an image of a soccer player lying on the ground, one leg up, holding his head.