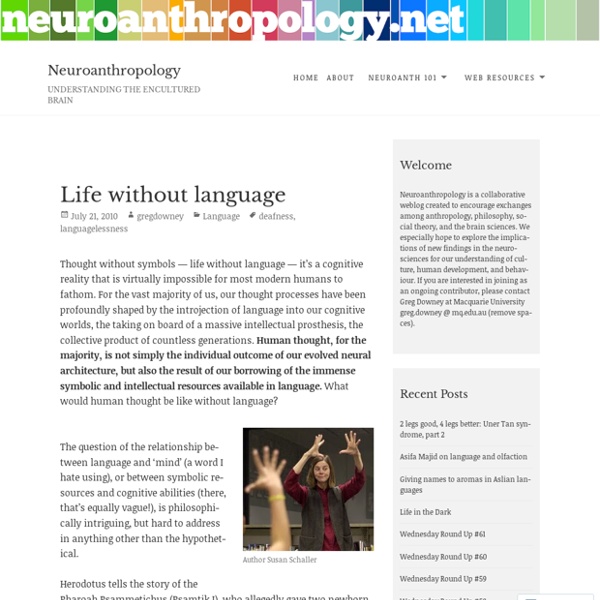 Thought without symbols — life without language — it’s a cognitive reality that is virtually impossible for most modern humans to fathom. For the vast majority of us, our thought processes have been profoundly shaped by the introjection of language into our cognitive worlds, the taking on board of a massive intellectual prosthesis, the collective product of countless generations. Human thought, for the majority, is not simply the individual outcome of our evolved neural architecture, but also the result of our borrowing of the immense symbolic and intellectual resources available in language. What would human thought be like without language? Author Susan Schaller The question of the relationship between language and ‘mind’ (a word I hate using), or between symbolic resources and cognitive abilities (there, that’s equally vague!) We might try to imagine thinking without language, but, of course, we’d be doing that with language itself. Schaller meets Ildefonso Language-less thought

The Confederate Cause in the Words of Its Leaders - The Atlantic This afternoon, in announcing her support for removing the Confederate flag from the capitol grounds, South Carolina Governor Nikki Haley asserted that killer Dylann Roof had “a sick and twisted view of the flag” which did not reflect “the people in our state who respect and in many ways revere it.” If the governor meant that very few of the flag’s supporters believe in mass murder, she is surely right. But on the question of whose view of the Confederate flag is more twisted, she is almost certainly wrong. Why Facts Don’t Change Our Minds In 1975, researchers at Stanford invited a group of undergraduates to take part in a study about suicide. They were presented with pairs of suicide notes. In each pair, one note had been composed by a random individual, the other by a person who had subsequently taken his own life. The students were then asked to distinguish between the genuine notes and the fake ones. Some students discovered that they had a genius for the task. Out of twenty-five pairs of notes, they correctly identified the real one twenty-four times.

A quantum experiment suggests there’s no such thing as objective reality Back in 1961, the Nobel Prize–winning physicist Eugene Wigner outlined a thought experiment that demonstrated one of the lesser-known paradoxes of quantum mechanics. The experiment shows how the strange nature of the universe allows two observers—say, Wigner and Wigner’s friend—to experience different realities. Since then, physicists have used the “Wigner’s Friend” thought experiment to explore the nature of measurement and to argue over whether objective facts can exist. That’s important because scientists carry out experiments to establish objective facts. But if they experience different realities, the argument goes, how can they agree on what these facts might be?

Language Is the Scaffold of the Mind - Issue 76: Language Can you imagine a mind without language? More specifically, can you imagine your mind without language? Can you think, plan, or relate to other people if you lack words to help structure your experiences? Many great thinkers have drawn a strong connection between language and the mind. Oscar Wilde called language “the parent, and not the child, of thought”; Ludwig Wittgenstein claimed that “the limits of my language mean the limits of my world”; and Bertrand Russell stated that the role of language is “to make possible thoughts which could not exist without it.” After all, language is what makes us human, what lies at the root of our awareness, our intellect, our sense of self.

Why Intelligent People Can't find Happiness - The Minds Journal “Happiness in intelligent people is the rarest thing I know.”-Ernest Hemingway The presence of a faithful and loving partner, a great family life and a successful career may not be enough to prevent an intelligent soul to feel grief and melancholy. Here are six most likely reasons why happiness seems to elude highly intelligent people:

People who think their opinions are superior to others are most prone to overestimating their relevant knowledge and ignoring chances to learn more By guest blogger Tom Stafford We all know someone who is convinced their opinion is better than everyone else’s on a topic – perhaps, even, that it is the only correct opinion to have. Maybe, on some topics, you are that person. No psychologist would be surprised that people who are convinced their beliefs are superior think they are better informed than others, but this fact leads to a follow on question: are people actually better informed on the topics for which they are convinced their opinion is superior? This is what Michael Hall and Kaitlin Raimi set out to check in a series of experiments in the Journal of Experimental Social Psychology. The researchers distinguish “belief superiority” from “belief confidence” (thinking your opinion is correct).

What Makes You You? - Wait But Why Note: If you want to print this post or read it offline, the PDF is probably the way to go. You can buy it here. When you say the word “me,” you probably feel pretty clear about what that means. It’s one of the things you’re clearest on in the whole world—something you’ve understood since you were a year old. You might be working on the question, “Who am I?”

Think Confederate monuments are racist? Consider pioneer monuments In San Francisco, there is an an 800-ton monument that retells California history, from the Spanish missions to American settlement. Several bronze sculptures and relief plaques depict American Indians, white miners, missionaries and settlers. A female figure symbolizing white culture stands atop a massive stone pillar. The design of the “pioneer monument” was celebrated in newspapers across the country when it was erected in 1894.

Philosophy of Mind: all-female syllabus - Zoe Drayson Welcome to my all-female syllabus for teaching undergraduate philosophy of mind. I created this syllabus largely to show that it can be done, and to create a resource for other philosophers looking to add female authors to their syllabi. (I did not create this syllabus in an attempt to rid the philosophical world of men.) I was also inspired by finding this personal ad on Google. The Erasure of Islam from the Poetry of Rumi A couple of years ago, when Coldplay’s Chris Martin was going through a divorce from the actress Gwyneth Paltrow and feeling down, a friend gave him a book to lift his spirits. It was a collection of poetry by Jalaluddin Rumi, the thirteenth-century Persian poet, translated by Coleman Barks. “It kind of changed my life,” Martin said later, in an interview. A track from Coldplay’s most recent album features Barks reciting one of the poems: “This being human is a guest house / Every morning a new arrival / A joy, a depression, a meanness, / some momentary awareness comes / as an unexpected visitor.” Rumi has helped the spiritual journeys of other celebrities—Madonna, Tilda Swinton—some of whom similarly incorporated his work into theirs. Aphorisms attributed to Rumi circulate daily on social media, offering motivation.

Predictive Physiological Anticipation Preceding Seemingly Unpredictable Stimuli: A Meta-Analysis 1Department of Psychology, Northwestern University, Evanston, IL, USA 2Dipartimento di Psicologia Generale, Università di Padova, Padova, Italy 3Department of Statistics, University of California, Irvine, CA, USA This meta-analysis of 26 reports published between 1978 and 2010 tests an unusual hypothesis: for stimuli of two or more types that are presented in an order designed to be unpredictable and that produce different post-stimulus physiological activity, the direction of pre-stimulus physiological activity reflects the direction of post-stimulus physiological activity, resulting in an unexplained anticipatory effect. The reports we examined used one of two paradigms: (1) randomly ordered presentations of arousing vs. neutral stimuli, or (2) guessing tasks with feedback (correct vs. incorrect).

Has American Politics Hit Rock Bottom? Read Tom Nichols on why he’s leaving the Republican party But gender is indeed one of the “great disputes of national life.” The Kavanaugh fight pitted people who worry that #MeToo hasn’t changed America enough, that it’s still too easy for men to get away with sexual assault, against people who fear that #MeToo has changed America too much, that it’s become too easy for women to ruin men’s lives by charging them with sexual assault. That’s not a tribal struggle; it’s an ideological one. It involves competing visions of the relationship between women and men. How We Grieve: Meghan O’Rourke on the Messiness of Mourning and Learning to Live with Loss John Updike wrote in his memoir, “Each day, we wake slightly altered, and the person we were yesterday is dead. So why, one could say, be afraid of death, when death comes all the time?” And yet even if we were to somehow make peace with our own mortality, a primal and soul-shattering fear rips through whenever we think about losing those we love most dearly — a fear that metastasizes into all-consuming grief when loss does come. In The Long Goodbye (public library), her magnificent memoir of grieving her mother’s death, Meghan O’Rourke crafts a masterwork of remembrance and reflection woven of extraordinary emotional intelligence.