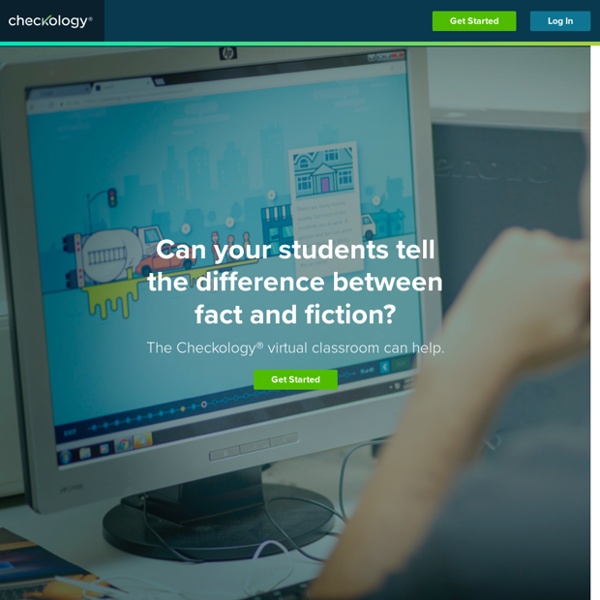 Teaching Students about Fake News in the Real World — Literacy Ideas Whatever Donald Trump’s legacy as president of the United States becomes he will forever be known as the protagonist for bringing two key terms to the modern vocabulary. “Fake News” and “Alternative Truths” Whilst Trump’s delivery and intent of these terms are contentious there is no debate he called out the elephant in the room when talking about news and journalism in the context of modern technology. Facebook, Twitter, blogging and an endless army of social media tools have provided a platform for anyone with a WiFi connection and a device the opportunity to voice their opinion and consider themselves a journalist, social crusader, paid opinion or blatant liar... The propagation of questionable “news” content has skyrocketed out of control at pace with the growth of the internet. Content creation today is virtually free without any need for fact-checking or validation.

UM Library Fake News Course The slides for the LOEX 2018 session entitled Fake News, Lies, and a For-credit Class: Lessons Learned from Teaching a 7-Week Fake News Undergraduate Library Course can be seen on the right. An open Canvas version of the course is available as well. Look for a Canvas version of the course in the Commons if you are a Canvas campus. The Truth Is Out There: Fact-Checking Resources for Students Do you ever feel like you have slipped into an episode of "The Twilight Zone" or "The X-Files" when you see some of the “facts” your students share? Do you wonder where they found these “facts,” or how to convince students that they might not be using the most reliable of resources? Frightened by what your students consider to be "facts"?

History Assessments Beyond the Bubble unlocks the vast digital archive of the Library of Congress to create History Assessments of Thinking (HATs). Explore over 100 easy-to-use assessments that measure students' historical thinking rather than recall of facts. There are 10 “flagship” assessments, each marked with a ribbon. Flagship assessments (e.g., The First Thanksgiving) have extended features, including annotated sample student responses and “Going Deeper” videos that provide insights into the assessments and ideas for how to use them.

The Book Chook: Help Kids Detect Fake News by Susan Stephenson, www.thebookchook.com “Fake news” is a term that has exploded in popularity recently. It is often used to describe articles and memes that have been deliberately fabricated to manipulate opinion or misinform. Many educators prefer to concentrate on developing critical media literacy skills in students rather than buying into a debate over whether news is fake or not. However, I want the title of my article today to reflect what people may use in a Search.

How to identify fake news The illustration above, which shows reporters carrying various forms of fake news, was published way back in 1894 by pioneering cartoonist Frederick Burr Opper. He would have been blissfully unaware at the time of its creation, but he had just uncovered a powerful phrase that, 123 years later, would become word of the year for 2017 and which would define the credibility and legitimacy of the news, mass media and journalism throughout the 21st century. Rubber Duck Media explains below how to identify fake news and what can be done to prevent it spreading further and doing more damage.

Special Report: The Changing Face of Literacy There has never been a generation of young people more immersed in digital media than this one, many of whom learned to use a mobile device before they even started school. This special report examines how literacy instruction is changing in the digital age, from learning to sound out words in elementary school to grappling with “Macbeth” in high school. It finds that, while experts quibble over what it means to be digitally literate, they agree on one thing: even the youngest children should be learning literacy with a mix of print and digital texts. Is the digital revolution transforming literacy instruction in the nation’s schools?

The Hidden Audience of the Factitious News Game – Bob Hone Clever Workaround For Sara Hood, reference librarian at the Santa Fe Community College library, the original Factitious game wasn’t configured to support the information literacy workshops she presents at the college. That game version would pull 15 articles at random from a set of 45 possible articles to allow players to play the game multiple times. Hood wanted to structure her workshop around a specific set of articles … so she meticulously created screen shots of the articles she wanted to include and printed them out. The history of Hong Kong, visualized PUBLISHED August 26, 2019 Home to over seven million people, Hong Kong teems with life. For weeks, it has also roiled with pro-democracy protests as millions take to the streets to demand political self-determination and personal autonomy. They’re not the first: The history of Hong Kong is one of rapid growth, political turmoil, and continual demands for change. Here are 25 powerful moments from Hong Kong’s long history: Editor's Note: This article has been updated to reflect the demands of the protesters.

Boilerplate’s Origins Paul came up with the concept for Boilerplate years before the robot appeared in our books. Initially, he thought about using it in a graphic novel. That evolved into the idea of telling the robot’s story in a more “realistic” way, illustrated by doctored photographs and set against world history as a backdrop. In the year 2000, which for so long sounded like the future but is now in the past, Paul decided to post some robot stories on our website.