7 maps that will change how you see the world 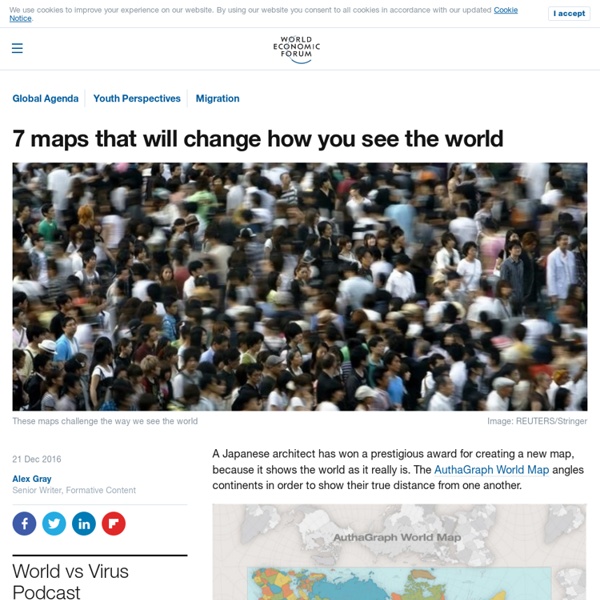 A Japanese architect has won a prestigious award for creating a new map, because it shows the world as it really is. The AuthaGraph World Map angles continents in order to show their true distance from one another. Hajime Narukawa won the Good Design Award, beating over 1,000 entries in a variety of categories. “The AuthaGraph World Map provides an advanced precise perspective of our planet,” explain the organizers of the award. Not only that, but the map can then be transformed into a globe. Why is this news? Ever since we first set sail to explore the world, humans have wanted to record what they saw and experienced. The map we are used to seeing depicts the world as flat, but it distorts the sizes of the continents, as this interactive map shows. For example, this still from the interactive map depicts the United States of America superimposed onto Brazil, and shows that the US barely covers it. Africa is a lot bigger than we think It’s a similar story with the African continent.

The world as 100 people, glimpsed over 200 years of history Max Roser, the Oxford economist behind Our World In Data, has devoted his career to spreading a statistically informed view of global development. Chart how things have actually changed over history, he says, and you'll see that we've come a long way. Roser recently released a commentary on the last two centuries. It sums up world progress with the following six charts: 3D-Mapping Denali and the Alaska Range - American Geographical Society “This Denali panorama was inspired by Austrian landscape panoramist and cartographer Heinrich Berann. The 2016 renaming of North America’s highest peak to its Alaska Native name, meaning “the great one,” motivated this map. The grandness of Denali and rugged expansiveness of the Alaska Range are captured by exploring the advantages and limitations of perspective, orientation, and vertical exaggeration in three-dimensional terrain. Unlike Berann, who often blended artistic ingenuity and natural realism when painting panoramas by hand, this map depicts a more realistic landscape with natural-color satellite imagery draped over the terrain. This innovative approach portrays the large scale of the formidable and dramatic wilderness from the perspective of a soaring bald eagle.

Australia vs U.S. with Australia flipped upside down Melbourne and Toronto Cold climate, cultural center, likes to think its a big city and a more cultured alternative to Sydney/ New York. Canberra and Washington DC National capital, short distance rom the biggest city. Temperate Seasonal climate, tending cold New York and Sydney Biggest City on the continent, surrounded by sattelite cities. Temperate, seasonal climate. All the bia acts come here. Home ownership: The home front Home ownership in the UK has changed dramatically in recent years. Benjamin Hennig maps variations across the country Housing has always been a decisive and sometimes divisive political issue. Home ownership has of course long been an aspiration for many people, and in the post-war period between 1953 and 1971 the number of households renting and owning reached an equal level, as documented in official census statistics for England and Wales. Ownership then surpassed renting, reaching its peak in 2001 at 69 per cent. In the decade that followed, this number went down to 64 per cent.

*****To Map A Mockinbird (To Kill Mockingbird) Modern classics don't come any more classic, or more modern, than To Kill a Mockingbird. Told from the naive perspective of a small girl, this tale of institutionalised racism in a small Southern town in the 1930s still resonates in today's America — and beyond. First published in 1960, it has sold over 40 million copies worldwide. In 2009, Mockingbird was voted "most inspirational book ever," beating the Bible into second place.

Faultlines, black holes and glaciers: mapping uncharted territories On a quiet summer evening, the Aurora, a 60ft cutter-rigged sloop, approaches the craggy shore of eastern Greenland, along what is known as the Forbidden Coast. Its captain, Sigurdur Jonsson, a sturdy man in his 50s, stands carefully watching his charts. The waters he is entering have been described in navigation books as among “the most difficult in Greenland; the mountains rise almost vertically from the sea to form a narrow bulwark, with rifts through which active glaciers discharge quantities of ice, while numerous off-lying islets and rocks make navigation hazardous”. Data The Atlas of Sustainable Development Goals 2018 presents maps, charts, and stories related to the 17 Sustainable Development Goals. It discusses trends, comparisons, and measurement issues using accessible and shareable data visualizations. The data draw on the World Development Indicators the World Bank's compilation of internationally comparable statistics about global development and the quality of people's lives. For each of the SDGs, relevant indicators have been chosen to illustrate important ideas. This contents of this publication are available as a PDF, the data are available in the World Bank's Data Catalog and the code used to generate the majority of figures are available on Github. The 2017 edition of the Atlas of Sustainable Development Goals can be found here.

House prices mapped: How moving one train stop away can save you £100k Buyers in search of good-value homes are opting to live near mainline train stations outside of the UK's major cities, says a new report. Online estate agent eMoov has mapped the average house price across every station in England, Wales and Scotland, with the figures showing that in some parts of the country, even moving one stop further away from a city hub can save buyers up to £120,000. It's no surprise that London families and first-time buyers priced out of the property market are increasingly looking to the suburbs and the commuter belt in their search to find better-value homes. A property near one of the capital's 14 major rail terminals now costs an average of £1 million, but by heading east to Stratford in Zone 2/3, average prices drop to £359,000.

A Network Map of the World's Air Traffic Connections View the high resolution version of today’s graphic by clicking here. In 2017, airlines moved over four billion passengers, a number that continues to grow each year. As more and more people around the world can afford to scratch their travel itch, new connections and airports will be created to meet that demand. Remarkably, the world’s air transport network doubles in size every 15 years, and the International Civil Aviation Organisation (ICAO) estimates that it will do so again by the year 2030. Mapping the Grim This was part of the original intent of the Public Archaeology project (for PA2015) and for me, because data is poetry and maps are fine prose. Due to the nature of my working life; the fact that I’m a bit of a butterfly/battering ram when it comes to how I approach things and get on with them it has been vaguely sidelined. A holiday got in the way for starters which inevitably because it was in Northern France set my Atlantikwall/D-Day/Cider/Cheese obsession flickering again so I spent a bit of time staring at concrete emplacements and imagining airdrops and all that malarky. So sorry for the delay for anyone who gives a stuff. Here it is, it is not finished in the slightest.

First hay fever map of Britain offers some relief to sufferers Sufferers could have relief from runny noses, sneezing and itchy eyes as scientists have developed the first ever hay fever map of Britain. The new, highly-detailed maps of the UK contain the location of key plants and trees known to produce pollen that triggers allergies and asthma. The maps, produced at the University of Exeter in collaboration with the Met Office, may help acute hay fever or asthma sufferers decide where to live or which areas to avoid at peak times when pollen is released. The study records areas where plants which hay fever sufferers are most likely to be sensitive to are most prevalent, including grasses, trees and plants such as birch, alder, oak and nettle.