Two Guys and Guy - Updates on Mondays, Wednesdays and Fridays 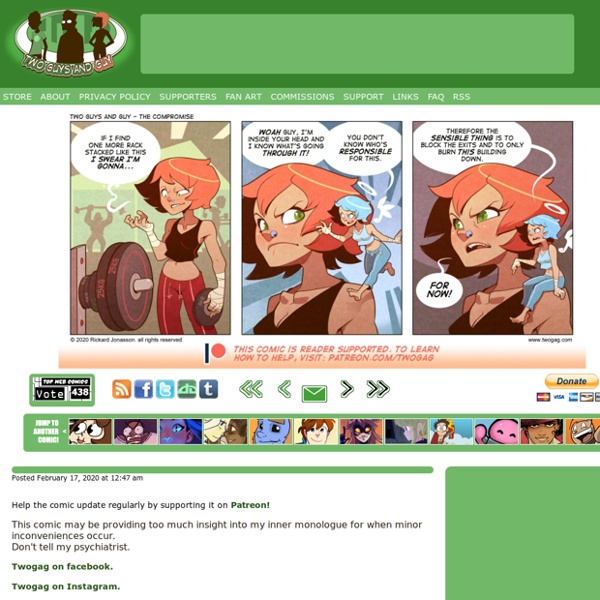 Sorry guys but no update this Friday, it’s been a crazy week! We’ve changed office at work and the new route to it got compromised by a train derailing Tuesday morning and made a mess of things. Basically it’s made my already unreasonably long commute to and from work twice as long and trice as uncomfortable, and it will continue to be until they repair that stretch of track. This week has basically been all about commutes, work and sleep, with too little of the later. I didn’t even make it back to my own bed Tuesday. Long story short, the excuse I’m trying to use is that I’m exhausted!

00-00: Prologue - Call of the Wanderer Community Continue to BOOK 2 HEXACOSM E-Mail the Author Juathuur@Facebook Forum Support the Comic Vote @ TWCVote @ ComicHovelTWCL Cats N' Cameras - Just when you thought it was safe to go to the photographer **Note to our Cameo guests, this strip was a bonus and does NOT count towards your cameo appearances** Hey Readers, Can’t help but thank you all enough for the fundraiser support as well as the cameo interest, thanks to all of you helping out I was able to order in Mackey’s new tablet a little in advance of the fundraiser completing it’s goals. So this weeks comic is brought to you in FULL COLOR !!

Comics This is a comic about the backfire effect. The first big expansion pack of Exploding Kittens is now shipping. It contains 20 game-changing cards, along with a human-sized cone of shame. I made a new thing. Next Page » A Girl and Her Fed I took a few mental health days last week. Which is to say that Brown put me in the car and took me someplace where Internet access was spotty at best, and told me to sit right there near the ocean and enjoy the frenetic peace of a near-infinite expanse of water, woman! So I did. I also finished a second POV for the Shawn/Rachel Kickstarter bonus story (League Night), did some art, got some writing done on another story, and drew another comic. I think I've been a little burned out. Email answering day tomorrow, and see you on Thursday! Comics at Daily Kos (Click to enlarge) There were so many mind-blowingly illogical quotes in Roberts' McCutcheon v. FEC opinion, it was hard to pick just one for the cartoon. Another classic:

KissWood Manga - Read KissWood Manga Online for Free Status: Completed Rank: 3641st, it has 21,978 monthly views. Rating: Fantasy Webcomic Comic Graphic Novel It’s finally time to present the submissions placed between the positions 13 and 25 of the Sandra and Woo and Gaia artwork contest. There are some great works of art to be seen here, partially thanks to the extension of the submission period. I would like to thank all artists who have submitted a drawing or other piece of art. I think I love a Derp. Noch einmal! → thosecomics: What it Takes, by KEZ. A SpiderForest comic. I'm with you, Colbs. Few things piss me off more than wearing a freaking pantsuit. What is even with that name? It's a suit. D'uh it has pants.