*Find the Learning in Any Game 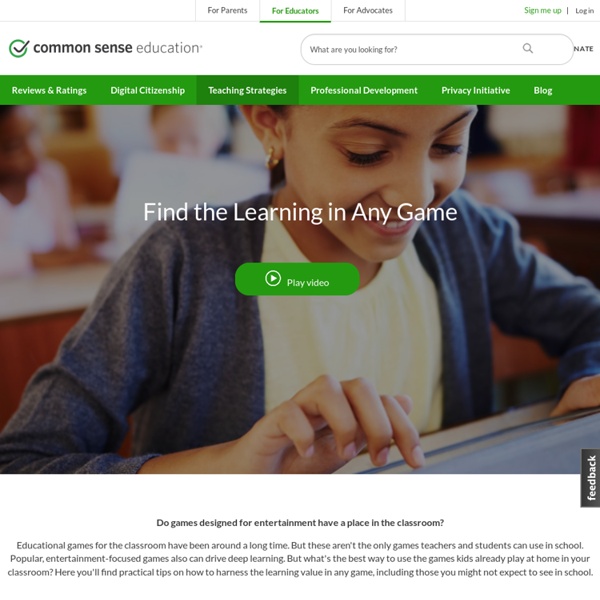 Educational Escape Rooms Engage Students with Innovative Puzzles and Tasks - The Atlantic Shauna Pollock, a Toronto-based educator and the author of Creating Classroom Magic, a book about using the Disney-inspired principles of magic, safety, and courtesy in teaching, believes educational escape rooms have enormous potential to be effective in schools, since they can be adapted to any subject. “[They can] excite learners and help develop their skills, teaching them content through immersive, engaging play,” she wrote in a recent paper. This style of puzzle-based learning is well suited for web-based games, which also provide access to a larger audience. In 2012, Arizona State University trialed this by building Science Detectives: Training Room Escape, a click-through online escape room for preK-12 learners.

VISTA's Year in Health Sciences Our mission is to revolutionize the way people think about learning. “People learn best when they are pursuing goals that they really care about and when what they learn helps them attain their goals. The best means of learning has always been experience.” -- Roger Schank Engines for Education, a non-profit founded by Roger Schank, was formed in 2002 to create new learning environments to replace out-dated and wrong-headed educational notions. At Engines for Education, we believe that we can replace boring and increasingly irrelevant schools with new exciting learning environments. We are attempting to chang e both what and how children learn .

ABC OF GAMIFICATION – ED Blog Knowledge Sharing Gone are the days of going through hours of learning content sitting back-to-back on your desktop. Today, you can quickly learn on your smart phone while travelling to work. The game-player’s hat (Barbara Braxton) As the cooler days of Australia’s winter encroach, more and more students make their way to the library as a warm haven during recess and lunch breaks. But to expect them all to want to curl up and read for that time may be a bit ambitious so this is a perfect opportunity to introduce them to some of the “old-fashioned” board and card games of yesteryear. Those of us of a certain vintage may well remember the family nights where televisionwas turned off (if there were a television) and games like Monopoly, Scrabble and Squatter would be set up or a lively game of cards would ensue. As well as being entertained, we absorbed the social niceties of taking turns, sharing, patience and how to lose gracefully while learning to think strategically, plan ahead, and know enough maths to keep the scorer/banker honest. Like traditional fairytales, the best games always had something to teach us.

Using Labs When you join NOVA Labs, you'­ll be actively participating in science. The data are real. The questions are real. The challenges you'­ll encounter are the same challenges that scientists and engineers are grappling with today. Whether you have 10 minutes, a few hours, or the time to stay involved for weeks or months, NOVA Labs provides a variety of opportunities for you to participate in the scientific process. Breakout EDU Brings “Escape Room” Strategy to the Classroom A class about to open their locked Breakout EDU box during a game. Photo by Stephanie Harman Escape rooms have been popping up all over the country. That’s where a group of people are willingly locked in and given an hour to “break out.” They follow clues posted or hidden in the room, sidestep the red herrings, and work together to beat the clock. The startup Breakout EDU has developed a way to use this playful, exciting model in the classroom environment with kits.

Epic Guide To Game Based Learning Games are fun. We can use them to teach. It isn’t that hard. Game based learning excites learning in my classroom. It can ignite your classroom too. In this post, I’ll share what I’m doing in my classroom. Modeling Introduction Abstract. Mathematics has been described as the science of patterns. Natural science can be characterized as the investigation ofpatterns in nature. Central to both domains is the notion of model as a unit of coherently structured knowledge. Modeling Theory is concerned with models as basic structures in cognition as well as scientific knowledge. It maintains a sharp distinction between mental models that people think with and conceptual models that are publicly shared.

TPiB: Locked in the Library! Hosting an escape room program at your library Puzzles, mystery, a darkened library, a time limit, and the ominous feeling that a ghost just might be looking over your shoulder? Yes, please! My library is this gorgeous 80+ year old building that’s been expanded thoughtfully so that the original building–a one-room stone space with tall windows, a fireplace, and impressive oak doors–has been preserved as a reading room. It’s not a place teens have much opportunity to enjoy unless they’re quietly studying for finals all alone. It’s quiet.

Playing games at the Library: Seriously? 1. Introduction “Man only plays when in the full meaning of the word he is a man, and he is only completely a man when he plays” (Schiller, 1902). 25 years after Ray Oldenburg (1989) described his “third place” theory, French academic libraries started developing game practices with their publics. Independent Checksheets We have set up, by necessity, an Independent Scientology course room, not affiliated with DM's because we want to practice Scientology and due to DM's 'Unclean Hands' (a doctrine in equity) we have been compelled to do so. We can't get Standard Scientology from DM's church anymore, because it isn't there and because he prevents us from getting it. So, here we are, with a First Amendment right, to practice our chosen religion, as guaranteed by that First Amendment and also put forth by L. Ron Hubbard himself in the Articles and Bylaws of CST differentiating a Church of Scientology (including RTC) from the 'religion of Scientology'. These Independent Checksheets (IC) were compiled by Dan Koon, Class VI Auditor who worked with LRH in Ron's Technical Research and Compilations (RTRC) based on LRH's 1978/1987 Checksheets on which tens of thousands of standard auditors were successfully trained. LRH personally trained Dan on the TRs.

Library Media Tech Talk: Library Orientation Breakout EDU Planning (Kaitlyn & Stony) We actually started talking about this potential early in August. Tiffany Whitehead even brainstormed with us in a webcam session prior to school starting. Board Games in the Library – Teen Services Underground When the average person thinks of board games, they likely think of games like Sorry, Monopoly, and Risk. While Risk certainly has some strategic elements, and it could be argued that Monopoly has a few as well, the central theme of these games is luck. Luck is a common theme in many popular American board games, but when you play a game for two hours and land on Boardwalk with a hotel because of a bad dice roll, one may be excused if they get a bit upset with grandma for building up the property so quickly while you just built your first house on Baltic. Not that I’m bitter or anything.