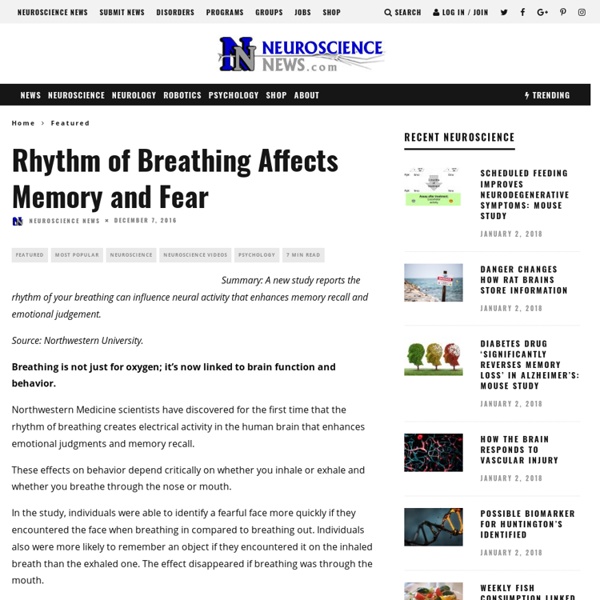 Summary: A new study reports the rhythm of your breathing can influence neural activity that enhances memory recall and emotional judgement. Source: Northwestern University. Breathing is not just for oxygen; it’s now linked to brain function and behavior. Northwestern Medicine scientists have discovered for the first time that the rhythm of breathing creates electrical activity in the human brain that enhances emotional judgments and memory recall. These effects on behavior depend critically on whether you inhale or exhale and whether you breathe through the nose or mouth. In the study, individuals were able to identify a fearful face more quickly if they encountered the face when breathing in compared to breathing out. The study was published Dec. 6 in the Journal of Neuroscience. The senior author is Jay Gottfried, professor of neurology at Feinberg. The amygdala is strongly linked to emotional processing, in particular fear-related emotions. About this memory research article Abstract

RELEASING PAIN Directed by Matt Holwick Releasing Pain "We're not supposed to spend our time healing, we're supposed to heal to live." 5 Simple Self Care Steps to Heal Shame Shame is that silent cringe that ties your power up in a knot. It is that crippling energy that dampens the pleasures of life. We’ve all had moments of shame, maybe you said something mean in a heated moment, maybe you didn’t honor a commitment you made, or maybe something just happened that you felt responsible for and it didn’t go well. Of course, there is healthy shame, which is the awareness that you’ve done something, that if given the opportunity to do it again you’d do it differently. Healthy shame creates the opportunity to learn and grow from our mistakes.

The Science of How Our Minds and Our Bodies Converge in the Healing of Trauma Trauma, Van der Kolk notes, affects not only those who have suffered it but also those who surround them and, especially, those who love them. He writes: One does not have be a combat soldier, or visit a refugee camp in Syria or the Congo to encounter trauma. Trauma happens to us, our friends, our families, and our neighbors. Research by the Centers for Disease Control and Prevention has shown that one in five Americans was sexually molested as a child; one in four was beaten by a parent to the point of a mark being left on their body; and one in three couples engages in physical violence.

Echo Parenting & Education Loss of safety: The world becomes a place where anything can happen. Loss of danger cues: How do you know what is dangerous when someone you trust hurts you and this is then your ‘normal?’ Loss of trust: This is especially true if the abuser is a family member or a close family friend. Shame: Huge, overwhelming, debilitating shame. As a child, even getting an exercise wrong at school can trigger the shame. Warm or Cold Water? Make Your Choice and See What Happens to Your Body - Goodfullness It’s recommended we drink 64 ounces of water each day. But did you know there are pros and cons for consuming both cold and warm H2O? Turns out water isn’t just water. Here are some arguments for each case and their health benefits and side effects. Most people prefer drinking colder water.

Ppl often stay in abusive relationships bc of something called 'trauma bonding' — here are the signs it's happening to you ian dooley / Unsplash People often don't even realise they are in an abusive relationship. It can be hard for others to understand why someone stays with an abusive partner. It's often because of something called "trauma bonding," where you become addicted to the hormonal rollercoaster an abuser sends you on. The Three Faces of Victim – An Overview of the Drama Triangle By Lynne Forrest Whether we know it, or not, most of us react to life as victims. Whenever we refuse to take responsibility for ourselves, we are unconsciously choosing to react as victim. This inevitably creates feelings of anger, fear, guilt or inadequacy and leaves us feeling betrayed, or taken advantage of by others. Victim-hood can be defined by the three positions beautifully outlined in a diagram developed by a well respected psychiatrist, and teacher of Transactional Analysis, named Stephen Karpman. He calls it the “Drama Triangle,” I refer to it as the victim triangle.

Therapy Tools for Sexual Trauma Design Academy Eindhoven graduate Nienke Helder has created a set of sensory objects that can be used to rehabilitate women affected by sexual abuse. Presented at this year's Dutch Design Week, Sexual Healing is designed to help women who are suffering from trauma-induced sexual problems, such as pelvic muscle blockage. According to the designer, current treatment available often focuses on a clinical perspective – putting too much emphasis on physical issues, rather than the psychological aspects of trauma. From her own experience, Helder recognised the frustration this can cause, which prompted her to develop an alternative therapy which focuses more on the emotional aspects of sexual trauma. "I was really frustrated with the way we treat these kinds of issues. In my opinion, the treatments that I got only made it worse," she told Dezeen.

Why Are So Many Adults Today Haunted by Trauma? Sixty percent of adults report difficult childhood experiences, including drawn-out divorces, violence, and abuse. The effects of trauma are long-lasting, ranging from anxiety to post-traumatic stress disorder to physical illness. But according to Dr. Gabor Mate, focusing solely on the role of family in childhood trauma misses the bigger picture. What if trauma also results from a shortcoming on the part of society to support families in thriving? If society helped informed teachers and parents meet children’s basic human needs for attachment and connection, would we produce fewer traumatized adults?

Our Obsession with Releasing is Hurting Us. get elephant's newsletter Language around “release” and “letting go” pervades the movement and healing world, but what do we mean by these words? When language become habitual, our wisdom should guide us to step back and examine it carefully. According to the Oxford Dictionary, the definition of release is: “allow or enable to escape from confinement; set free.” But before we focus on releasing tension, we need to understand why the tension, pain, or restriction is there in the first place.

6 Evidence-Based Ways Drumming Heals Body, Mind and Soul By Sayer Ji Contributing Writer for Wake Up World From slowing the decline in fatal brain disease, to generating a sense of oneness with one another and the universe, drumming’s physical and spiritual health benefits may be as old as time itself. Drumming is as fundamental a form of human expression as speaking, and likely emerged long before humans even developed the capability of using the lips, tongue and vocal organs as instruments of communication. To understand the transformative power of drumming you really must experience it, which is something I have had the great pleasure of doing now for twenty years.