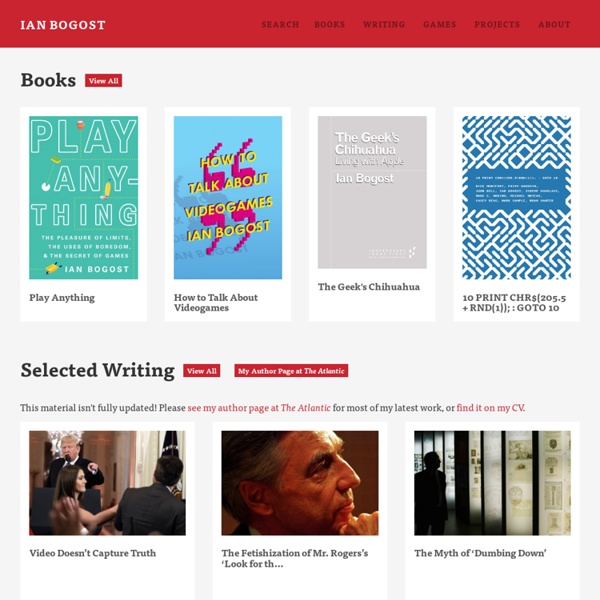 Gamification: What it means and how you can use it A group of scientists were struggling to solve a thorny problem: They were studying the structure of an enzyme similar to HIV, trying to understand the stability of the enzyme. This is a very hard problem, and traditionally scientists used to run computer simulations to try out various structures to study how stable they were. Since there can be billions of different ways the structure could form, computationally this was a very expensive and very long process. This particular problem had stumped the scientists for over 15 years. Until one of the scientists had a brilliant idea: Evaluating the structure and the stability of the protein was a very intuitive task, something that computers are horribly bad at – but at which humans are very good at. So, they invented a game around it called “FoldIt”, where players could manipulate the enzyme, and would get points if their enzyme was stable.

Persuasive Games A book about how videogames make arguments: rhetoric, computing, politics, advertising, learning. Videogames are both an expressive medium and a persuasive medium; they represent how real and imagined systems work, and they invite players to interact with those systems and form judgments about them. In this innovative analysis, Ian Bogost examines the way videogames mount arguments and influence players. Drawing on the 2,500-year history of rhetoric, the study of persuasive expression, Bogost analyzes rhetoric’s unique function in software in general and videogames in particular. The field of media studies already analyzes visual rhetoric, the art of using imagery and visual representation persuasively.

HOW TO: Use Game Mechanics to Power Your Business Shane Snow is a regular contributor to Mashable and tweets at @shanesnow. This post was co-authored by Phin Barnes, a principal at First Round Capital, SneakerheadVC and creator of the Xbox game, Yourself!Fitness. He has also served as a consultant to MTV games. How Gamification Works - 3D GameLab Instead of courses consisting mainly of textbook learning and lectures, classes built using game mechanics such as badges, experience points, levels and leaderboards, boost student engagement by allowing students to choose from “quests” and progress at their own pace through a series of educational activities. Students are motivated due to personal choice and meaningfulness, real-time feedback, the ability to collaborate or compete, and over time, they learn stay persistent in learning due to prior successes. Quest tasks can range from listening to a podcast, collecting and analyzing real-time data, or watching a short video to partnering with a classmate for discussion or writing a short essay. As students complete each quest, they can level up to new assignments on their journey toward an “A.”

Bartle's Taxonomy of Player Types (And Why It Doesn't Apply to Everything) Richard Bartle co-created MUD (Multi-User Dungeon), the text-based precursor to today's MMORPGs, while studying at Essex University. He ended up formulating the theory that all MUD players could be broken down into four main types: killers, achievers, explorers, and socializers. This theory has since been used in all sorts of game design situations where it doesn't apply - let's look at what exactly it does tell us. MUD is a text-based adventure game (no graphics at all, only text) that had the then-unique attribute of being able to be played alongside other human players. It was one of the first online persistent worlds created, and you can still grab a MUD client today, connect to a server and play.

Octalysis: Complete Gamification Framework - Actionable Gamification - Quora Octalysis: Complete Gamification Framework Gamification is design that places the most emphasis on the human in the process. In essence, it is Human-Focused Design (as opposed to “function-focused design”). Most processes design around function and efficiency – they try to get the job done as quickly as possible. Games, however, have a sole focus of pleasing the “human” in the process. Game Studies - Home Welcome to the official site of the ICA Game Studies Division (GSD)! The study of games and the game experience offers opportunities for the study of human communication that involve multidisciplinary approaches that merge the disciplines of conventional communication studies and research, arts and visual design, cognitive studies, computer sciences, cultural studies, engineering social sciences, health sciences, and information design. Although the common ground for the Game Studies Division is digital and video games, the group encompasses a broad range of inquiry topics and methods. The group serves as fertile meeting ground for the exchange of ideas among a very broad spectrum of disciplines and hosts a number of activities at ICA's annual conference. As the 2015 ICA Puerto Rico conference has passed, the Division is not actively accepting paper or panel proposals.

Game Studies 2015 Self-Reflexivity and Humor in Adventure Games by Krista Bonello Rutter Giappone This article focuses on the “adventure game” genre, its metafictional humor, and tendency towards self-parody in both its formative stage and its more recent ensuing nostalgic turn, with particular reference to Zork (Infocom, 1980), LucasArts’ Monkey Island games (1990-2000), and Telltale’s parodic-nostalgic “Reality 2.0” (Sam and Max, 2007). [more] The Demarcation Problem in Multiplayer Games: Boundary-Work in EVE Online's eSport

How Brands Are Using Facebook Apps for Contests and Campaigns Background: Some time back I published a research paper about how brands are using Facebook apps for enhancing their CRM. In this post I would like to focus on the second value proposition that Facebook apps bring to brands – an amazing opportunity to run campaigns. I have been increasingly seeing brands using Facebook apps to give a boost to their marketing. In fact if you see the list of Facebook preferred developer consultants, you will see some very interesting case studies of brands using Facebook apps. Flow Theory Flow theory was proposed by Mihalyi Csikszentmihalyi to describe the experiences of intrinsically motivated people, those who were engaged in an activity chosen for its own sake (Csikszentmihalyi, 1975, 1997). Such activities were viewed as worth doing just for the sake of doing them rather than as means to another end. While other research on intrinsic motivation focused on behavioral outcomes, Csikszentmihalyi attempted to describe the quality of subjective experience, or how intrinsic motivation felt.

The Ludologist These are some comments from my keynote at Rutger’s Extending Play conference in 2016, co-presenting with Shaka McGlotten. Hasn’t our sense of play suddenly become quite dark? There is a change in our primary conceptions of playing, and game-playing. In Brian Sutton-Smith’s Ambiguity of play, he lists 7 common rhetorics of play, meaning 7 common ways in which play is framed.

Trip's GeoAdventures If there was ever a cache that everyone should try once, pict-o-caches would likely be near the top of the list. They take aspects of several different types of caches and join them together to make a cache that everyone can participate in and enjoy. But how do they work?