The Fourth Industrial Revolution: what it means and how to respond 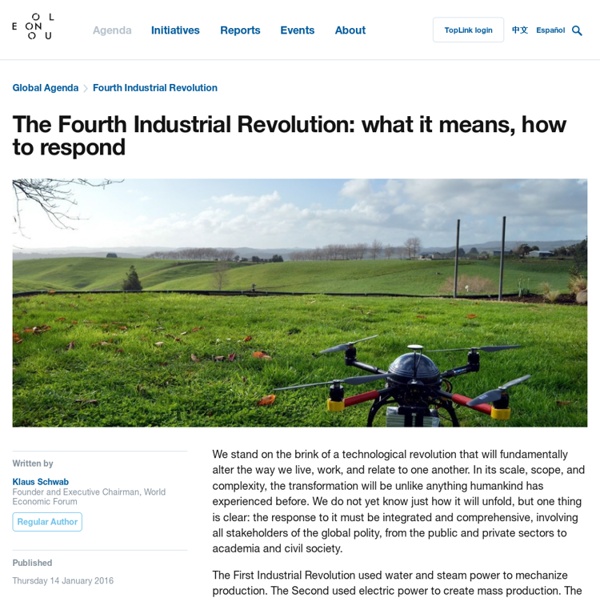 We stand on the brink of a technological revolution that will fundamentally alter the way we live, work, and relate to one another. In its scale, scope, and complexity, the transformation will be unlike anything humankind has experienced before. We do not yet know just how it will unfold, but one thing is clear: the response to it must be integrated and comprehensive, involving all stakeholders of the global polity, from the public and private sectors to academia and civil society. The First Industrial Revolution used water and steam power to mechanize production. The Second used electric power to create mass production. The Third used electronics and information technology to automate production. There are three reasons why today’s transformations represent not merely a prolongation of the Third Industrial Revolution but rather the arrival of a Fourth and distinct one: velocity, scope, and systems impact. Challenges and opportunities But such an approach is no longer feasible.

CULTIVATE 11/10/17 Stakeholders strategize ways to prevent MLN in West Africa Press release by International Institute of Tropical Agriculture. Stakeholders came together in a workshop to discuss and prioritize action plans for preventive control of the Maize Lethal Necrosis (MLN) in maize production, on 26 September at IITA, Ibadan. The workshop titled “Strategic planning to prevent spread of Maize Lethal Necrosis” aimed to raise awareness about the status of MLN spread and progress towards control in affected regions in East Africa. The MLN disease, which appeared in the region in 2011, was first reported in Kenya. The disease has caused major losses to maize crops of up to 90%, resulted in an estimated grain loss of 126,000 tons valued at $52 million in Kenya alone, and decreased food security.

This Week’s Awesome Stories From Around the Web (Through July 20) Boston Dynamics’ Robots Are Preparing to Leave the Lab—Is the World Ready?James Vincent | The Verge “After decades of kicking machines in parking lots, the company is set to launch its first ever commercial bot later this year: the quadrupedal Spot. It’s a crucial test for a company that’s spent decades pursuing long-sighted R&D. And more importantly, the success—or failure—of Spot will tell us a lot about our own robot future. new school subjects prepare SA for the Fourth Industrial Revolution? In 2018 President Cyril Ramaphosa called on the country to urgently develop its capabilities in the areas of science, technology and innovation. He reiterated this idea during his State of the Nation Address and at the ANC’s Limpopo provincial manifesto launch in Thohoyandou. “It will take five years for learners to get tablets. But the most important thing is that our children must get a better education,” said Ramaphosa. Some people criticised Ramaphosa saying that tablets were not the solution for the future of education.

The BIQ House: first algae-powered building in the world Project summary Situated in Hamburg, Germany (Am Inselpark, 17), the "building with Bio-Intelligent Quotient" (BIQ ) is the first algae powered building in the world. BIQ is a cubic, five-storey passive house with two differently designed façade types. The sides of the building that face the sun have a second outer shell that is set into the façade itself. Microalgae – tiny plants, no larger than bacteria – are produced within this shell, enabling the building to supply its own energy. This façade is the first of its kind. Michaelyn Bachhuber Baur – Sustainability Leaders Network Over the last 29 years, Michaelyn has worked at the intersection of sustainable development, agriculture & trade, delivering cutting edge solutions for transformative change. Along her professional path, she has served as a Peace Corps volunteer, an organic farmer in Washington state, as Guatemala Country Manager for a pioneering global organic & fairtrade spice & coffee company, and as Head of Producer Services in Latin America for Fairtrade International. More recently, Michaelyn has led the strategic development and growth of Solidaridad Network’s Central America, Mexico & Caribbean Regional Expertise Center in her role as Managing Director. Michaelyn’s work engages her along the entire supply chain, from smallholder producers to large agroindustrial actors, traders, multinational corporations, and consumers, and her expertise spans many sectors, including coffee, cacao, sugar, palm oil, livestock, vanilla, gold, spices, and non-timber forest products, among others.

The Conscious Competence Ladder - Learning Skills from MindTools.com Also called the Conscious Competence Matrix, the Learning Matrix, and the Four Stages of Learning © GettyImagesstocknroll Take the first steps on the "Ladder of Learning." When we learn new skills, we experience different emotions at different stages of the learning process. Apollo 11 Moon Landing: Photos From 50 Years Ago On July 20, 1969, the astronaut Neil Armstrong became the first human being to walk on another world, famously marking the moment with the phrase: “That’s one small step for [a] man, one giant leap for mankind.” After months of preparation, preceded by years of development and testing, the crew of NASA’s Apollo 11 lifted off from Florida on July 16, arriving at the moon on July 19. While Command Module Pilot Michael Collins remained in lunar orbit, Armstrong and Lunar Module Pilot Edwin “Buzz” Aldrin descended to the surface and spent two and a half hours on the moon, setting up experiments, taking photos, and gathering samples. After their safe return home, the crew were celebrated by politicians and the public as they embarked on a 45-day goodwill tour, visiting a total of 27 cities in 24 countries. Below, 50 photos of the historic Apollo 11 mission, on the 50th anniversary of that giant leap. Editor’s Note: This article is part of a series reflecting on Apollo 11, 50 years later.

Fourth Industrial Revolution & the Impact on Education Fourth Industrial Revolution & the Impact on Education January 16, 2018 1:00 – 2:00 pm ET New technologies like artificial intelligence, 3D printing, and robotics are emerging with the potential for having a transformative impact on industry, the economy and society as a whole. The speed and scope of this technological transformation is exponential with the potential for unlimited possibilities and endless opportunities. "My secretary will fax you the details" In a recent social media post, ELT writer Katherine Bilsborough was bemoaning the appallingly sexist images that came up when she was searching for secretary on a stock image site. I won't share the images, but I'm sure you can imagine the kind of thing. The post prompted a lot of equally appalled reactions about the actual images, but there were also a couple of comments about whether we even use the word secretary anymore anyway. Which, of course, got me thinking and sent me off to check ... My immediate reaction and that of several people I spoke to was that secretary, to describe someone who does an admin job, has been replaced as a job title nowadays by 'assistant' of some kind - admin assistant, personal assistant, executive assistant. A bit of googling very quickly turned up several articles to back up my hunch.