Paul Ford: What Is Code? 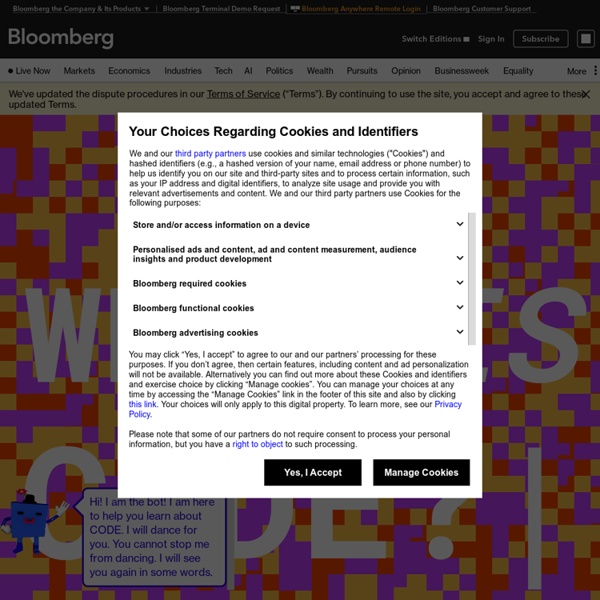 A computer is a clock with benefits. They all work the same, doing second-grade math, one step at a time: Tick, take a number and put it in box one. Tick, take another number, put it in box two. Tick, operate (an operation might be addition or subtraction) on those two numbers and put the resulting number in box one. Tick, check if the result is zero, and if it is, go to some other box and follow a new set of instructions. You, using a pen and paper, can do anything a computer can; you just can’t do those things billions of times per second. Apple has always made computers; Microsoft used to make only software (and occasional accessory hardware, such as mice and keyboards), but now it’s in the hardware business, with Xbox game consoles, Surface tablets, and Lumia phones. So many things are computers, or will be. When you “batch” process a thousand images in Photoshop or sum numbers in Excel, you’re programming, at least a little. 2.1 How Do You Type an “A”? It’s simple now, right?

Related:  Programmation • Empty Dropzone • Why or Why Not • EduOnline • Learning Code

47 of The Best Places to Learn to Code For Free Please note: all information, topics taught, etc., have been taken at time of updating (July 2018) and are definitely subject to change. Thanks! Classpert is a search engine that helps you find and compare online courses in computer science, data science, business, and more. With over 140,000 free and paid courses from more than 30 course providers, you’ll be spoilt for choice. I'm Not Male. I'm Not Female. Please Don't Ask Me About My Junk. You'd be surprised how many people ask me about my crotch. It's a lot. I have had people ask me which "parts" I have, how they look, what I plan to do with them.

Mo Ganji Incredible Line Tattoos click 2x In 2015, we were mesmerized by Berlin-based artist Mo Ganji‘s collection of simplistic yet stunning line tattoos. Rendered only in black ink, each minimalist tattoo is created using a single, continuous line. Even with such a limited composition, Ganji is able to aptly represent and capture the recognizable contours of people and animals. In order to “create simple images with a strong impact,” Ganji employs a characteristic aesthetic that is understated yet bold. With only a single line curved into various shapes, the artist is able to compose one-of-a-kind portraits that beautifully adorn the skin. In addition to minimalist faces and figure studies, the artist also finds inspiration in wildlife.

Experts Say Class Size Can Matter for Online Students As an undergraduate pursuing a bachelor's in nursing, Ronda Clark was accustomed to taking online classes with 30 or 40 other students. She checked in to discussion forums as required, but felt she didn't have meaningful interaction with her fellow classmates. "It was a free-for-all," says Clark, a military spouse who lives on the Marine Corps base in Quantico, Virginia. "There was little organization." So Clark was pleasantly surprised by the family nurse practitioner online master's program at Massachusetts' Simmons College, which she started in 2013. Brief History of the Internet - Internet Timeline Barry M. Leiner, Vinton G. Cerf, David D. Clark, Robert E. Kahn, Leonard Kleinrock, Daniel C.

New Year's Resolution: Learn to Code A year ago I didn't know how to code. I had a journalism degree and had made some graphics, but I would have been hard-pressed to explain the difference between Ruby and JavaScript, and I was pretty happy when I got the YouTube video to embed correctly. I considered myself pretty technical but generally avoided the command line. When I did start learning, I was amazed by how much was out there: introductory videos, explanatory blog posts, tips and tricks and step-by-step guides. If you're a journalist who wants to make a news app or a student interested in learning to code, you have plenty of paths to choose from.

She Must Be Kidding: Megyn Kelly Declares That Fox Is Not a Right-Wing News Channel Fox News host Megyn Kelly insisted in an interview over the weekend that her network had no “right-wing bias,” and that it was, in fact, “fair and balanced” like the slogan said. While speaking to CBS host Charlie Rose from her studio recently, the Fox News host blasted “most of news” for having a “left-leaning bias.” “You don’t believe there is a right-wing bias at Fox, a conservative bias at Fox?” Rose interrupted. Tiny Letters Tell Brutally Honest Truth And Inspire To Be Yourself "I don’t really feel I have that 'unique' style, but I’m in love with script and flourishes since actually I began with copperplate calligraphy at first," Dexa Muamar told Lettering Guy. "The way the letters connect is something special for me, and I can play with the flourish of course. And for now I feel more comfortable drawing at small scale. [It’s] usually at 3-4cm in width."

Faculty Load Editor’s Note: Most instructors find teaching online courses requires more time than traditional courses. Both teachers and learners agree there is usually more interaction between teacher and learner and among learners than in a traditional course. Dr. Tomei’s study measures the difference in instructor time for parallel version of a live vs. online course and establishes ideal class size. Computing the Ideal Class Size for Online Courses Franken-algorithms: the deadly consequences of unpredictable code The 18th of March 2018, was the day tech insiders had been dreading. That night, a new moon added almost no light to a poorly lit four-lane road in Tempe, Arizona, as a specially adapted Uber Volvo XC90 detected an object ahead. Part of the modern gold rush to develop self-driving vehicles, the SUV had been driving autonomously, with no input from its human backup driver, for 19 minutes. An array of radar and light-emitting lidar sensors allowed onboard algorithms to calculate that, given their host vehicle’s steady speed of 43mph, the object was six seconds away – assuming it remained stationary.