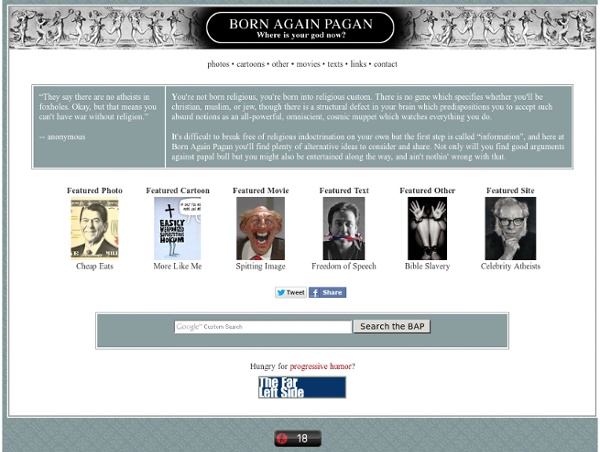 The Skeptic's Dictionary Atheist Foundation of Australia Inc | Founded 1970 ERS Charles Darwin and other early evolutionists were fascinated by religious phenomena and how they might be explained from an evolutionary perspective. Nevertheless, evolutionary theory became restricted to the biological sciences and excluded from the study of many human-related subjects for most of the 20th century. Only now is the theory being used to explain all aspects of humanity in addition to the rest of life. The new field of evolutionary religious studies is part of this larger trend. This website provides an introduction to the study of religion from an evolutionary perspective. It includes the following features: Please visit the EvoS web site for a more general introduction to evolution in relation to human affairs. This website is funded by a TARP (Templeton Advanced Research Program) grant from the John Templeton Foundation, which is administred by the Metanexus Institute. For questions and comments, contact the program director, David Sloan Wilson.