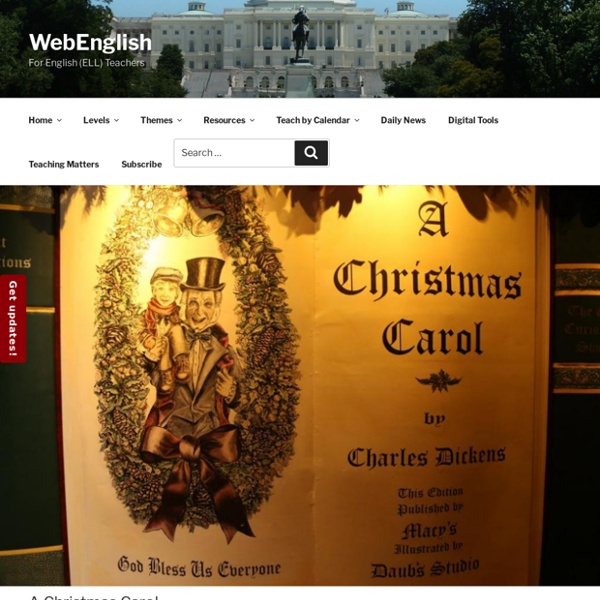 This Theme Page will be updated by Dec 1st. A theme page about Charles Dickens’ beloved story A Christmas Carol, with an array of videos from the year 1910 to 2019. Related topics: Winter Wonderland 1-9, Best of Christmas 1-4, Best of Christmas, 5-7, Best of Christmas, 8-B1, Background Warm-up Vocabulary Listening Listening/Reading Reading Lesson Plans Viewing (1910 – 2019) Focus on Form Quizzes This work is licensed under a Creative Commons Attribution-ShareAlike 4.0 International License

@Scholastic For Teachers | For Parents | For Kids Please add printables@message.scholastic.com to your address book. We hope you enjoyed receiving this message from Scholastic Printables. 'A Christmas Carol' Vocabulary Study List In his popular story, A Christmas Carol, Charles Dickens uses the musical term "stave" to indicate the chapters. Dickens was known, on occasion, to use clever terms to describe the sections of his books. For example, in The Cricket on the Hearth, he calls the chapters "chirps." To modern readers, "stave" might not be the only unfamiliar term in A Christmas Carol. You can refer to the following list of terms, separated by chapter, to help understand the text and grow your vocabulary. Some of the words may be familiar, but others are no longer in common usage.

Lesson plan: After helping Pilgrims, today’s Wampanoags fight for their ancestral lands Photo by REUTERS/Eduardo Munoz With the Thanksgiving holiday in mind, students will learn about the Wampanoag people, the ancestors of the Native American tribes who welcomed the Pilgrims at Plymouth nearly 400 years ago. Then students will examine current issues facing Wampanoags, including the continued fight for their ancestral lands and the preservation of their native language. For a faster version of this lesson or as a supplement, check out this slide deck prepared by Pear Deck. Subject(s)

Your year in review This activity for teenagers and adults at CEF level B1 and above asks students to imagine that they are a famous international or national personality and complete a series of short paragraphs to review the previous year and look ahead to the next year. Introduction This lesson is an opportunity to review and practise a wide range of narrative tenses and future forms. Why Britons are now dreaming of a green Christmas Everyone used to call Helen Tandy “the Grinch” at Christmas. She would get odd looks and long sighs from friends and family when she tried to explain that she didn’t want gifts and wouldn’t be buying any either. Christmas crackers – “a horrible waste: a bang, some tat and then it’s all chucked away” – were banned at her home. Shiny wrapping paper (which can’t be recycled) made way years ago for plain brown or newspaper, then, last December, she tried furoshiki – the Japanese art of fabric wrapping. Tandy’s artificial tree will next month be wheeled out for its 31st Christmas, and will be decorated from a carefully stored box of decorations handmade or collected, one by one, over the years. “I didn’t want to get to the end of Christmas Day and look around and feel like we’d made a week’s worth of waste in just a few hours,” says Tandy.

British Council LearnEnglish It's that time of the year for family, friends … and cheesy Christmas music. For many people, Christmas is quite simply (as an old pop song says) 'the most wonderful time of the year'. For others, it is an exhausting exercise in bad taste. So what does a British Christmas involve? Special days 32 Apps Dyslexic Students Will Love for Everyday Learning As the days of summer fun come to a close, thoughts of reading assignments, worksheets, and essays return to the forefront of many students’ minds. For students with dyslexia, work that requires reading and writing can be daunting, and it often saps the enjoyment out of school. Fortunately, more and more families and schools are discovering assistive technology (AT) and the ability it has to lessen stress and give children a greater sense of academic independence. While many schools have folded technology into the classroom, students are also increasingly using their own smartphones and tablets.

Antique Doll The Antique Doll is a scary story about a young girl who receives a strange gift on her birthday. On the morning of her birthday, Lucy’s mother woke her up and told her a package had arrived in the mail and it was addressed to her. The girl hurriedly unwrapped the gift and was horrified at what she found inside. Everything You Learned About Thanksgiving Is Wrong Not to rain on your Thanksgiving Day parade, but the story of the first Thanksgiving, as most Americans have been taught it — the Pilgrims and Native Americans gathering together, the famous feast, the turkey — is not exactly accurate. Thanksgiving facts and Thanksgiving myths have blended together for years like so much gravy and mashed potatoes, and separating them is just as complicated. Blame school textbooks with details often so abridged, softened or out of context that they are ultimately made false; children’s books that simplify the story to its most pleasant version; or animated television specials like “The Mouse on the Mayflower,” which first aired in 1968, that not only misinformed a generation, but also enforced a slew of cringeworthy stereotypes. High school textbooks are particularly bad about stating absolutes because these materials “teach history” by giving students facts to memorize even when the details may be unclear, said James W. And Plymouth, Mr.