The non-western books that every student should read 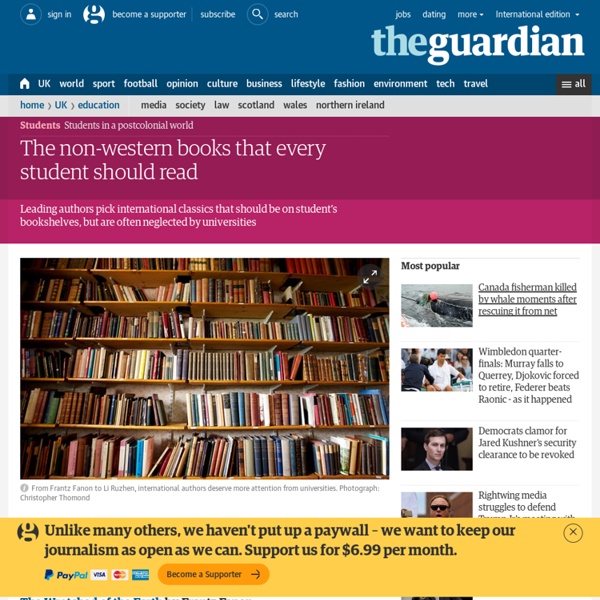 The Wretched of the Earth by Frantz Fanon I teach it to my first years and return to the book through their degree. It is the perfect introduction to complex ideas: oppressive socio-economic political structures, forms of resistance and defiance, and the point at which violence becomes justifiable. Students always find the book challenging, disturbing and thought provoking. And that is exactly what university syllabi ought to be! Sunny Singh, lecturer at London Metropolitan University and author of Hotel Arcadia Malgudi Omnibus by R K Narayan Every literature student should have space on her shelf for the complete works of R K Narayan. Monica Ali, author of Brick Lane, which was shortlisted for the 2003 Man Booker Prize Flowers in the Mirror by Li Ruzhen This Chinese novel from 1827 is a fantasy classic of the Qing Dynasty period, full of sophisticated philosophy, tense quest plot-lines and one of the most wonderful explorations of feminism I have ever read. Samskara by U R Ananthamurthy

Culture - The 21st Century’s 12 greatest novels 12. Jeffrey Eugenides, Middlesex (2002) What are the greatest novels of the opening years of this tumultuous century? Does Language Influence Culture? (Please see Corrections & Amplifications below.) Do the languages we speak shape the way we think? Do they merely express thoughts, or do the structures in languages (without our knowledge or consent) shape the very thoughts we wish to express? Take "Humpty Dumpty sat on a..." Even this snippet of a nursery rhyme reveals how much languages can differ from one another.

Extensive reading: why it is good for our students… and for us. What is Extensive Reading (ER)?Extensive Reading is often referred to but it is worth checking on what it actually involves. Richard Day has provided a list of key characteristics of ER (Day 2002). This is complemented by Philip Prowse (2002). Maley (2008) deals with ER comprehensively.

15 Books You Should Have Read in 2010 - Culture - GOOD - StumbleUpon Image by Jane Mount, Courtesy 20x200 Yes, we read Freedom this year and yes, it was good. As Esquire put it, it “was one great slab of a book, at a time when most books have given up on greatness.” But there were other books in 2010, books that had to compete for our ever more challenged attention spans and won. So we asked a few members of the GOOD team & some of our good colleagues which book made their best list this past year. (And since discovering something you might have missed is one of the great pleasures of reading, no selections were disqualified for having been published prior to 2010).

Fall in Love with This Teacher’s Text-Marking Activity Editor’s Note: Kim O’Bray’s colorful text marking activity is a key part of her close-reading process. Students engage deeply with the text by using colored pencils to mark everything from figurative language and unfamiliar vocabulary to central ideas and text structures. I really like this text-marking approach because it gets everyone on the same page and encourages students to ask questions and make their own connections. It works wonderfully with any nonfiction text. At the beginning of the year, I model each step for my students, especially for my 6th graders who are new to text-marking. By the time my students are in 8th grade, the process has become second nature.

Barack Obama's book recommendations: POTUS' reading list Whether he’s reading to kids at the White House, hitting up local bookstores on Black Friday, or giving recommendations to his daughters, President Barack Obama may as well be known as the Commander in Books. POTUS is an avid reader and recently spoke to the New York Times about the significant, informative and inspirational role literature has played in his presidency, crediting books for allowing him to “slow down and get perspective.” With his presidency coming to an end this Friday, EW looked back at Obama’s lit picks over the years — because it can’t hurt to read like a great leader. #ObamaForBookClubPresident2017, anyone? See a comprehensive list of every book Obama has recommended during his presidency: Books for Daughters:

Teens and reading skills Here are some activities you can use with students before, while and after reading a text. Before reading There are lots of activities you can do before students read a text to help enhance their comprehension, such as ones that activate the students’ schemata or background knowledge, arouse their interest in the topic or prepare them linguistically. A Chiefest Pleasure: Discovering The Sot-Weed Factor on its 50th Birthday Some of the chiefest pleasures in a lifetime of reading fiction are those moments when you stumble upon a gem of a book you somehow missed. This happens more often than we might care to admit because reading fiction is a lot like its distant cousin, the acquisition of knowledge: the more you do it, the less of it you seem to have done. There’s no shame in this. Lacunae are inevitable for even the most voracious and catholic of readers. The consolation is that the deeper you go into your life and your reading, the more precious the long-overlooked gems become once you finally unearth them.

Around the World in 80 Books: A Global Reading List Ready for some serious armchair travel? Take a trip around the globe with these books from the eighty most populated countries in the world. Afghanistan – The Kite Runner by Khaled Hosseini: An unlikely friendship forms between a well-to-do boy and the son of his father’s servant in the years leading up to the Soviet-Afghan War. Algeria – Algerian White by Assia Djebar: The author remembers three friends–a psychologist, a sociologist, and a dramatist–who were killed during the Algerian struggle for independence. Angola – Good Morning Comrades by Ondjaki: A twelve-year-old boy and his friends grow up during the confusing time of the Angolan Civil War. Argentina – He Who Searches by Luisa Valenzuela: A professor of semiotics disguises himself and visits a prostitute two days a week in order to psychologically analyze her without her knowledge.

The Landlady About this BritLit kit Billy Weaver, a young man visiting the City of Bath for the first time, is looking for accommodation. He is inexplicably drawn to a house where the landlady seems to be expecting him. The house and the landlady seem friendly and welcoming, and he looks forward to staying there. Signing the guest book, two names disturb him. Where has he heard them before? 50 Years of To Kill A Mockingbird Scout, Dill, Atticus and Boo – those names can only mean one thing. It's over 50 years since Harper Lee’s To Kill A Mockingbird, the ultimate literary one-hit wonder, was published by J. B. Lippincott & Co.

10 Essential African Novels We asked five novelists, each from a different African country and with a new novel out this spring, to select two of their favorite African novels. Here's what each picked. Links to PW reviews are provided when available. Odafe Atogun Photo Credit: Adebayo Adekunle In Taduno's Song, Nigerian author Atogun combines a retelling of the Orpheus myth with a Kafkaesque meditation on identity in a powerful novel about a musician who runs afoul of the ruthless Nigerian government.