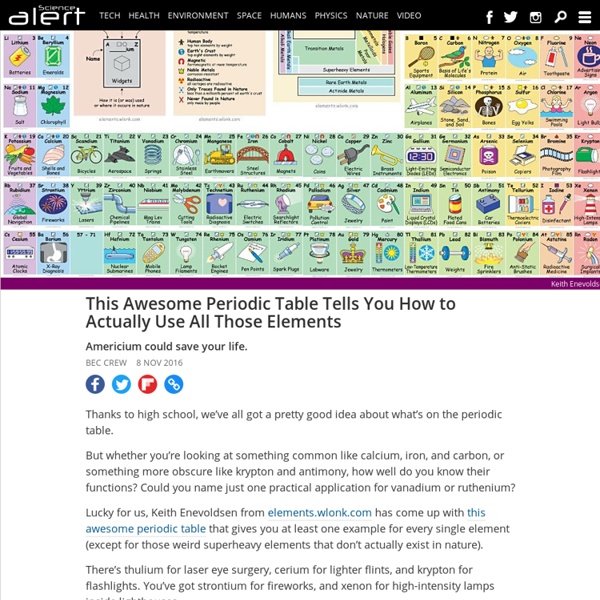 Thanks to high school, we’ve all got a pretty good idea about what’s on the periodic table. But whether you’re looking at something common like calcium, iron, and carbon, or something more obscure like krypton and antimony, how well do you know their functions? Could you name just one practical application for vanadium or ruthenium? Lucky for us, Keith Enevoldsen from elements.wlonk.com has come up with this awesome periodic table that gives you at least one example for every single element (except for those weird superheavy elements that don’t actually exist in nature). There’s thulium for laser eye surgery, cerium for lighter flints, and krypton for flashlights. You’ve got strontium for fireworks, and xenon for high-intensity lamps inside lighthouses. Oh and that very patriotic element, americium? First unveiled in 1945 during the Manhattan Project, americium is produced by bombarding plutonium with neutrons in a nuclear reactor. Keith Enevoldsen Check it out:

Kitchen gadgets review: Food Sniffer – ‘It smells fishy to me’ What? The Food Sniffer (£105, myfoodsniffer.com): organic chemical sensors housed in a plastic baton. Detects molecular decomposition in meat and fish. This awesome periodic table shows the origins of every atom in your body Here’s something to think about: the average adult human is made up of 7,000,000,000,000,000,000,000,000,000 (7 octillion) atoms, and most of them are hydrogen - the most common element in the Universe, produced by the Big Bang 13.8 billion years ago. The rest of those atoms were forged by ancient stars merging and exploding billions of years after the formation of the Universe, and a tiny amount can be attributed to cosmic rays - high-energy radiation that mostly originates from somewhere outside the Solar System. As astronomer Carl Sagan once said in an episode of Cosmos, "The nitrogen in our DNA, the calcium in our teeth, the iron in our blood, the carbon in our apple pies were made in the interiors of collapsing stars. We are made of starstuff."

A goldfish in a wheelchair conquers the internet – PlayGround+ Taylor Dean is a 19-year-old YouTuber from San Antonio, Texas, who uploads educational animal videos. Her friend Derek, 20, works at an aquarium shop in the same city. A customer recently came to Derek with a goldfish that was suffering from swim bladder disease – a disorder that prevents fishes from controlling their buoyancy in the water. When the bladder is infected or deformed it can cause a fish to float to the top of the water, swim upside-down, or lean heavily to one side.

Facebook pays 10-year-old Finnish genius $10,000 for exposing flaw in Instagram Facebook’s Mark Zuckerberg (Josh Edelson/AFP via Getty Images) A hacker in Finland has become the youngest person to receive a reward from Facebook’s Bug Bounty program — but he’ll have to wait three years before he’s old enough to humblebrag about it on the social media platform. Ten-year-old Jani, whose last name isn’t being shared at the request of his parents, uncovered a way to delete any given comment on Instagram, the photo-sharing company that Facebook bought for $1 billion in 2012 — and which Jani, so to speak, pwned. 11 of humanity's worst ever inventions Nuclear weapons, reality television and Donald Trump are things that we can probably all agree should never have set foot on planet Earth. But what about some of the more tragic human inventions? The good people over at Reddit decided to compile a list of some of humanity's less-than-stellar inventing moments. Here are some of the best/worst...

Make a Recycled Lava Lamp with Your Kids Last time I went on a household cleaning spree, I decided to clean out our family medicine cabinets. I found a lot of items left behind from previous house guests, items that my family doesn't use - but I didn't want to toss them in the trash. I started considering creative ways that I could use them. Inventions that changed our world « Chestnut ESL/EFL WORKSHEET: Best Inventions of the past 100 years (SOURCE: eslflow.com) ONLINE ACTIVITY: Inventors: Thomas Edison Watch the video and do online activity (SOURCE: englishexercises.org) In pictures: The household gadgets of yesterday AUDIO TEXTS: Listen to stories about inventors (SOURCE: realworldesl.blogspot.com) VIDEO SOURCE:efllecturer.blogspot.fr

Science Experiment: Liquid Rainbow in a Jar By Jessica Vician Photography by Jennifer Shaffer Photography Children love science, whether they know it or not. Retired NASA astronaut Scott Kelly comments on 'psychological stress' endured in space A retired NASA astronaut has said the "psychological stress" that results from being in space for a year is as damaging as the radiation he was exposed to each day. Scott Kelly, who returned from the International Space Station in March, has also commented on the possible health issues he faces in the future as a result of the trip. He said: “During my time in orbit, I lost bone mass, my muscles atrophied, and my blood redistributed itself in my body, which strained my heart.” Edible Slime or Gak (Chemical and Borax Free!) One of the things I love to do with this blog is to use my science background (I have an M. Ed in science education and used to be a middle and high school science teacher) to create new play recipes that are safe - and if possible, that are edible (I love the idea of creating sensory play that is great for all ages so that babies and toddlers can join their siblings in play without having to miss out on the fun). So far I've developed a Safe/Edible Glow Water, and Edible Mini Water Beads (with no choking hazard!), and an Edible Pretend (Melting!) Ice Cream Dough. We love to play with slime and gak around here and one of my toughest recipes to develop was this one - a totally edible and chemical/borax free slime.

How the Clouds Got Their Names By Maria Popova “Clouds are thoughts without words,” the poet Mark Strand wrote in his breathtaking celebration of the skies. And yet clouds are in dynamic dialogue with our thoughts beyond the realm of the poetic — psychologists have demonstrated that cloudy days help us think more clearly. Since our words give shape to our thoughts, it wasn’t until a young amateur meteorologist named and classified the clouds in 1803 that we began to read the skies and glean meaning from their feathery motions. In this animated primer from TED-Ed, Richard Hamblyn, author of The Invention of Clouds: How an Amateur Meteorologist Forged the Language of the Skies (public library) — the same scintillating book that traced how Goethe shaped the destiny of clouds — tells the story of how the clouds got their names, forever changing our understanding of that most inescapable earthly companion, the weather.

6th Grade Science Projects for the Classroom or Science Fair Hands-on projects and experiments in the classroom bring science to life, sparking a desire in students to explore and learn. Whether you’re prepping for a science fair or looking to impress your class with a spectacular demonstration or two, these 6th grade science projects are sure to be winners. 1. Extract DNA from a strawberry. It’s surprisingly easy to pull a strand of DNA from this sweet fruit.