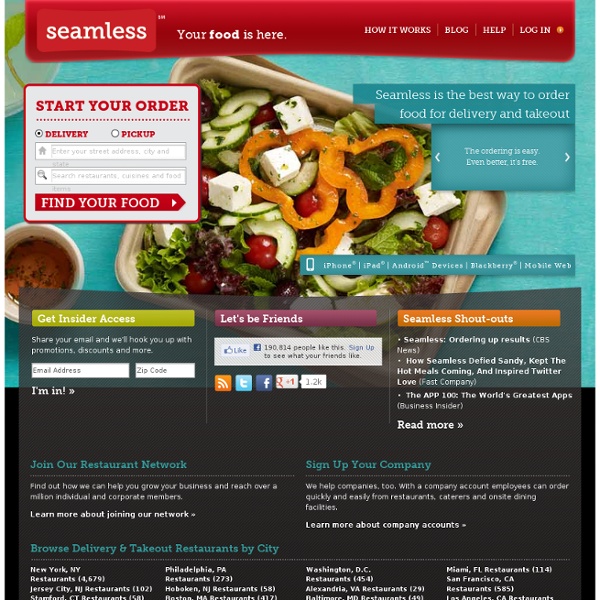 HealthyOut Is Like A Personal Nutritionist For Healthy Food Deliveries New York-based startup HealthyOut already has a popular iPhone and Android app for quickly finding nearby restaurants and dishes that users can order and have delivered. Today at Disrupt NY 2013, HealthyOut is unveiling a new service, which will provide users with personalized menus of food delivered to help them lose weight or just eat better overall. Launching first in New York City, HealthyOut’s delivery service is designed to provide users with healthy options two times a day, five days a week. By combing through the menus of restaurants around the city that deliver, HealthyOut will come up with 10 meals a week that can automatically be sent to a customer’s home or office. Now, there’s no shortage of food delivery services out there.

Restaurant in New York completely replaces menus with iPad 2 Don’t you just hate it when you go to a restaurant, place your order with the waiter, and after emphatically conveying to the waiter three times that you do not want parsley in your salad, it comes covered with the stuff? Granted sometimes it can be the chef’s mistake who may be so used to pushing out stock orders that he/she forgets that this order is slightly different, but perhaps this restaurant in New York will be able to cut down on waiter/waitress mistakes and improve efficiency. Located in New York City’s West Village, De Santos is a high-end Italian restaurant and they’re also apparently the first restaurant in New York to fully make use of the iPad 2 as a menu. Given that each iPad costs about $500, it does seem like a pretty expensive investment, but the owners are convinced that it will pay off itself eventually by streamlining orders, making the ordering system more efficient.

Task Management Software, Web Based Task Management by MangoSpring MangoApps is the most feature rich social collaboration platform on the market. It offers hundreds of features and modules that can be tweaked to suit your needs without any programming necessary. If you can check a box, you can customize MangoApps in minutes. Enterprise Social Networking Keeping everyone in the loop and connected Threaded Conversations.

Bar Power Is A Nightlife App To Help You Be Less Of A Jerk At Bars Once you’ve had a few drinks at a bar it’s easy to let loose and blow off steam. Unfortunately, while you’re having fun, you could end up annoying others around you, namely the staff at the venue you’re at. By acting like a fool, you’re jeopardizing your future visits, since bartenders tend to remember who was a jerk and who was a great customer. A project at our Disrupt Hackathon called “Bar Power” is an app that will remind you to “not be a douchebag.” It’s somewhat of a game, walking you through nice things to do when you enter a bar.

Kudzu Interactive Raises $7M To Bolster Growth Of Digital Ordering Service Snapfinger Kudzu Interactive, which ownes and operates online and mobile ordering and e-commerce service Snapfinger.com, has closed a $7 million Series B funding round. The round was led by Norwest Venture Partners, with additional but undisclosed investors participating. The company, founded in 2004, has now raised $11 million total to date. The funding news was announced by the company this morning, but the New York Times profiled Kudzu Interactive extensively over the weekend, reporting that the Snapfinger.com owner is already profitable and growing revenues fast. Jim Garrett, founder and CEO of Kudzu Interactive, says revenues grew 420% in 2009 and that it has more mobile applications and more restaurants integrated into more point of sale systems than “all of its competitors combined”.

Search for homes, apartments and houses for rent in New York, NY on Place of Mine Apartments for Rent in New York City! What is New York Like? New York City is the most populous city in the United States with 8,244,910 people in its 468.48 square miles, which brings the population density to 27,243.06 persons per square mile. This makes it the most densely populated city in the US, and with all these people also come over 800 languages spoken in the city. This makes it the world’s most linguistically diverse city in the world.

Grocery Comparison Site mySupermarket Launches U.S. Megastore For Finding Best Prices Across Amazon, Walmart, Target & More On the heels of reports that Amazon is preparing to significantly expand its online grocery service AmazonFresh, grocery comparison shopping site mySupermarket is today bringing its service the U.S. Operating something like a Kayak for grocery and drugstore products, the new U.S. version of mySupermarket lets shoppers find the best prices across top stores, including Amazon, Walmart, Target, Costco, Walgreens, Diapers.com, Soap.com, and Drugstore.com. mySupermarket was founded back in 2006, and now has offices in London, New York, Tel Aviv, and Tokyo. The company currently operates a U.K. version of the site which offers price comparisons across major European retailers including Tesco, Asda, Waitrose, Ocado, Sainsburys, Boots, Superdrug, Majestic and Virgin Wines. That business has 4 million monthly users, and sees average baskets of around $130. Today, the company is making that debut with the official launch of mySupermarket.com.

Pizza Express launch in-restaurant mobile payment system with PayPal : TameBay : eBay & ecommerce made easy PayPal announced a world first today, the ability to use PayPal via a smartphone to pay for pizza in restaurants. This is the first time that an online payment method has been made available in an entire chain of retail outlets across the whole country. Pizza Express have launched a new iPhone app that, amongst other things, gives customers the option to pay their bill automatically via their Smartphone. The new app also enables customers to find and book a restaurant table, view menus, and store special offer codes and receipts, all via the touch of their iPhone.

Design Seeds&: For All Who Love Color #d9e8c3 #ced181 #7c8f50 Augmented Reality App Instantly Translates Foreign Text On Signs, Menus If you ever wanted to be able to read text on a street sign or on a menu in a restaurant when abroad, your smartphone might be able to help you soon. Japanese electronics company Omron has developed a smartphone application that can instantly translate (short) foreign texts you come across – firing up the app and pointing the phone’s camera at the text in question is enough. Omron says that in its current form, the app (which isn’t available yet) can handle English, Japanese, Korean, and Chinese. Translations are superimposed over the text shown on the display (in the picture below, you can see three items on a Korean menu shown in yellow Japanese letters).

100 Websites You Should Know and Use In the spring of 2007, Julius Wiedemann, editor in charge at Taschen GmbH, gave a legendary TED University talk: an ultra-fast-moving ride through the “100 websites you should know and use.” Six years later, it remains one of the most viewed TED blog posts ever. Time for an update? We think so. Below, the 2013 edition of the 100 websites to put on your radar and in your browser. To see the original list, click here.

Farmigo: Tapping Into The Power Of The Web To Bring You Fresh Veggies It’s no secret that fresh produce straight from the farm can often beat the potato skins off of its supermarket counterpart — and why farmer’s markets are becoming increasingly popular. But unless you set aside that chunk of time every weekend to pick up your veggies from local growers, you’re probably stopping by your supermarket anyway. The solution to this has been the emergence of Community Supported Agriculture programs, where members of the community agree with farmers to purchase a certain amount of produce, and then pick that food up at local dropoff points at regular intervals. But, while they’ve been around for decades, these programs aren’t necessarily easy to find or use. If only we could use technology to make things a bit more efficient…

Win a Mentorship Lunch with Robert Scoble Do you ever wonder how rapidly changing technology will impact the world in the next 2, 5 or 50 years? Curious who are the most innovative new startup companies and learning how they came to see the light of day? Interested in building online communities and seeing how one grows a Twitter following to over 180,000 tweeps? Ever wonder what it would be like to interview tech leaders like Mark Zuckerburg? Today InternMatch is launching a life changing opportunity to meet with renowned video blogger and technology evangelist Robert Scoble.

Crowdtap Raises $7 Million To Help Brands Connect With Their Influential Customers Crowdtap, a service that allows marketers to easily collaborate with and mobilize targeted crowds of influential consumers, announced today that it has raised $7 million in series A funding. The round was led by Foundry Group, with participation from GSA Venture Partners and social media agency Mr. Youth. Mr. Youth invested $3 million of seed funding in Crowdtap back in 2009 (and served as an incubator for the company during its early stages), which brings the startup’s total current investment to $10 million.