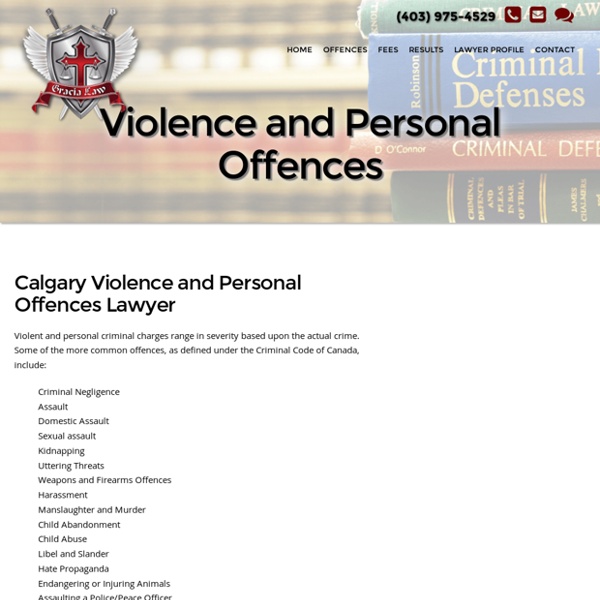 Violent and personal criminal charges range in severity based upon the actual crime. Some of the more common offences, as defined under the Criminal Code of Canada, include: Criminal NegligenceAssaultDomestic AssaultSexual assaultKidnappingUttering ThreatsWeapons and Firearms OffencesHarassmentManslaughter and MurderChild AbandonmentChild AbuseLibel and SlanderHate PropagandaEndangering or Injuring AnimalsAssaulting a Police/Peace OfficerTortureStalkingAccessory After the Fact In most cases, the accused either threatened to cause or actually caused harm to another psychologically or physically. It is important to note threats do not have to be made directly to the other person. Even in cases where threats are made to a third party, charges might still be brought against someone. Mr. Feel free to review the “Results” section of the website to learn more about the successful results Paul Gracia, violence and personal offences lawyer in Calgary has achieved for his clients.

Statutory and Regulatory Violations Statutory and regulatory violations are special types of offences where the accused has violated provincial laws. Most of these offences carry with them penalties in the form of fines. Offenders are normally issued a ticket for violating the act or regulation, like speeding or failing to stop at a red light. Jail time is only considered in cases where the charges are much more serious. Many statutory and regulatory violations are not recorded onto a person’s permanent criminal record, but some other less serious record, like violations of the Traffic Safety Act being recorded against a person’s driver’s license. Statutory and regulatory violations are defined by the Provincial Acts and Regulations of Alberta and include: Weapons charges - Calgary Criminal Defence Lawyer Having a weapons offence lawyer in Calgary represent you against weapons charges has a direct impact on obtaining positive results in your case. Paul Gracia has successfully represented clients facing all types of weapons offenses, from minor possession to more serious charges of using a weapon during the commission of another crime. Weapons offences are defined by the Criminal Code of Canada. A weapon is defined as any object or item which may be used in such a manner for intimidation or to threaten harm, injury and/or death of another person or physically inflict injury or cause the death of another person.

Sexual and indecent acts calgary defence lawyer Sexual and indecent acts offences are a unique classification of criminal offences as defined by the Criminal Code of Canada. These types of offences often involve some form or act of a sexual nature. Keep in mind, for some of these offences, there may not be any form of actual sexual activity, but mere the suggestion of it. Some of the more common sexual and indecent acts offences are: Property and Financial Crimes Criminal offences relating to property offences, theft, and financial crimes include white collar crimes, automobile theft, robbery, breaking and entering, cybercrimes, identity theft, arson, shoplifting, beaches of contract, money laundering, and other such crimes are defined under the Criminal Code of Canada. Penalties for such crimes could include fines, probation, imprisonment and travel restrictions. Being charged with one of these offences requires professional and experienced representation from a property and financial crimes lawyer in Calgary. Some property and financial crimes are considered minor cases, while others are much more serious.

Criminal Defence Lawyer Paul Gracia, B.Ed., M.Ed., J.D., Barrister and Solicitor, is a member in good standing with the Law Society of Alberta, and is an active member of various organizations, including the Calgary Criminal Defence Lawyers Association. Mr. Gracia graduated from Law School at the University of Calgary in 2005, was called to the Bar in 2006 and has been practicing criminal law steadily since then.

Impaired and Driving Offences The Criminal Code of Canada defines impaired and driving offences as those involving the use of a motorized vehicle, such as a car, truck, motorcycle, or semi-truck, during the commission of the offence. Some of the more common impaired and driving criminal offences one might be charged with include: Impaired DrivingDriving Over 0.80%Refusing to Provide a Breath SampleDriving on a Suspended LicenseImpaired or DUI Causing Bodily Harm and/or DeathStreet RacingDangerous/Reckless DrivingDangerous /Reckless Driving Causing Bodily Harm and/or DeathLeaving the Scene of an AccidentFailing to Stop at the Scene of an Accident It is important to distinguish impaired and driving offences from minor traffic violations and traffic accidents. In those cases, the investigating police officer may issue a traffic citation where the accused has the option to simply pay the ticket or fight the charges in traffic court.

Drug Offences Criminal Defence Lawyer Calgary Drug offences are defined under the Criminal Code of Canada and the Controlled Drugs and Substances Act. Drug offences not only involve illegal substances, but also prescription drugs. Some of the more common charges the Crown brings against a person include possession, drug distribution/ trafficking, possession of proceeds from criminal activities, possession for the purpose of distribution and trafficking, drug exportation and importation, and drug production. The following is a brief overview of certain drug offences and should not be viewed as legal advice.

FALL HOME MAINTENANCE CHECKLIST Diamond Valley Custom Homes – Custom Home Builders Calgary It would be amazing if all you needed to prep your custom home for fall was hang a wreath and light a bunch of pumpkin spice candles. While yes, those are a crucial part of getting ready for the change of seasons, there are more important (and not exactly fun) preparations that come with being a homeowner. Consider this everything you need to know before your house transitions from hot summer days to cool fall nights…and eventually freezing temperatures. 1. Clean your gutters and downspouts. Giving Your Lawn a Boost For the Fall Months - Juniper Landscape SD Posted by San Diego Landscaper on Wednesday, 7 September , 2016 It’s hard to believe but the fall months are just around the corner. In this entry, we’ll share tips for ways to keep you lawn healthy and looking good during throughout fall. Fall is a fantastic time for aerating your lawn.

5 Ultra-Chic Bathroom Design Trends in 2019 Hit the reset button on your bathroom this year with these trending design elements. From contemporary marble to statement art to modern barn doors, we take a look at what’s hot in 2019 for the modern lavatory. 1: Statement Art and Walls Bathrooms are often understated and simply designed. Considering how much time you spend in this small but important room (women spend an average of 39 minutes a day on hair and makeup alone—much of that time in the bathroom), why not add some character to the space? Framed posters and prints as well as eye-catching wallpaper patterns are in this year. Bring the Wow Factor Through Hardscaping Posted by San Diego Landscaper on Wednesday, 1 June , 2016 While you may not be familiar with the term hardscaping, when utilized effectively, it can really give your yard a powerful wow factor. Hardscaping at a Glance

5 Trending Kitchen Designs You Need to Know About in 2019 Whether you’re planning a full kitchen remodel this year or a more modest update, you need to know about the hottest trends of 2019. Overhauling the kitchen is a big investment, so you want the changes you make to retain their value and relevance for years to come. We’ve highlighted five kitchen trends for 2019 that are modern and fresh, but not so niche that they’ll be out of style in a year or two. 1: Interior Sliding Doors Sliding glass and wood doors have been trending for years, and their popularity remains strong—for good reason. Let Your Lawn Breath By Aerating It Posted by San Diego Landscaper on Wednesday, 30 March , 2016 We’re all familiar with the importance of fertilizing, mowing and watering our lawns. Another key component to keeping our lawns healthy and looking good is aerating. Just as with fertilizing and mowing, specific timing is needed for your lawn to reap its full benefits. Simply put, aeration is puncturing through the compacted soil in your lawn with small holes that will allow water, air and nutrients to reach the grass roots.