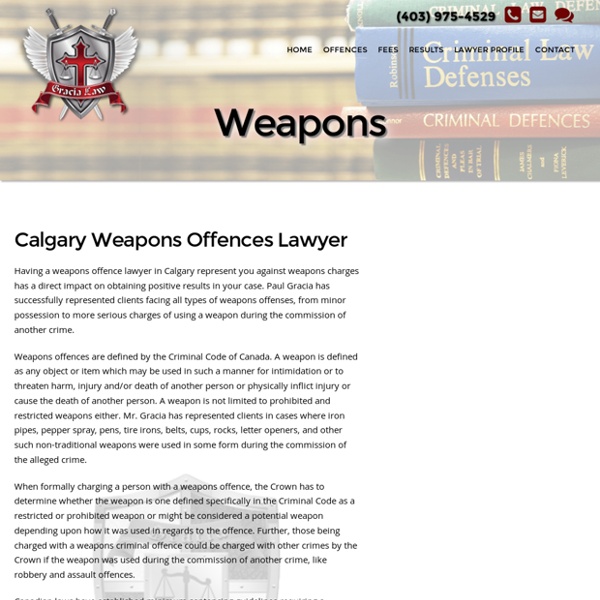 Having a weapons offence lawyer in Calgary represent you against weapons charges has a direct impact on obtaining positive results in your case. Paul Gracia has successfully represented clients facing all types of weapons offenses, from minor possession to more serious charges of using a weapon during the commission of another crime. Weapons offences are defined by the Criminal Code of Canada. A weapon is defined as any object or item which may be used in such a manner for intimidation or to threaten harm, injury and/or death of another person or physically inflict injury or cause the death of another person. A weapon is not limited to prohibited and restricted weapons either. Mr. When formally charging a person with a weapons offence, the Crown has to determine whether the weapon is one defined specifically in the Criminal Code as a restricted or prohibited weapon or might be considered a potential weapon depending upon how it was used in regards to the offence.

Violence and Domestic Violence criminal defence lawyer calgary Violent and personal criminal charges range in severity based upon the actual crime. Some of the more common offences, as defined under the Criminal Code of Canada, include: Criminal NegligenceAssaultDomestic AssaultSexual assaultKidnappingUttering ThreatsWeapons and Firearms OffencesHarassmentManslaughter and MurderChild AbandonmentChild AbuseLibel and SlanderHate PropagandaEndangering or Injuring AnimalsAssaulting a Police/Peace OfficerTortureStalkingAccessory After the Fact In most cases, the accused either threatened to cause or actually caused harm to another psychologically or physically. It is important to note threats do not have to be made directly to the other person. Even in cases where threats are made to a third party, charges might still be brought against someone.

Sexual and indecent acts calgary defence lawyer Sexual and indecent acts offences are a unique classification of criminal offences as defined by the Criminal Code of Canada. These types of offences often involve some form or act of a sexual nature. Keep in mind, for some of these offences, there may not be any form of actual sexual activity, but mere the suggestion of it. Some of the more common sexual and indecent acts offences are: Property and Financial Crimes Criminal offences relating to property offences, theft, and financial crimes include white collar crimes, automobile theft, robbery, breaking and entering, cybercrimes, identity theft, arson, shoplifting, beaches of contract, money laundering, and other such crimes are defined under the Criminal Code of Canada. Penalties for such crimes could include fines, probation, imprisonment and travel restrictions. Being charged with one of these offences requires professional and experienced representation from a property and financial crimes lawyer in Calgary. Some property and financial crimes are considered minor cases, while others are much more serious.

Criminal Defence Lawyer Paul Gracia, B.Ed., M.Ed., J.D., Barrister and Solicitor, is a member in good standing with the Law Society of Alberta, and is an active member of various organizations, including the Calgary Criminal Defence Lawyers Association. Mr. Gracia graduated from Law School at the University of Calgary in 2005, was called to the Bar in 2006 and has been practicing criminal law steadily since then.

Impaired and Driving Offences The Criminal Code of Canada defines impaired and driving offences as those involving the use of a motorized vehicle, such as a car, truck, motorcycle, or semi-truck, during the commission of the offence. Some of the more common impaired and driving criminal offences one might be charged with include: Impaired DrivingDriving Over 0.80%Refusing to Provide a Breath SampleDriving on a Suspended LicenseImpaired or DUI Causing Bodily Harm and/or DeathStreet RacingDangerous/Reckless DrivingDangerous /Reckless Driving Causing Bodily Harm and/or DeathLeaving the Scene of an AccidentFailing to Stop at the Scene of an Accident It is important to distinguish impaired and driving offences from minor traffic violations and traffic accidents. In those cases, the investigating police officer may issue a traffic citation where the accused has the option to simply pay the ticket or fight the charges in traffic court.

Drug Offences Criminal Defence Lawyer Calgary Drug offences are defined under the Criminal Code of Canada and the Controlled Drugs and Substances Act. Drug offences not only involve illegal substances, but also prescription drugs. Some of the more common charges the Crown brings against a person include possession, drug distribution/ trafficking, possession of proceeds from criminal activities, possession for the purpose of distribution and trafficking, drug exportation and importation, and drug production. The following is a brief overview of certain drug offences and should not be viewed as legal advice.

FALL HOME MAINTENANCE CHECKLIST Diamond Valley Custom Homes – Custom Home Builders Calgary It would be amazing if all you needed to prep your custom home for fall was hang a wreath and light a bunch of pumpkin spice candles. While yes, those are a crucial part of getting ready for the change of seasons, there are more important (and not exactly fun) preparations that come with being a homeowner. Consider this everything you need to know before your house transitions from hot summer days to cool fall nights…and eventually freezing temperatures. 1. Clean your gutters and downspouts.