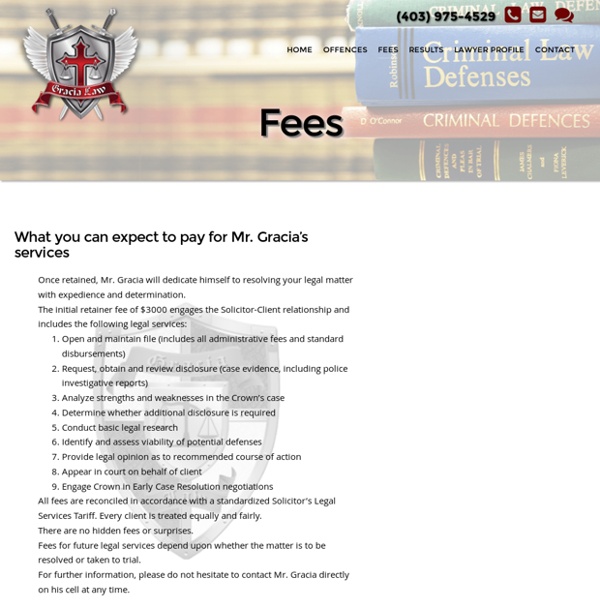 Violence and Domestic Violence criminal defence lawyer calgary Violent and personal criminal charges range in severity based upon the actual crime. Some of the more common offences, as defined under the Criminal Code of Canada, include: Criminal NegligenceAssaultDomestic AssaultSexual assaultKidnappingUttering ThreatsWeapons and Firearms OffencesHarassmentManslaughter and MurderChild AbandonmentChild AbuseLibel and SlanderHate PropagandaEndangering or Injuring AnimalsAssaulting a Police/Peace OfficerTortureStalkingAccessory After the Fact In most cases, the accused either threatened to cause or actually caused harm to another psychologically or physically.

Statutory and Regulatory Violations Statutory and regulatory violations are special types of offences where the accused has violated provincial laws. Most of these offences carry with them penalties in the form of fines. Offenders are normally issued a ticket for violating the act or regulation, like speeding or failing to stop at a red light. Jail time is only considered in cases where the charges are much more serious. Sexual and indecent acts calgary defence lawyer Sexual and indecent acts offences are a unique classification of criminal offences as defined by the Criminal Code of Canada. These types of offences often involve some form or act of a sexual nature. Keep in mind, for some of these offences, there may not be any form of actual sexual activity, but mere the suggestion of it. Some of the more common sexual and indecent acts offences are: Prostitution Offences: Communicating for the purpose of or living off the avails of prostitution.Child Pornography Offenses: Possessing, making, accessing or distributing child pornography.Under Age Offences: Sexual touching or sexual interference of a person under age 16.Sexual ExploitationNudityInternet Luringv Indecent ExhibitionIndecent ActsInterfering with a Dead BodySexual Assault Offences: Sexual assault, sexual assault with a weapon, sexual assault causing bodily harm, and aggravated sexual assault. Indecent Telephone CallsProcuring for Illicit Sexual Purposes

Criminal Defence Lawyer Paul Gracia, B.Ed., M.Ed., J.D., Barrister and Solicitor, is a member in good standing with the Law Society of Alberta, and is an active member of various organizations, including the Calgary Criminal Defence Lawyers Association. Mr. Gracia graduated from Law School at the University of Calgary in 2005, was called to the Bar in 2006 and has been practicing criminal law steadily since then. Unlike most lawyers, who practice in various areas of law, Mr. Gracia practices exclusively in the area of criminal law.

Property and Financial Crimes Criminal offences relating to property offences, theft, and financial crimes include white collar crimes, automobile theft, robbery, breaking and entering, cybercrimes, identity theft, arson, shoplifting, beaches of contract, money laundering, and other such crimes are defined under the Criminal Code of Canada. Penalties for such crimes could include fines, probation, imprisonment and travel restrictions. Being charged with one of these offences requires professional and experienced representation from a property and financial crimes lawyer in Calgary. Some property and financial crimes are considered minor cases, while others are much more serious. Regardless of the actual criminal offence, it is important to treat the charge as serious, no matter whether you were charged with shoplifting or robbery. Mr.

FALL HOME MAINTENANCE CHECKLIST Diamond Valley Custom Homes – Custom Home Builders Calgary It would be amazing if all you needed to prep your custom home for fall was hang a wreath and light a bunch of pumpkin spice candles. While yes, those are a crucial part of getting ready for the change of seasons, there are more important (and not exactly fun) preparations that come with being a homeowner. Consider this everything you need to know before your house transitions from hot summer days to cool fall nights…and eventually freezing temperatures. Drug Offences Criminal Defence Lawyer Calgary Drug offences are defined under the Criminal Code of Canada and the Controlled Drugs and Substances Act. Drug offences not only involve illegal substances, but also prescription drugs. Some of the more common charges the Crown brings against a person include possession, drug distribution/ trafficking, possession of proceeds from criminal activities, possession for the purpose of distribution and trafficking, drug exportation and importation, and drug production. The following is a brief overview of certain drug offences and should not be viewed as legal advice. Drug Possession: Being found in possession with a controlled substance in a small quantity viewed by the law as for personal use, not trafficking and distribution. Drug Distribution/Trafficking: Distributing controlled substances to other individuals for their own person usage or to other individuals, who distribute the drugs on your behalf.

Giving Your Lawn a Boost For the Fall Months - Juniper Landscape SD Posted by San Diego Landscaper on Wednesday, 7 September , 2016 It’s hard to believe but the fall months are just around the corner. In this entry, we’ll share tips for ways to keep you lawn healthy and looking good during throughout fall. Fall is a fantastic time for aerating your lawn. If you let the spring slip by without aerating your lawn, fall is the perfect opportunity to get it done. Remember, the main reason for aerating is to loosen up the soil and keep it from compacting.

5 Ultra-Chic Bathroom Design Trends in 2019 Hit the reset button on your bathroom this year with these trending design elements. From contemporary marble to statement art to modern barn doors, we take a look at what’s hot in 2019 for the modern lavatory. 1: Statement Art and Walls Bathrooms are often understated and simply designed.