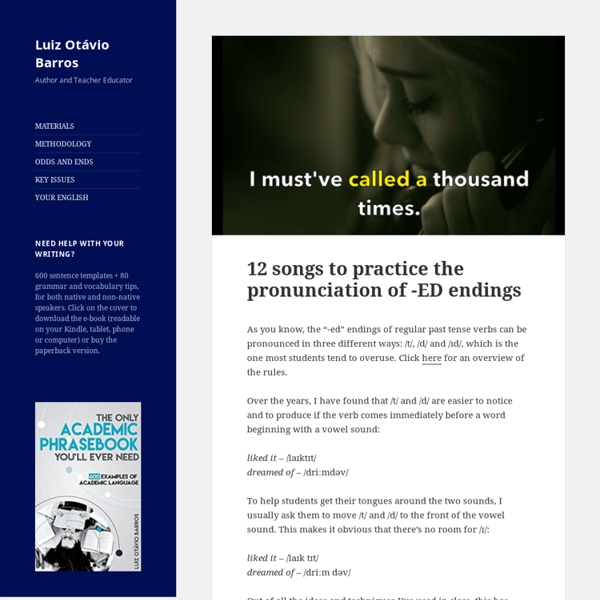 As you know, the “-ed” endings of regular past tense verbs can be pronounced in three different ways: /t/, /d/ and /ɪd/, which is the one most students tend to overuse. Click here for an overview of the rules. Over the years, I have found that /t/ and /d/ are easier to notice and to produce if the verb comes immediately before a word beginning with a vowel sound: liked it – /laɪktɪt/dreamed of – /driːmdəv/ To help students get their tongues around the two sounds, I usually ask them to move /t/ and /d/ to the front of the vowel sound. This makes it obvious that there’s no room for /ɪ/: liked it – /laɪk tɪt/dreamed of – /driːm dəv/ Out of all the ideas and techniques I’ve used in class, this has probably been the most effective. So I decided to put together a 7-minute video containing 12 song excerpts you can use to help your students notice how /t/ and /d/ are linked to the vowel sounds that follow. By the way, if the video is out of synch, go back to the beginning and / or refresh the page.

Katherine Bilsborough: A simple idea - The Weekend Game A simple Idea For me, the best classroom activities are usually the most simple, requiring little or no preparation time and few or no materials. They are activities that can be adapted to use effectively with groups of different sizes, levels or ages and they can be used again and again even with the same students. The Weekend Game Le bulletin météo – The Rich Morning Show - Vidéo Pratiquez l'anglais avec les vidéos The Rich Morning Show. Découvrez aujourd'hui le rapport météo présenté par Pavel le phoque. Titre original : The weather report – The Rich Morning Show How to Improve Your English Pronunciation to Talk Like a Native “What?” “Can you say that again?” How many times do you hear this when you’re speaking? 10 BEST PAST SIMPLE AND PAST CONTINUOUS GAMES, SONGS AND VIDEOS!!! I searched the web and gathered the best games, songs and videos in one post. If you find it useful share it with other teachers!!! I made this game a few months ago. My students really enjoyed playing it. There are two variants of the game Team vs Team or Students vs Teacher. Both are fun!!!

british-airways-inflight-video-thandie-newton-gillian-anderson-chiwetel-ejiofor-ian-mckellen-a7849361 There must be stardust in the air. A week after Air New Zealand launched its latest inflight safety video – which swiftly went viral, clocking up 16 million views on YouTube – British Airways has released its star-studded equivalent. The six-minute film runs through the safety instructions for BA flights, as well as introducing their Flying Start charity, which supports Comic Relief. 33 ways to speak better English If you’re reading this, I imagine you want to speak better English and communicate in a more confident and competent way. When we communicate effectively we are able to express our ideas and opinions, share experiences, and build relationships with others. When we struggle to express ourselves, we feel unvalued and insecure.

Fun and Simple: Adjective Order If you have following me for a while, then you know how much I love stepping aside from the course book and surprising students with activities that might add a spark to my classes. Things like flip cards or wheels of fortune are constant guests in my classes. But for this activity, I have decided to invite an old friend I haven’t used for some time. Don’t ask me why. I still love him very much.

Delta Publishing Our aim is to help you with resources that you can use online. We hope these prove useful and engaging for your students. Please feel free to share these with your colleagues too. How to These notes are a general guide on how to use the DELTA slides online with your students Intonation – Simple Conversation in Different Voices – The Canswedian English Teacher Right now, I am enrolled in an English Grammar course at a Swedish university. Teacher’s license in Sweden = more English. Go figure… There is this one professor that pre-records all the lessons so we can listen to them before the seminar. fluentu Is it hard to find time to read books in English? Or if you do read sometimes, do you ever wish you could hear someone saying the sentences aloud while you read? It would help your English pronunciation so much—and your listening! Well guess what? You can have a native English speaker read books to you whenever and wherever you want! How?

Simple Present Tense – Mr. Bean Goes to the Pool – The Canswedian English Tea... My family grew up watching Mr. Bean. I believe my brother’s Grade 3 teacher even phoned my parents once to ask them if they could tell my brother to stop doing Mr. Bean impressions during class. Little did I know how great he would be for teaching English later on in life. Chapter One: 'The Boy Who Lived' DanielDaniel Radcliffe reads the first chapter of Harry Potter and the Philosopher’s Stone/Sorcerer’s Stone, as part of Harry Potter At Home. Look out for more special video readings in the upcoming weeks. Daniel will be the first of many exciting contributors to help us read through the first Harry Potter book, as he introduces the Dursleys, who don’t like anything mysterious. Enter a cat reading a map, owl-filled skies and whispers about the Potters. So, get comfy and enjoy!

18 English words that mean very different things in Britain and America As the old adage famously goes: you say tom-MAY-toes, and I say tom-MAH-toes. We should probably call the whole thing off, right? Ever since the might of the British Empire was expelled from the United States, ordinary folk from both sides of the pond have chuckled at each other's use of the English language and pronunciation. Here are several important examples you need to remember - simply to make sure no one gives you a weird look when you're off on your holidays.