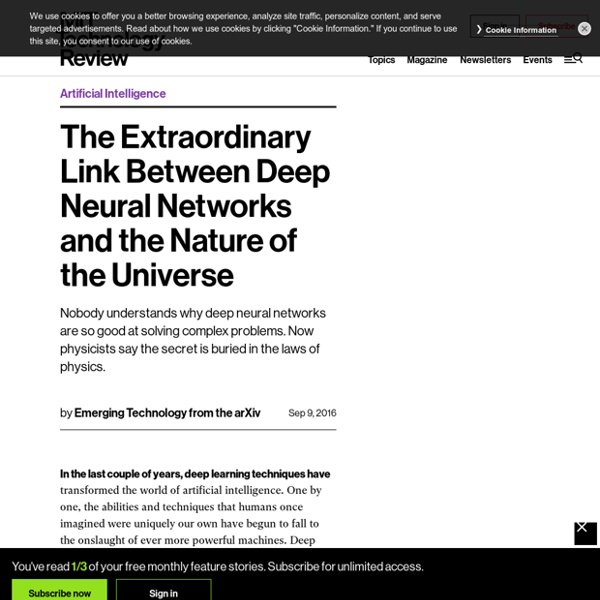 In the last couple of years, deep learning techniques have transformed the world of artificial intelligence. One by one, the abilities and techniques that humans once imagined were uniquely our own have begun to fall to the onslaught of ever more powerful machines. Deep neural networks are now better than humans at tasks such as face recognition and object recognition. They’ve mastered the ancient game of Go and thrashed the best human players. But there is a problem. Today that changes thanks to the work of Henry Lin at Harvard University and Max Tegmark at MIT. First, let’s set up the problem using the example of classifying a megabit grayscale image to determine whether it shows a cat or a dog. Such an image consists of a million pixels that can each take one of 256 grayscale values. In the language of mathematics, neural networks work by approximating complex mathematical functions with simpler ones. Now Lin and Tegmark say they’ve worked out why. Related:  Science! • ArtificialIntelligence

Is sparkling water bad for you? 2 things you probably didn't know For many people, the start of a year is a time for new health resolutions —be it eat more vegetables, consume less sugar, or drink more water. Keeping hydrated is essential for body functions such as temperature regulation, transporting nutrients, and removing waste. Water even acts as a lubricant and shock absorber for joints. But while most people know they should drink more water, it can be a bit boring. So what about sparkling water as an option to liven things up a bit? Fizzy fluids Sparkling water is made by infusing water with carbon dioxide. The outer layer of our teeth, dental enamel, is the hardest tissue in the body. There is normally a balance between tooth minerals and the minerals in saliva. 1. This demineralization creates tiny pores in the tooth mineral and the enamel starts to dissolve. If teeth are bathed in acid from carbonated drinks frequently, more minerals can be dissolved out than get put back in, and there is more risk of tooth wear or erosion 2.

Paul Allen: The Singularity Isn't Near Futurists like Vernor Vinge and Ray Kurzweil have argued that the world is rapidly approaching a tipping point, where the accelerating pace of smarter and smarter machines will soon outrun all human capabilities. They call this tipping point the singularity, because they believe it is impossible to predict how the human future might unfold after this point. Once these machines exist, Kurzweil and Vinge claim, they’ll possess a superhuman intelligence that is so incomprehensible to us that we cannot even rationally guess how our life experiences would be altered. Vinge asks us to ponder the role of humans in a world where machines are as much smarter than us as we are smarter than our pet dogs and cats. Kurzweil, who is a bit more optimistic, envisions a future in which developments in medical nanotechnology will allow us to download a copy of our individual brains into these superhuman machines, leave our bodies behind, and, in a sense, live forever. The Complexity Brake The AI Approach

Machines That Learn Language More Like Kids Do Children learn language by observing their environment, listening to the people around them, and connecting the dots between what they see and hear. Among other things, this helps children establish their language’s word order, such as where subjects and verbs fall in a sentence. In computing, learning language is the task of syntactic and semantic parsers. These systems are trained on sentences annotated by humans that describe the structure and meaning behind words. Parsers are becoming increasingly important for web searches, natural-language database querying, and voice-recognition systems such as Alexa and Siri. But gathering the annotation data can be time-consuming and difficult for less common languages. This “weakly supervised” approach — meaning it requires limited training data — mimics how children can observe the world around them and learn language, without anyone providing direct context. Visual learner The new parser is the first to be trained using video, Ross says.

Scientists discovered a weed compound that may be 30 times more powerful than THC Whether the new cannabinoid, named tetrahydrocannabiphorol, or THCP, will deliver 30 times the high of THC — or any high at all — is unclear. Italian scientists also discovered a second previously unknown compound they named CBDP. It appears to be a cousin of CBD, the medicinal compound known for its anti-inflammatory, antioxidant and anticonvulsant activity. The discoveries were recently published in the journal Nature, Scientific Reports. The compounds were isolated and identified from the Italian medical cannabis variety known as FM2 using mass spectrometry and metabolomics, processes used to find the basic chemicals of a sample or molecule. The authors assessed the ability of THCP to bind to human cannabinoid receptors found in the endocannabinoid system by sending the compound to a lab to be tested in a tube. The endocannabinoid system's job is to keep our body in homeostasis, or equilibrium, and it regulates everything from sleep to appetite to inflammation to pain and more.

Flavor Networks Reveal Universal Principle Behind Successful Recipes Given the number of ingredients that humans eat, the total number of ways to combine them is on the order of 10 to the 15th power. And yet the actual number of recipes we eat is around one million—a small fraction of the total. That strongly suggests an organizing principle that, in recipe terms, sorts the wheat from the chaff. So an ongoing challenge for food scientists is to discover laws that govern flavor combinations and use them to create new recipes yet to be experienced by human taste buds. Today, Tiago Simas at Telefonica Research in Barcelona, Spain, and a few pals say they have discovered an important principle of flavor combination by studying foods of different cultures. The background to this group’s discovery is the hypothesis of food pairing developed by the chefs Francois Benzi and Heston Blumenthal. That’s why at certain high-end restaurants, you’ll sometimes find blue cheese and chocolate in the same dishes. Enter Simas and his colleagues.

Human and Artificial Intelligence May Be Equally Impossible to Understand Dmitry Malioutov can’t say much about what he built. As a research scientist at IBM, Malioutov spends part of his time building machine learning systems that solve difficult problems faced by IBM’s corporate clients. One such program was meant for a large insurance corporation. It was a challenging assignment, requiring a sophisticated algorithm. When it came time to describe the results to his client, though, there was a wrinkle. “We couldn’t explain the model to them because they didn’t have the training in machine learning.” In fact, it may not have helped even if they were machine learning experts. As exciting as their performance gains have been, though, there’s a troubling fact about modern neural networks: Nobody knows quite how they work. Take, for example, an episode recently reported by machine learning researcher Rich Caruana and his colleagues. The neural networks were right more often than any of the other methods. Also in Artificial Intelligence Robots Can’t Dance Aaron M.