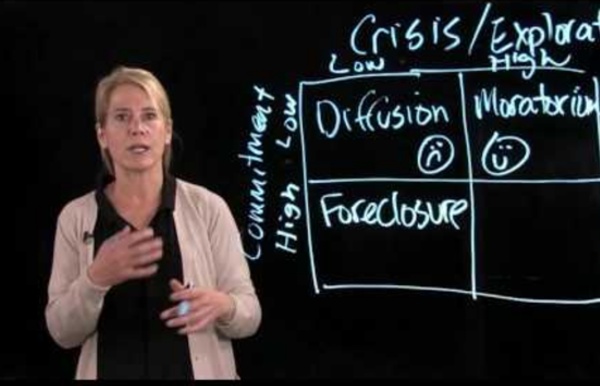 Understanding the Three Stages of Adolescence - HealthPark Pediatrics While entering the teenage years may be intimidating for both you and your child, understanding the ups and downs of each stage can better prepare you to deal with any challenges. Each child is different, but you can generally expect the following changes during the three stages of adolescence as outlined by the American Academy of Pediatrics. Each stage is separated into lists of both physical and mental/emotional changes. Ages 10 to 13: Early Adolescence Physical Growth & Development Adolescent Identity Development: What to Expect in Teens Adolescent Identity Development: The Factors of Change Among the profound and exciting changes taking place in adolescence is the process of self-discovery. Our teens are working to figure out who they are, making adolescent identity development a central feature of teen life.

Erik Erikson's Stages of Psychosocial Development Erik Erikson was an ego psychologist who developed one of the most popular and influential theories of development. While his theory was impacted by psychoanalyst Sigmund Freud's work, Erikson's theory centered on psychosocial development rather than psychosexual development. The stages that make up his theory are as follows:1 Let's take a closer look at the background and different stages that make up Erikson's psychosocial theory. Overview Read: Your Teen's Search for Identity Their bodies kick into overdrive. They find themselves disoriented, scared and alone. They become moody, secretive and sarcastic. You don’t recognize your own child.

6.3 Adolescence: Developing Independence and Identity – Introduction to Psychology Learning Objectives Summarize the physical and cognitive changes that occur for boys and girls during adolescence.Explain how adolescents develop a sense of morality and of self-identity. Adolescence is defined as the years between the onset of puberty and the beginning of adulthood. In the past, when people were likely to marry in their early 20s or younger, this period might have lasted only 10 years or less—starting roughly between ages 12 and 13 and ending by age 20, at which time the child got a job or went to work on the family farm, married, and started his or her own family. Today, children mature more slowly, move away from home at later ages, and maintain ties with their parents longer. For instance, children may go away to college but still receive financial support from parents, and they may come home on weekends or even to live for extended time periods.

Erikson’s 8 Stages of Psychosocial Development Erik Erikson (1902–1994) was a stage theorist who took Freud’s controversial theory of psychosexual development and modified it as a psychosocial theory. Erikson emphasized that the ego makes positive contributions to development by mastering attitudes, ideas, and skills at each stage of development. This mastery helps children grow into successful, contributing members of society. Read: How Adolescents Search for Identity - iMom Menu Search Close Share what kind of mom you are! Get to know other mom types! Identity Formation in Adolescence by Rachel Sumner, PhD Cornell University www.actforyouth.net/adolescence/identity/ (Note: This page is formatted for screen readers. See the PDF for an alternate format/handout.) "Be yourself.

Read: Six Ways to Build Your Teen's Identity - Focus on the Family Marriages and families are in trouble after the challenges of last year. If it's not too much to ask, would you help equip these families with the resources they need to put Jesus at the center of their home? Yes, I will help struggling families! Español Helping Families Thrive™ DONATEStrengthen families withyour gift Development of identity in religious domain The need to develop a strong religious identity has concerned clergy and educators for many years. However, how religious identity development occurs has seldom been analyzed or used to guide educators' efforts to promote identity development in their students. This discussion delves into the framework of identity development as described by Marcia in 1966 Marcia , J. E. ( 1966 ).