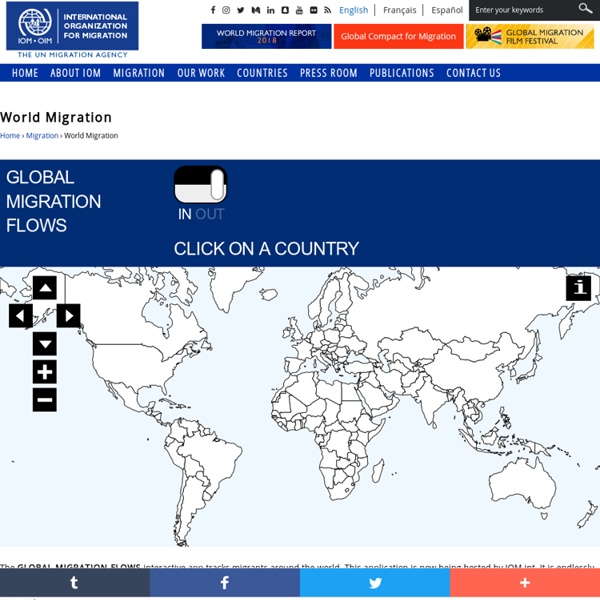 The GLOBAL MIGRATION FLOWS interactive app tracks migrants around the world. This application is now being hosted by IOM.int. It is endlessly fascinating to explore where we're from. The underlying data for the map was published by the UN DESA in 2015. Using the app: Choose whether you want to access information about migrants leaving a country (Outward) or migrants entering a country (Inward). Then click on a country and watch the pattern of migration to or from the chosen country. This migration visualization tool is being developed by Locus Insight in collaboration with IOM. Note re web browser requirements: To view the migration app you will require a modern web browser. Sources: United Nations, Department of Economic and Social Affairs (2015).

European Migration: 08/09/2015, Behind the News We're taking you to Europe where right now more than a hundred thousand asylum seekers are arriving each month. Here's Emma to take a closer look at this issue and some of the kids that are caught up in it. EMMA DAVIS, REPORTER: This sight is becoming very common in a lot of European countries. Tens of thousands of asylum seekers, travelling across borders, desperate for a new home. 15-year old Jehad is one of them.

SVT Pejl These figures are for 2014 and show people that, according to the United Nations refugee agency (UNHCR), were granted refugee status that year or earlier. The numbers also include people in refugee-like situations. Three of the origin categories may require some additional notes. The term "stateless" refers to people not considered members of any state, e.g. a person whose country of origin has ceased to exist, or a person whose papers are not considered valid by their country of origin.

Here's Everyone Who's Immigrated to the U.S. Since 1820 From 1820 to 2013, 79 million people obtained lawful permanent resident status in the United States. The interactive map below visualizes all of them based on their prior country of residence. The brightness of a country corresponds to its total migration to the U.S. at the given time. Boats full of dead people from North Korea keep showing up in Japan — here's why A wooden boat which drifted ashore with eight partially skeletal bodies at Oga, Japan in late November. Kyodo via Reuters Dozens of ships containing dead bodies have washed up in Japan recently. All the evidence indicates that the "ghost ships" are coming from North Korea.

CRITICAL ANALYSIS OF W.H AUDEN'S 'REFUGEE BLUES’ Put in simple terms, this is a poem about the plight of a specific group of refugees displaced and arriving in a country that is generally hostile to their situation, even if well-meaning. Written in 1939, Auden focuses on the German Jews arriving in the UK at that time, though the poem has taken in a timeless quality due to the commonality of its subject. Indeed, it is not until stanza 8 that Auden identifies his Refugees. Possibly he is trying to show the reluctance of the persecuted to identify themselves for fear of further persecution, possibly he is allowing the narrator –we assume a husband – to present the key ideas of his poem without the idea of Jewishness in some way getting in the way of a universal message. He has chosen the title Refugee Blues to link to the protest and subculture of the enslaved Blacks, who developed this musical form in the Southern USA, and has written a poem in which the rhythm and rhyme scheme (AAB) reflects the musical style. Jonathan Peel SGS 2012

Brexit: What's happening to migration? Image copyright Getty Images Is something rather profound starting to happen to migration to and from the UK? Are we now seeing a Brexit effect in who wants to come, stay, or leave the country? First off, the headline. Net migration is estimated to have fallen by nearly a third to 230,000 in the year to June. That's 106,000 down on the year before the referendum - and it's the biggest decline since records began in 1964.

Origins and Destinations of the World’s Migrants, from 1990-2013 Select any country Please select a country on the map In 2013, people born in were living in other countries