How to read and understand a scientific paper: a guide for non-scientists – Violent metaphors 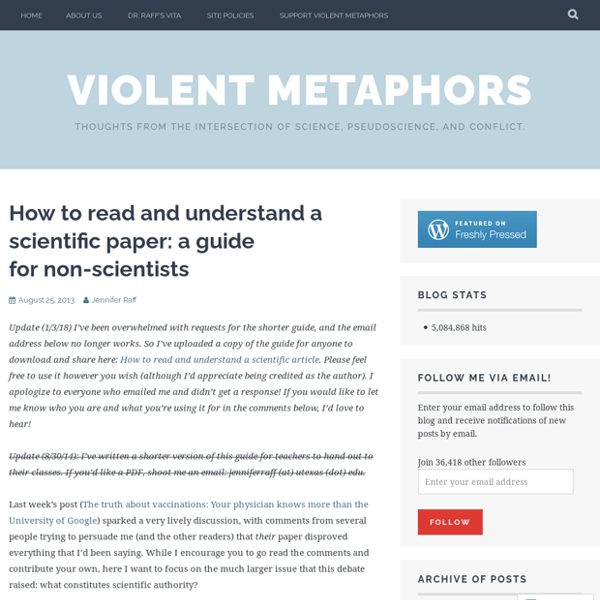 Update (1/3/18) I’ve been overwhelmed with requests for the shorter guide, and the email address below no longer works. So I’ve uploaded a copy of the guide for anyone to download and share here: How to read and understand a scientific article. Please feel free to use it however you wish (although I’d appreciate being credited as the author). I apologize to everyone who emailed me and didn’t get a response! If you would like to let me know who you are and what you’re using it for in the comments below, I’d love to hear! Update (8/30/14): I’ve written a shorter version of this guide for teachers to hand out to their classes. Last week’s post (The truth about vaccinations: Your physician knows more than the University of Google) sparked a very lively discussion, with comments from several people trying to persuade me (and the other readers) that their paper disproved everything that I’d been saying. It’s not just a fun academic problem. “Be skeptical. What constitutes enough proof? 1. 2.

Ultimate Guide to Taking Notes in Class By Sharla|source:Urbanest.comAug 28th, 2016 You may already be excellent at taking notes, but have a look at these techniques and you might get even better. Of course, if you're like me with notes, you couldn't possibly get any worse. The very first step to taking good notes is to have good handwriting, a bus I missed a long time ago. My typing is, unsurprisingly, much more legible, but unfortunately, research says that handwritten notes are better retained and therefore more effective. Whether you use the outline method, the Cornell method, mapping, your own special system or a total hodgepodge, reviewing your notes within a day of taking them will help you remember immensely.

Replication Effort Provokes Praise—And 'Bullying' Charges After a string of scandals involving accusations of misconduct and retracted papers, social psychology is engaged in intense self-examination—and the process is turning out to be painful. This week, a global network of nearly 100 researchers unveiled the results of an effort to replicate 27 well-known studies in the field. In more than half of the cases, the result was a partial or complete failure. As the replicators see it, the failed do-overs are a healthy corrective. “Replication helps us make sure what we think is true really is true,” says Brent Donnellan, a psychologist at Michigan State University in East Lansing who has undertaken three recent replications of studies from other groups—all of which came out negative. “We are moving forward as a science,” he says.

How Corporations and the Wealthy Avoid Taxes (and How to Stop Them) By Gabriel Zucman A professor of economics at the University of California, Berkeley and author of “The Hidden Wealth of Nations.” The United States loses, according to my estimates, close to $70 billion a year in tax revenue due to the shifting of corporate profits to tax havens. That’s close to 20 percent of the corporate tax revenue that is collected each year. This is legal. Sun Tzu If you know your enemies and know yourself, you will not be imperiled in a hundred battles... if you do not know your enemies nor yourself, you will be imperiled in every single battle. Sun Tzu 孫子; Sūn Zǐ; (c. 6th century BCE) was a Chinese general, military strategist, and author of The Art of War, an immensely influential ancient Chinese book on military strategy; also known as Sun Wu (孫武; Sūn Wǔ), and Chang Qing (長卿; Cháng Qīng). The Art of War[edit] Quotations from translations of the book The Art of War (6th century BC)

How to Do Research in 7 Simple Steps It’s 2 am, and you’re on your fifth cup of coffee (or was it your sixth?). You’re crouched at a table in some dark corner of the library surrounded by fifteen open books. Equally as many tabs are open on your laptop, and you still haven’t written a word of the paper that’s due in 7 hours. How Real-Life Science Influenced Guardians of the Galaxy Marvel Studios Of all the people who are partially responsible for Friday’s much-anticipated Marvel movie Guardians of the Galaxy—studio head Kevin Feige, co-stars Chris Pratt and Zoe Saldana, Jack Kirby and Jim Starlin for pioneering Marvel’s “cosmic” stories—the most surprising one might be scientist Richard Feynman. Not that the celebrated physicist known for his work in the fields of quantum mechanics and nanotechnology contributed directly to the movie in any way (having died in 1988, that would’ve been unlikely), but without Feynman, GotG screenwriter Nicole Perlman might never have gotten involved in writing in the first place. “Science was my gateway drug,” Perlman says, “so I tried to see if I could apply my interest in science stories to actual science—and discovered that the nitty gritty is a lot less exciting than the stories.” Nicole Perlman. Ben Rasmussen/WIRED

7 Most Efficient Note Taking Methods Whether you are going back to college or have decided to take learning into your own hands, note-taking is a skill that is truly unique. On the surface, it can seem like jotting down the important points or stating everything word for word. But delving into the world of note-taking begins a realization that there is more to it than that. So if you feel like your note skills are rusty, or if you didn’t care much about note-taking, here are some note taking methods to help you prepare and succeed in this area.

What Scientists Really Do by Priyamvada Natarajan Curiosity: How Science Became Interested in Everything by Philip Ball University of Chicago Press, 465 pp., $35.00 A basic income really could end poverty forever I first heard the term “basic income” in the socialist magazine Dissent in 2005. I was a 15-year-old leftist with a taste for weird, radical plans to restructure society: say, having the government buy up majority stakes in every company and then distribute them equally to every American; converting all companies into worker cooperatives; trying a planned economy where the planning is done by decentralized worker and consumer councils rather than a government bureaucracy. Basic income, wherein the government gives everyone enough cash to live on with no strings attached, struck me as an idea in that mold: another never-going-to-happen but fun-to-think-about alternative to the unfettered financial capitalism of the second Bush term. Boy was that wrong. In a little over a decade, basic income has gone from an idea about as fringe as #FullCommunism to something that could be benefiting 1.2 billion people imminently.

How to Take Better Notes: The 6 Best Note-Taking Systems Heading off to college is kind of like leveling up in a video game. In high school, the tests and courses were smaller bosses that you could take down with low-level equipment. Now that you’re in college, you’re going to need to upgrade some of those items you’re taking with you if you want to succeed. This is a whole new adventure, my dude.