National Center for Science Education - Defending the Teaching of Evolution in Public Schools. 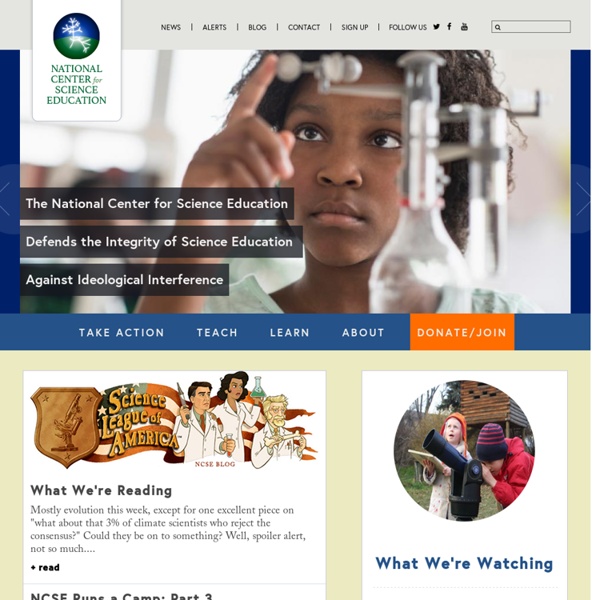 ERS Charles Darwin and other early evolutionists were fascinated by religious phenomena and how they might be explained from an evolutionary perspective. Nevertheless, evolutionary theory became restricted to the biological sciences and excluded from the study of many human-related subjects for most of the 20th century. Only now is the theory being used to explain all aspects of humanity in addition to the rest of life. The new field of evolutionary religious studies is part of this larger trend.

The National Academies In the News: Your Inner Fish – A Scientific Adventure Have you ever wondered why people look the way they do? Why our hands and feet have five digits instead of six? Why we stand on two legs instead of four? It took 350 million years of evolution to produce the amazing machine we call the human body and in Your Inner Fish, a three-part series based on the best-selling book of the same name, author and evolutionary biologist Dr. Peppered Moth Simulation Name:______________________________________________ Objective: Simulate changes in moth population due to pollution and predation, and observe how species can change over time. Introduction: Charles Darwin accumulated a tremendous collection of facts to support the theory of evolution by natural selection. One of his difficulties in demonstrating the theory, however, was the lack of an example of evolution over a short period of time, which could be observed as it was taking place in nature.

s BioInteractive - Evolution Series Where and when did humans arise? What distinguishes us from other species? Did our distant ancestors look and behave like us? Interactive Science Notebooks Those of you that follow know that I am just crazy about interactive science notebooks. I especially like the use of 3-d graphic organizers or foldables to help students demonstrate their learning in a creative and meaningful way. First I teach an inquiry based lesson, such as a learning cycle. Portland State Sociology of Islam & Muslim Societies The Sociology of Islam and Muslim Societies Newsletter: Winter 2011 Newsletter No. 7 - ISSN:1942-7948 Contents Social and Political Transformations in the Middle East - Umit Kurt and Oguz Alyanak The Political Economy of Turkey’s Response to the Arab Spring - Altay Atli Footsteps of Revolution in the Land of Queen Sheba - Bezen Balamir Coskun Two Sides of the Same Coin; Conflicting Views of Islamism in Pakistan - Jeanette Bailey Egypt and the "Arab Spring": Notes on Facts and Challenges - Moises Garduño García The Arab Spring and the Turkish Model - Alper Y.

Edwards v. Aguillard [This is the text of the 1987 United States Supreme Court decision striking down a Louisiana law that required if evolution is taught in public schools then creationism must also be taught. This 7-2 decision ended any prospect of public schools in the United States being legally forced to teach explicate creationism. One consequence of this case was that some antievolutionists choose to use the term "intelligent design" instead of "creationism."] The Supreme Court affirmed the judgment of the court of appeals, which in turn had affirmed the District Court's decision finding the Louisiana act unconstitutional. The decision had Brennan, Marshall, Blackmun, Powell, Stevens, O'Connor, and White on the majority, with Scalia and Rehnquist dissenting. Held Opinion Majority Opinion by Brennan I, II, III (A)(B), IV, V Concurring Opinion by Powell I (A), (B), II, III Concurring Opinion by White Dissenting Opinion by Scalia I, II, (A) (B), III

A suggested project-based evolution unit for high school: teaching content through application In Search of..... - TV.com www.tv.com/shows/in-search-of Narrarated by Leonard Nimoy, In search of was a 30 minute syndicated show that covered a wide range of paranormal topics. It pioneered a lot of the methodology that ... Search Engine - Download.com download.cnet.com/s/search-engine Evolution Here then is the beta version of my strip about evolution. This is a chapter of the book Science Stories which will be out from Myriad Editions next spring. I'm sure there'll be mistakes here, so do feel free to point them out, so that I can make the necessary changes. Thank you. Note Oct 2013.