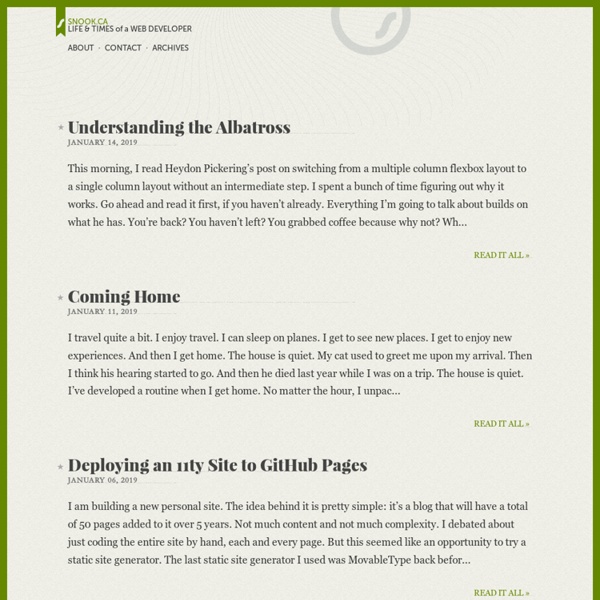 GrooveShark Search with CSS3 I am a huge fan of the Grooveshark interface. Every time I look at the site I start to dissect the UI and turn it into code in my head. I wanted to see if I could create the search box only using HTML and CSS. Sadly there is one image and it’s the search icon in the button. I recently read a tutorial that shows you how to create a custom font and use the font-face property for icons, but they didn’t have the search icon I needed.

John Nack on Adobe February 07, 2014 I’ve Got My Ticket For the Long Way ‘Round… From discovering Adobe my first week in college & sending away $10 for an ATM Light floppy disk, to teaching Photoshop in college & starting a Web design career, to joining the company itself in 2000, I’ve had a very special relationship with this place. It has enabled & enlivened my creativity on so many levels, from making beautiful images & animations to learning how to develop great products. Our little sons were just asking the meaning of BIFURC8 (“Bifurcate”), as seen on our license plate. I explained that it’s about splitting into two pieces.

7 awesome browser features New APIs for the web seem to be released every week. It would be cool to be able to use them, but if you need to make sites for the average user, you won’t be able to implement them for years – right? Wrong. How to Use the Sticky Footer HTML & CSS Code Be sure to read the Known Issues at the bottom of this page. It will help prevent a lot of mistakes that can take hours to debug. Introduction Islands of Consciousness - Code/Visualization: Mario Klingemann - Soundtrack: Oleg Marakov / Corpuscul Islands Of ConsciousnessCode/Visualization: Mario Klingemann | Soundtrack: Oleg Marakov / Corpuscul When Oleg Marakov pointed out the similarities between his piece of randomly arranged music Islands and my random movie creator Flickeur it was immediately clear that a combination of both projects would definitely result in something very interesting. The result of this fusion - Islands of Consciousness - is not a simple combination of the two concepts but a great advancement. Sound and Images enter a very close relationship in which the randomly arranged musical phrases are taking direct influence on the visual outcome. So when you look at this piece keep in mind that all the visuals are assembled in realtime using photos downloaded from Flickr.com. All the transitions and effects are entirely random and only happening on you screen.

Wonderful Machine Photography Blog Wonderful Machine More Are you a photographer? FOLLOW BY EMAILBlog Jeffrey Totaro // Architect MagazineOct 3, 2017Tear Sheets Check out today's featured tear sheet! A Baseline for Front-End Developers 12 Apr 2012 edit I wrote a README the other day for a project that I'm hoping other developers will look at and learn from, and as I was writing it, I realized that it was the sort of thing that might have intimidated the hell out of me a couple of years ago, what with its casual mentions of Node, npm, Homebrew, git, tests, and development and production builds. Once upon a time, editing files, testing them locally (as best as we could, anyway), and then FTPing them to the server was the essential workflow of a front-end dev.

HTML5 For Web Designers Sells Out The first printing of Jeremy Keith’s HTML5 For Web Designers has sold out. For a book about web forms, semantics, and the history of markup, it’s done pretty well: The book sold 1,000 copies during the first hour of pre-sales.It sold 5,000 copies during the first 24 hours of pre-sales.The first printing sold out within two months. Haven’t ordered yours yet, and now they’re sold out? The 10 Most Important Skills You Need to be a Web Designer Here are my top 10 web design skills that you WILL need to master to become an effective web designer. If you’re serious about mastering web design and marketing, check out the Pro Web Design Alliance. See how Jordan benefited from the course forum and Google hangout sessions to make his and his clients’ sites better. Look at Jordan’s site and theÂ testimonialsÂ from his clients here. Â The personal interaction with Ben and fellow students while Â working on live sites makes the learn by doing course philosophy start generating money for you while you are still in the course. Your priorities may be different (and my priorities may be different a few months down the line).

An InDesign for HTML and CSS? – Jeffrey Zeldman Presents The Dai In “CSS is the new Photoshop” (?), Adobe’s John Nack correctly observes, as have many of us, that “Cascading Style Sheets can create a great deal of artwork now, without reliance on bitmap graphics.” Nack quotes Shawn Blanc, one of several concurrent authors of the phrase “CSS is the new Photoshop,” who cites as evidence Louis Harboe’s iOS icons and Jeff Batterton’s iPhone, both designed entirely in CSS and both only viewable in the latest Webkit browsers, Safari 5 and Google Chrome 5. He’s not alone: Håkon Wium Lie from Opera predicts that CSS3 could eliminate half the images used on the Web.

Bibliography Books The Elements of Typographic Style by Robert Bringhurst The book which sparked this website. Best Web Development Trends For 2017! - Usersnap Technology changes constantly, so to be at the top of your game as a web developer, it’s vital you’re keeping up. It can be confusing and discerning when so many updates and developments are being released every few weeks. With 2017 just getting started, we’ve put together some information about the anticipated trends for this upcoming year and some advice about what areas of development you should be focusing on. Discussing new frameworks, techniques, and tools which are all working to enhance UX, consider this blog your one-stop-shop for all things 2017! We at Usersnap put together all our thoughts in this article. If you like this article, give it some sharing