5 Reasons Why Trump Will Win 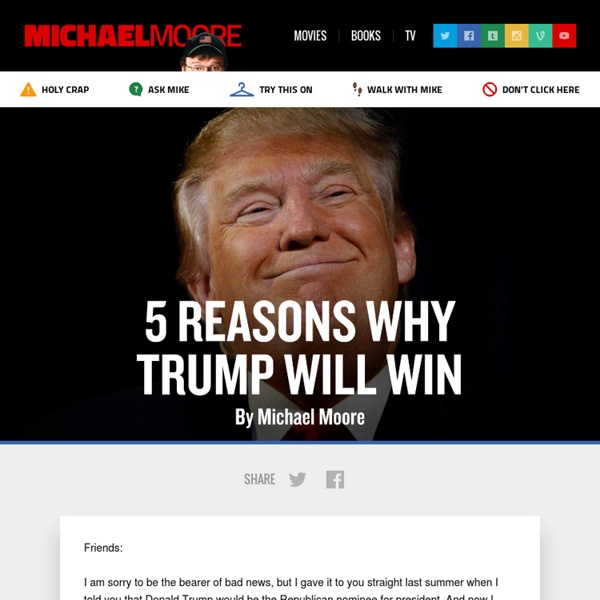 Friends: I am sorry to be the bearer of bad news, but I gave it to you straight last summer when I told you that Donald Trump would be the Republican nominee for president. And now I have even more awful, depressing news for you: Donald J. Trump is going to win in November. This wretched, ignorant, dangerous part-time clown and full time sociopath is going to be our next president. President Trump. Never in my life have I wanted to be proven wrong more than I do right now. I can see what you’re doing right now. You need to exit that bubble right now. Well, folks, this isn’t an accident. Don’t get me wrong. But that is not how it works in America. Here are the 5 reasons Trump is going to win: Midwest Math, or Welcome to Our Rust Belt Brexit. Coming back to the hotel after appearing on Bill Maher’s Republican Convention special this week on HBO, a man stopped me. (Next week I will post my thoughts on Trump’s Achilles Heel and how I think he can be beat.) ALSO: Yours, Michael Moore

The Election of Trump and the Struggle Ahead 1. The election of Donald Trump as president of the United States is a shocking and dangerous turn of events--not only for the U.S., but for the entire world. It is a decisive shift, representing the latest failure of center-right and center-left parties in the advanced capitalist countries in the wake of the Great Recession, opening the way for the triumph of a candidate who used right-wing populism to stoke racism, xenophobia and reaction.

Microdiscectomy Spine Surgery: Risks, Complications, and Success Rates A widely performed surgery, microdiscectomy is considered to have relatively high rates of success, especially in relieving patients’ leg pain (sciatica). Patients are usually able to return to a normal level of activity fairly quickly. See Sciatica Symptoms After a microdiscectomy procedure, an exercise program is recommended to prevent disc herniation from reoccurring. See Rehabilitation After Spine Surgery Prisoner's dilemma A payoff matrix of the standard dilemma of cooperation and defection The prisoner's dilemma is a standard example of a game analyzed in game theory that shows why two completely "rational" individuals might not cooperate, even if it appears that it is in their best interests to do so. It was originally framed by Merrill Flood and Melvin Dresher working at RAND in 1950. Albert W.

US Election 2016: Trump and Clinton win big in Arizona Image copyright Getty Images US presidential front-runners, Democrat Hillary Clinton and Republican Donald Trump, have continued their winning streaks, taking Arizona. The issue of immigration loomed large in the south-western state, the biggest prize in the latest round of contests. Polls showed that Mr Trump's anti-immigration message resonated with the state's conservative voters.

What Republicans Really Think About Tump Photo CLEVELAND — The arena here at the Republican National Convention echoes with applause for Donald Trump, but the cacophony and extravagant stage effects can’t conceal the chaos in the G.O.P. and in the Trump campaign. Republican senators suddenly are busy fishing, mowing the lawn or hiking the Grand Canyon; conservative celebrities mostly sent regrets. This vacuum reflects the horror that many leading conservatives feel for their new nominee. Pundits like me are gnashing our teeth as Trump receives the presidential nomination of the party of Lincoln, but, frankly speaking, we don’t have much credibility in Cleveland since many of us aren’t all that likely to support a Republican nominee in any case. So instead of again inflicting on you my views of the danger of Trump, let me share what some influential conservatives said about him during the course of the campaign.

IBM is ending its decades-old remote work policy — Quartz Less than a year into her tenure as IBM’s chief marketing officer, Michelle Peluso prepared to make an announcement that she knew would excite some of her 5,500 new employees, but also, inevitably, inspire resignation notices from others. She had already briefed managers and the leaders of small teams on the news, which had been set in motion before her arrival in September. The rumor mill had already informed most other employees. All that was left to do was to make it official. “It’s time for Act II: WINNING!”

Trump’s victory spells trouble but also exciting, unimagined opportunities A Donald Trump presidency is as unpredictable as it was unexpected. While some have welcomed the result, for many Americans, as for America’s friends and allies, there is a deep sense of unease about the future. Yet, strange as it may sound, the outcome of this election may depend more on what we make of it than on what Trump and his advisers intend. Though daunting, the challenge is pregnant with possibilities. Help nerve pain 1 week post lumbar discectomy - Back Problems Message Board My guess would be that you are attempting too much too soon. I have found that it takes relatively little activity to cause inflammation when you are so early in recovery. Once it starts, it can be difficult to control. It is very easy to aggravate nerves in the lower lumbar, sacral area.

Gowers's Weblog For several reasons, I am instinctively in favour — strongly so — of remaining in the EU: I have a French wife and two bilingual children, and I am an academic living in the age of the internet. The result is that my whole outlook is international, and leaving the EU would feel to me like a gigantic step in the wrong direction. But in this post I want to try to set those instincts aside and try to go back to first principles, which doesn’t make it a mathematical post, but does make it somewhat mathematical in spirit. That is why I have chosen as my title the mathematical symbol for “is a member of”, which can also be read (in some contexts) as “in”, and which conveniently looks like an E for Europe too.

Donald Trump Cannot Be President of the United States It's easy to make fun of the hats. It's not so easy to contemplate what makes so many people think America's greatness is in desperate need of reformation, or what would make them turn to someone like Donald Trump to make it a reality. America has flaws as deep as its founding, when the men who laid down basic principles of human rights – principles that have endured 240 years – were fed and clothed by human beings they owned. That paradox still defines the fault lines of our nation, and it's along those lines we are drawing the ugliest election in modern history. It isn't just economic anxiety or trade deals or the opioid epidemic driving the mostly white, mostly male movement behind Trump's campaign.

Microdiscectomy Surgery Video: A Spine Surgeon Explains the Procedure skip ad Video presented by Robert J. Henderson, MD Video Transcript Donald Trump: Fearmonger in Chief As human beings, our capacity to forget is astonishing, second only to our capacity to believe just about anything. So in 2016, we find ourselves in a place we never thought we'd be in this century: Witnessing, and in many cases supporting, the rise of leaders proposing such things as restricting freedoms of specific groups of people, sending political opponents to prison, employing crueler methods of torture, killing families for an individual's crimes, cracking down on the press and scapegoating entire ethnicities. And unfortunately, it's not just Donald Trump, who at last night's debate refused to accept the legitimacy of the sitting President, the FBI, the election process, and, as moderator Chris Wallace put it, "the peaceful transition of power" in this country. Around the Western world, the Great Panic of 2016 is very real and very ugly, with various increasingly popular politicians and parties espousing nationalist policies that threaten democratic freedoms and human rights.

Man-Computer Symbiosis Man-Computer Symbiosis J. C. R. 4 key times presidential nominees failed to gain Senate confirmation Republicans are rushing to begin confirmation hearings for Cabinet appointments even before the FBI has finished its background checks. For President-elect Donald Trump’s opponents, this makes uncovering flaws in his nominees all the more challenging. As a scholar of U.S. history, I have studied the many cases in which presidential nominees, particularly judges, have failed to gain Senate confirmation. However, according to the Senate Historical Office, there were four cases since 1970 in which a Senate controlled by the president’s party did not confirm the president’s nominees. In each case, the failed nominee had either ethical, financial or legal lapses in their records.