Free for All: NYPL Enhances Public Domain Collections For Sharing and Reuse 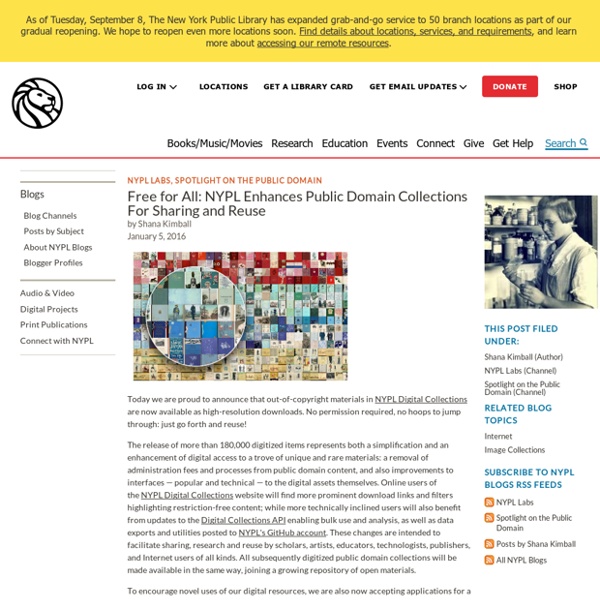 Today we are proud to announce that out-of-copyright materials in NYPL Digital Collections are now available as high-resolution downloads. No permission required, no hoops to jump through: just go forth and reuse! The release of more than 180,000 digitized items represents both a simplification and an enhancement of digital access to a trove of unique and rare materials: a removal of administration fees and processes from public domain content, and also improvements to interfaces — popular and technical — to the digital assets themselves. Online users of the NYPL Digital Collections website will find more prominent download links and filters highlighting restriction-free content; while more technically inclined users will also benefit from updates to the Digital Collections API enabling bulk use and analysis, as well as data exports and utilities posted to NYPL's GitHub account. We've made it easier than ever to search, browse, and download public domain items in Digital Collections.

Alte Nationalgalerie, Staatliche Museen zu Berlin, Allemagne The Alte Nationalgalerie is the original home of the Nationalgalerie, whose collections today are divided between the Neue Nationalgalerie, the Hamburger Bahnhof – Museum für Gegenwart – Berlin, the Friedrichswerdersche Kirche, Museum Berggruen and the Sammlung Scharf-Gerstenberg. The idea of establishing a cultural and educational centre across from the Berlin Palace dates back to the time of Friedrich Wilhelm IV, who dreamt of creating a "sanctuary for art and science" on the site. The basic architectural concept for the Alte Nationalgalerie – a temple-like building raised on a plinth decorated with motifs from antiquity – came from the king himself. The building was designed by Friedrich August Stüler, a student of Schinkel who also designed the Neues Museum. It was completed after Stüler’s death by another of Schinkel’s students, Johann Heinrich Strack.

2,200 Radical Political Posters Digitized: A New Archive I recently heard someone say his college-bound nephew asked him, "What's a union?" Whether you love unions, loathe them, or remain indifferent, the fact that an ostensibly educated young person might have such a significant gap in their knowledge should cause concern. A historic labor conflict, after all, provided the occasion for Ronald Reagan to prove his bona fides to the new conservative movement that swept him into power. His crushing of the Professional Air Traffic Controllers Organization (PATCO) in 1981 set the tone for the ensuing 30 years or so of economic policy, with the labor movement fighting an uphill battle all the way.

Download Influential Avant-Garde Magazines from the Early 20th Century: Dadaism, Surrealism, Futurism & More “I’m tired of politics, I just want to talk about my art,” I sometimes hear artists—and musicians, actors, writers, etc.—say. And I sometimes see their fans say, “you should shut up about politics and just talk about your art.”

Museo Reina Sofia, Madrid, Espagne Founded in 1990 after originally being created as an art centre, Museo Reina Sofía is among the culminating events of the Spanish transition to democracy, recovering Pablo Picasso's Guernica as well as an outstanding representation of the international avant-gardes and neo-avant-gardes. In short, the founding of this museum means the recuperation of the experience of modernity previously missing from the Spanish context and the opportunity to try out new models of narration from a periphery that is neither lateral nor derivative, but is rather an entry way for new stories, historiographic models and artistic episodes that tip the balance of the orthodox canon of the main museums. The institution no longer considers its task to be simply the transmission of culture. Instead, it works with other agents and institutions, creating networks and alliances that strengthen the public sphere and position Museo Reina Sofía as a reference of prime importance in the geopolitical South.

32,000+ Bauhaus Art Objects Made Available Online by Harvard Museum Website You may have first encountered the word Bauhaus as the name of a campy, arty post-punk band that influenced goth music and fashion. But you'll also know that the band took its name from an even more influential art movement begun in Germany in 1919 by Walter Gropius. The appropriation makes sense; like the band, Bauhaus artists often leaned toward camp---see, for example, their costume parties---and despite their serious commitment, had a sense of humor about their endeavor to radically alter European art and design. But the Bauhaus movement has been unfairly pegged at times as overly serious: cold technologists and proponents of faceless glass and steel buildings and austere modernist furniture. That impression only tells a part of the tale. When we speak of Bauhaus design, we often forget that the Bauhaus was also—and first principally—an art school.

Reading Room The Reading Room is a special corner of lacma.org dedicated to catalogues and brochures of exhibitions past. These are out-of-print, hard-to-find publications available here in full for free. From a unique set of publications focused on the Southern California art scene to rare books about German Expressionism, modern art, Southeast Asian art, and more, the catalogues and brochures here reflect the depth and breadth of LACMA’s collection and exhibition history. We continue to add new publications on an ongoing basis. Ilene Susan Fort Richard Brettell, Scott Schaefer, et al. AIRPANO : Visitez l'une des sept merveilles du monde (Vidéos en 360°) Guilin is one of the most interesting cities in China. It is famous for its wonderful natural monuments and situated on the bank of Lijiang river in the Southern Guangxi Zhuang Autonomous Region. Guilin's beauty inspired people to give very poetic names to some of the local places of interest, such as Seven Stars Park, Reed Flute Cave, Folded Brocade Hill, and Green Lotus Peak.

Attention K-Mart Shoppers : Free Audio : Download & Streaming This is a digitized version of an in-store cassette tape that was played within a Kmart store. See the title of the file for the month and year. I worked at Kmart between 1989 and 1999 and held onto them with the hopes that they would be of use some day. Enjoy!