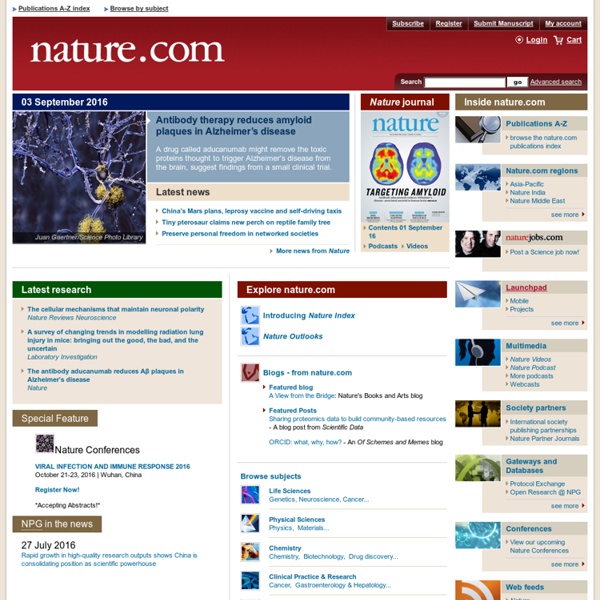 Antibody's unusual abilities might inspire vaccine strategies The antibody shows promise both for stopping E. coli from adhering to cells and for dislodging it E. coli bacteria showing the appendages used to adhere to other cells. For example, certain forms of E. coli can attached to human cells in the urinary tract to cause infection. Credit: Sokurenko lab/University of Washington The recent discovery of a novel antibody that works in an unusual way might inspire ideas for designing more effective vaccines. Among the common pathogens that could be targeted are urinary-tract infecting strains of E. coli.

Chemistry Education Research and Practice Bill Byers, University of Ulster, UK Melanie Cooper, Michigan State University, US Iztok Devetak, University of Ljubljana, Slovenia Black Widow Spiders, Black Widow Spider Pictures, Black Widow Spider Facts Black widows are notorious spiders identified by the colored, hourglass-shaped mark on their abdomens. Several species answer to the name, and they are found in temperate regions around the world. This spider's bite is much feared because its venom is reported to be 15 times stronger than a rattlesnake's. In humans, bites produce muscle aches, nausea, and a paralysis of the diaphragm that can make breathing difficult; however, contrary to popular belief, most people who are bitten suffer no serious damage—let alone death.

Revealing kidney cancer's secret Tumors gain survival advantage by reprogramming their metabolism An international team of scientists, led by UC Davis nephrologist Robert Weiss, have used a sophisticated combination of proteomics and metabolomics to show how renal cell carcinoma (RCC) reprograms its metabolism and evades the immune system. In addition, the study found that cancer grade has a major impact on this reprogramming. School of Mathematics and Physics Pictures above: (1) Longtime custodian of the famous experiment, the late Professor John Mainstone. (2) Three webcams trained on the experiment 24/7. (3) The Pitch Drop Experiment. (4) Close up of the pitch drop. About the Pitch Drop Experiment While the School of Mathematics and Physics at The University of Queensland has an international reputation for cutting-edge research and innovative teaching in the disciplines of Mathematics, Physics and Statistics, it is also home to the famous Pitch Drop Experiment. The experiment is listed in the Guinness Book of World Records as the world's longest-running laboratory experiment. The first Professor of Physics at UQ, Professor Thomas Parnell, began an experiment in 1927 to illustrate that everyday materials can exhibit quite surprising properties.

An Error Occurred Setting Your User Cookie This site uses cookies to improve performance. If your browser does not accept cookies, you cannot view this site. Setting Your Browser to Accept Cookies There are many reasons why a cookie could not be set correctly. Below are the most common reasons: You have cookies disabled in your browser. Why Black Widow Spider Venom Is So Potent The painful bites and lethal venom of black widow spiders have evolved rapidly over the years, according to a new study that also found common house spiders produce similar toxic compounds. The difference is that female black widows produce ample amounts of highly potent venom to the point that these spiders are even crafting stronger webs to handle ever-bigger prey. The findings were presented at the 2015 annual conference of the Society of Integrative and Comparative Biology in West Palm Beach, Fla.

Researchers provide further insight into male bias of autism A 2:1 or 3:1 male to female autism spectrum disorder prevalence bias is frequently reported in studies. The series is published in Molecular Autism and explores structural differences in the brain, the role of prenatal sex hormones and a theory referred to as the "female protective effect." "Autism has always been perceived as a condition that occurs more often in males, which means that females are usually underrepresented in research studies," explains guest editor Meng-Chuan Lai from the University of Cambridge, UK. "This means there's a risk that the scientific and clinical literature provides a partial, male-based understanding of autism." It is clear, however, that autism spectrum disorder (ASD) is not simply a male condition.

Improbable Research - Longest Running Experiments by Marc Abrahams We are happy to report that three of the world’s longest-running scientific experiments are indeed still running. It has been a number of years since anyone checked on all three. Cancer cells 'disguise themselves as immune cells' to spread via lymphatic system, study finds The study shows how cancer cells take on the guise of immune cells to gain entry to the lymphatic system. Writing in the journal Oncogene, cancer researchers and immunologists led by the Karolinska Institutet in Stockholm, Sweden, describe how they found cancer cells "disguise themselves" as white blood cells to gain entry to the lymphatic system. The team suggests the discovery should help develop new drugs to prevent or reduce cancer spread through the lymphatic system. Metastasis - where cancer spreads to other parts of the body - is the major cause of death from cancer. Cells break off from the primary tumor and travel through the body to set up secondary tumors in vital organs such as the lungs or the liver.

Milgram's Obedience Experiments By Kendra Cherry Updated December 16, 2015. If a person in a position of authority ordered you to deliver a 400-volt electrical shock to another person, would you follow orders? Most people would answer this question with an adamant no, but Yale University psychologist Stanley Milgram conducted a series of obedience experiments during the 1960s that led to some surprising results. Časopis Pedagogika ISSN 0031-3815 (Print), ISSN 2336-2189 (Online) Special Monothematic Issue: Historical reflection of education and its significance in (not only) teacher education Editors: Andreas Hoffmann, Tomáš Kasper, Karel Rýdl History of Education was considered one of the core educational disciplines and as such used to constitute firm part of teacher education in the period of development of educational science as a scientific discipline as well as in the first half of the 20th century.

I don't see why "mainstream science" should be something negative. In my opinion, the more mainstream science gets, the better. Science is not something a few "intelligent" people should know about just to make themselves feel better than others. Rather it should be an isntrument for everyone to understand and make the better of the world we share. by hannesforsstrom Feb 6

Fortunately, I Pearled this for myself and I am personally quite satisfied with it. I found these articles interesting. I think it is important that bits of science are shared with the general public. Filling the gaps in communication is the most effective way to advance and empower people to make better decisions. by jessyelaine Feb 4

ouch! there are some good articles in it, you cant deny that by notyetsonic Feb 2