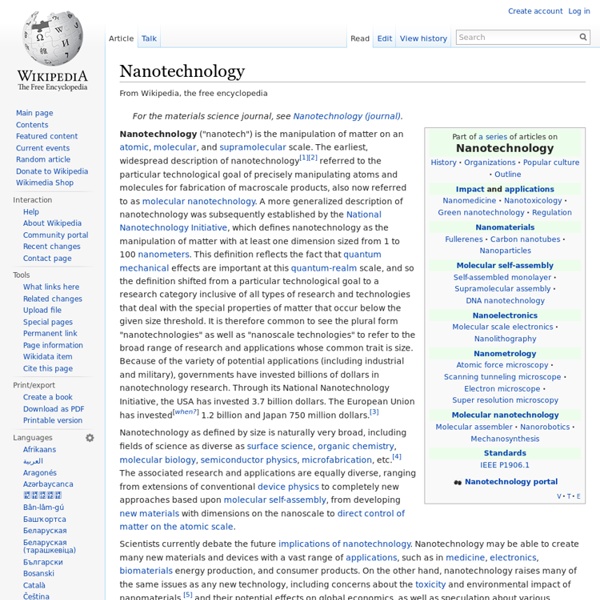 Nanotechnology ("nanotech") is the manipulation of matter on an atomic, molecular, and supramolecular scale. The earliest, widespread description of nanotechnology[1][2] referred to the particular technological goal of precisely manipulating atoms and molecules for fabrication of macroscale products, also now referred to as molecular nanotechnology. A more generalized description of nanotechnology was subsequently established by the National Nanotechnology Initiative, which defines nanotechnology as the manipulation of matter with at least one dimension sized from 1 to 100 nanometers. This definition reflects the fact that quantum mechanical effects are important at this quantum-realm scale, and so the definition shifted from a particular technological goal to a research category inclusive of all types of research and technologies that deal with the special properties of matter that occur below the given size threshold. Origins[edit] Comparison of Nanomaterials Sizes

Robotics Robotics is the branch of mechanical engineering, electrical engineering and computer science that deals with the design, construction, operation, and application of robots,[1] as well as computer systems for their control, sensory feedback, and information processing. These technologies deal with automated machines that can take the place of humans in dangerous environments or manufacturing processes, or resemble humans in appearance, behavior, and/or cognition. Many of today's robots are inspired by nature contributing to the field of bio-inspired robotics. The concept of creating machines that can operate autonomously dates back to classical times, but research into the functionality and potential uses of robots did not grow substantially until the 20th century.[2] Throughout history, robotics has been often seen to mimic human behavior, and often manage tasks in a similar fashion. Etymology[edit]

Understanding Nanomedicine: An Infographic Nanomedicine is a field of medical science that involves the use of objects and substances at the molecular level. Basically, it is the application of nanotechnology to medicine. Currently, nanomedicine is used for nanoparticle drug delivery where medicine is delivered to a specific area of the body through a nanosized container or vessel. Molecular nanotechnology (MNT) and nanovaccinology are also some of the potential future application for this field of science.

Biotechnology "Bioscience" redirects here. For the scientific journal, see BioScience. For life sciences generally, see life science. Biotechnology is the use of living systems and organisms to develop or make products, or "any technological application that uses biological systems, living organisms or derivatives thereof, to make or modify products or processes for specific use" (UN Convention on Biological Diversity, Art. 2).[1] Depending on the tools and applications, it often overlaps with the (related) fields of bioengineering, biomedical engineering, etc. For thousands of years, humankind has used biotechnology in agriculture, food production, and medicine.[2] The term is largely believed to have been coined in 1919 by Hungarian engineer Károly Ereky. In the late 20th and early 21st century, biotechnology has expanded to include new and diverse sciences such as genomics, recombinant gene techniques, applied immunology, and development of pharmaceutical therapies and diagnostic tests.[2]

Easy and effective therapy to restore sight: Engineered virus will improve gene therapy for blinding eye diseases Researchers at UC Berkeley have developed an easier and more effective method for inserting genes into eye cells that could greatly expand gene therapy to help restore sight to patients with blinding diseases ranging from inherited defects like retinitis pigmentosa to degenerative illnesses of old age, such as macular degeneration. Unlike current treatments, the new procedure is quick and surgically non-invasive, and it delivers normal genes to hard-to-reach cells throughout the entire retina. Over the last six years, several groups have successfully treated people with a rare inherited eye disease by injecting a virus with a normal gene directly into the retina of an eye with a defective gene. Despite the invasive process, the virus with the normal gene was not capable of reaching all the retinal cells that needed fixing.

SAFE WORK AUSTRALIA This section of the website gives you access to all of the Safe Work Australia publications. Publications can searched for using keywords or alternatively can be viewed by document type, industry, topic and date published. To view or download these documents you will need Adobe Acrobat Reader software installed on your computer. If you are unable to locate a publication or you require an alternative format please email info@safeworkaustralia.gov.au or call 1300 551 832. Quick links Life extension The sale of putative anti-aging products such as nutrition, physical fitness, skin care, hormone replacements, vitamins, supplements and herbs is a lucrative global industry, with the US market generating about $50 billion of revenue each year.[2] Some medical experts state that the use of such products has not been proven to affect the aging process, and many claims of anti-aging medicine advocates have been roundly criticized by medical experts, including the American Medical Association.[2][3][4][5][6] Public opinion[edit] Life extension is a controversial topic due to fear of overpopulation and possible effects on society.[10] Religious people are no more likely to oppose life extension than the unaffiliated,[11] though some variation exists between religious denominations. A Spring 2013 Pew Research poll in the United States found that 38% of Americans would want life extension treatments, and 56% would reject it. Average and maximum lifespans[edit]

Futures studies Moore's law is an example of futures studies; it is a statistical collection of past and present trends with the goal of accurately extrapolating future trends. Futures studies (also called futurology and futurism) is the study of postulating possible, probable, and preferable futures and the worldviews and myths that underlie them. There is a debate as to whether this discipline is an art or science. In general, it can be considered as a branch of the social sciences and parallel to the field of history. In the same way that history studies the past, futures studies considers the future. Futures studies (colloquially called "futures" by many of the field's practitioners) seeks to understand what is likely to continue and what could plausibly change.

Tiny brains created from SKIN could lead to cures for disorders like schizophrenia and autism Scientists used stem cells to grow 3D tissue that mimics a brainThe cells displayed an organisation similar to that seen in the early stages of the developing human brain's cerebral cortex - also known as grey matterThe miniature brains helped the researchers identify a defect that affects normal brain development in microcephaly leading to a smaller brainThe findings could eventually lead to treatments for other neurological disorders By Emma Innes Published: 18:19 GMT, 28 August 2013 | Updated: 00:00 GMT, 29 August 2013 A ‘brain in a bottle’ has been grown by stem cell scientists who hope it will lead to treatments for neurological and mental diseases. The ‘organoids’, three to four millimetres across, have a structure similar to that of an immature human brain.

Long Term Implantable Bio-Sensors Developed Using Carbon Nanotubes Using carbon nanotubes, scientists have developed a biosensor that can be implanted under the skin that will last more than a year. They have also developed a short term biosensor that can travel through the blood stream flowing through the different organs of the body without causing damage. In order to get a reading and collect data from the sensors, a laser that produces near-infrared light is used to detect the fluorescent signal off of the nanotube based devices. The long term biosensor was made to detect nitric oxide (NO) levels in the body for monitoring cancerous cells. This is the first time that implantable nanosensors could be used within the body for this extended period of time. For the biosensor to last under the skin, it is embedded in a gel made from a polymer called alginate for protection.