The octopuses of war: WW1 propaganda maps in pictures 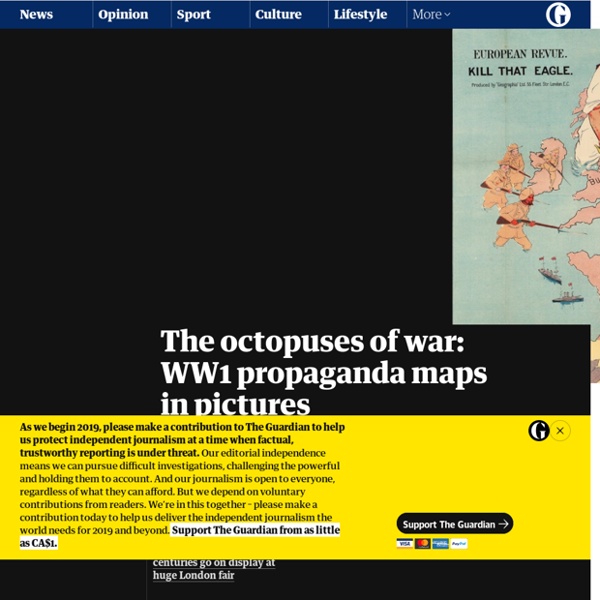 Here’s How America Uses Its Land Using surveys, satellite images and categorizations from various government agencies, the U.S. Department of Agriculture divides the U.S. into six major types of land. The data can’t be pinpointed to a city block—each square on the map represents 250,000 acres of land. But piecing the data together state-by-state can give a general sense of how U.S. land is used. Gathered together, cropland would take up more than a fifth of the 48 contiguous states. How where you're born influences the person you become click2x As early as the fifth century, the Greek historian Thucydides contrasted the self-control and stoicism of Spartans with the more indulgent and free-thinking citizens of Athens. Today, unique behaviors and characteristics seem ingrained in certain cultures. Italians wildly gesticulate when they talk.

Native cartography: a bold mapmaking project that challenges Western notions of place Aeon email newsletters are issued by the not-for-profit, registered charity Aeon Media Group Ltd (Australian Business Number 80 612 076 614). This Email Newsletter Privacy Statement pertains to the personally identifying information you voluntarily submit in the form of your email address to receive our email newsletters More generally, when visiting the Aeon site you should refer to our site Privacy Policy here. Muslims lived in America before Protestantism even existed The first words to pass between Europeans and Americans (one-sided and confusing as they must have been) were in the sacred language of Islam. Christopher Columbus had hoped to sail to Asia and had prepared to communicate at its great courts in one of the major languages of Eurasian commerce. So when Columbus’s interpreter, a Spanish Jew, spoke to the Taíno of Hispaniola, he did so in Arabic. Not just the language of Islam, but the religion itself likely arrived in America in 1492, more than 20 years before Martin Luther nailed his theses to the door, igniting the Protestant reformation. Moors – African and Arab Muslims – had conquered much of the Iberian peninsula in 711, establishing a Muslim culture that lasted nearly eight centuries. By 1491, the Spanish monarchs Ferdinand and Isabella completed the Reconquista, defeating the last of the Muslim kingdoms, Granada.

Cowboy cartographer - pictorial maps Calif. Joseph Jacinto Mora knew all the dogs in Carmel-By-The-Sea, California. He knew Bess, a friendly brown mutt who hung out at the livery stables. He knew Bobby Durham, a pointy-eared rascal who, as Mora put it, “had a charge [account] and did his own shopping at the butcher’s.” He knew Captain Grizzly, an Irish terrier who went to town with his muzzle on and invariably came back carrying it, having charmed a kind stranger into taking it off. If you spend time with Mora’s map of the town—which was first printed in 1942—you’ll know the town dogs of that era, too. They’re all stacked in a column on the right side, lovingly described and illustrated, and looking as natural as those items you’d be more inclined to expect on a map: streets, land masses, the compass rose.

The Artificial Intelligence Revolution: Part 1 PDF: We made a fancy PDF of this post for printing and offline viewing. Buy it here. (Or see a preview.) Note: The reason this post took three weeks to finish is that as I dug into research on Artificial Intelligence, I could not believe what I was reading. It hit me pretty quickly that what’s happening in the world of AI is not just an important topic, but by far THE most important topic for our future. Three reasons to think twice about mapping the brain The brain has a geography that matters. The cerebral cortex (the grey outer layer of the brain) is folded into our skulls in such a way as to reduce the wiring length of our neurons and improve cognitive function. Needless to say, this folding is incredibly complex.

Plant orchestra — The singing plants of Damanhur explained Recently Digital Journal reported on the singing plants of Damanhur Eco-Society, which included a video of the music made by these plants. The following is more information about the research they have done and the results achieved. Researchers use devices which they have created to measure the re-activity of the plants to their environment. The devices judge the plants' capacity to learn and communicate. Using a simple principle, the researchers used a variation of the Wheatstone bridge.