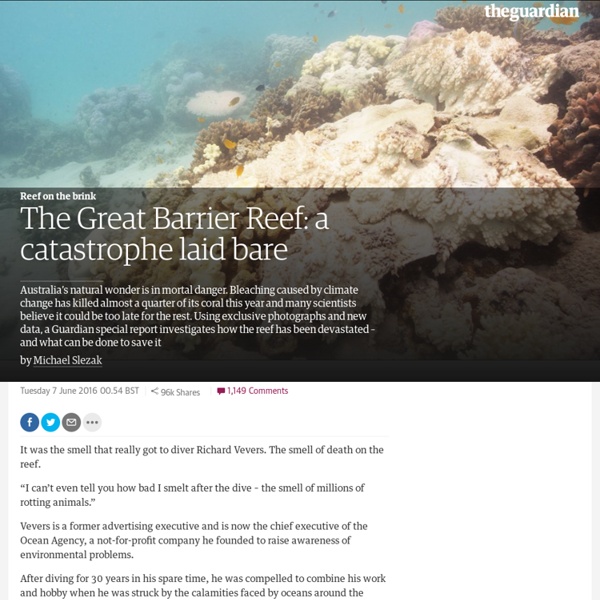 It was the smell that really got to diver Richard Vevers. The smell of death on the reef. “I can’t even tell you how bad I smelt after the dive – the smell of millions of rotting animals.” Vevers is a former advertising executive and is now the chief executive of the Ocean Agency, a not-for-profit company he founded to raise awareness of environmental problems. After diving for 30 years in his spare time, he was compelled to combine his work and hobby when he was struck by the calamities faced by oceans around the world. His job these days is rather morbid. With the world now in the midst of the longest and probably worst global coral bleaching event in history, it’s boom time for Vevers. Even with all that experience, he’d never seen anything like the devastation he saw last month around Lizard Island in the northern third of Australia’s spectacular Great Barrier Reef. “It was one of the most disgusting sights I’ve ever seen,” he says. “It’s like a forest where plants compete for light. Related:  Climate change & affects on flora & fauna • Effects on Nature • Down under

what_an_invasive_species_in_nepal_tells_us_about_our_climate_future © 2009 Jeevan Jose/Wikimedia Commons Nepal’s Chitwan National Park, a stretch of grasslands, forests, and wetlands in the humid foothills of the Himalayas, is home to an enormous diversity of plants and animals. A UNESCO World Heritage Site, the park provides refuge to Bengal tigers and some of the last of the world’s single-horned Asiatic rhinoceroses, among other endangered species. But a more immediate menace threatens the people, flora, and fauna in the region: a bright green flowering vine named Mikania micrantha that is smothering everything in its path so aggressively that by 2010 it had covered at least one-fifth of the national park. But what if Mikania micrantha could be used to solve some of the very problems it’s causing? Implementing this adaptation requires innovations in harvesting, to develop a user-friendly tool that ensures the entire plant is yanked out. That last sentence might seem to be missing a word (shouldn’t it be “adapt to climate change”?) Why?

Study Finds that Ocean Could Suffocate by 2030 Imagine if we were running out of oxygen on land. According to a study, that’s happening in the ocean. Image: Shutterstock. It seems that every week, a new study comes out showing just how much damage we’re doing to our planet. This last one’s a doozy, though: according to Matthew Long, an oceanographer at the National Center for Atmospheric Research, if we continue along the road we’re on, the ocean could begin to suffocate in about 15 years. Actually. According to Ocean Scientists for Informed Policy, “ocean deoxygenation refers to the loss of oxygen from the oceans due to climate change.” “Long-term ocean monitoring shows that oxygen concentrations in the ocean have declined during the 20th century, and the new IPCC 5th Assessment Report (AR5 WG1) predicts that they will decrease by 3-6% during the 21st century in response to surface warming,” the website explains. Deoxgenation due to climate change is already detectable in some parts of the ocean. What does it all come down to?

Sustainable Living Festival ‹ Onya Magazine The Sustainable Living Festival, Australia’s biggest sustainability event, rolls into Victoria again on the 11th of February. Packed with sustainability action – from global green leaders to vegan bodybuilders, great debates to speed dates, organic philosophy to organic feasting – there’s something for everyone with an interest in the future of our planet. This year’s festival theme is Australia – the Lucky Country. To bring this message home and to tell us how it can be done, the festival’s keynote speaker for 2012 is Hans-Josef Fell, a man many call the father of renewable energy worldwide. The Festival’s flagship Big Weekend at Melbourne’s Federation Square (17th–19th February) will be a swag full of fun. There’s also the Big Weekend’s ever-popular Green Market, where over 100 exhibitors showcase sustainable solutions from transport to garden gear to homewares. For further information, visit the Sustainable Living Foundation website or download a copy of the festival program. Share On

Thanks to climate change, the Arctic is turning green Using 29 years of data from Landsat satellites, researchers at NASA have found extensive greening in the vegetation across Alaska and Canada. Rapidly increasing temperatures in the Arctic have led to longer growing seasons and changing soil for plants. (Cindy Starr/NASA’s Goddard Space Flight Center) Earlier this month, NASA scientists provided a visualization of a startling climate change trend — the Earth is getting greener, as viewed from space, especially in its rapidly warming northern regions. And this is presumably occurring as more carbon dioxide in the air, along with warmer temperatures and longer growing seasons, makes plants very, very happy. Now, new research in Nature Climate Change not only reinforces the reality of this trend — which is already provoking debate about the overall climate consequences of a warming Arctic — but statistically attributes it to human causes, which largely means greenhouse gas emissions (albeit with a mix of other elements as well). business true

Fukushima Radiation Has Contaminated The Entire Pacific Ocean - And It's Going to Get Worse The nuclear disaster has contaminated the world's largest ocean in only five years and it's still leaking 300 tons of radiation every day. Credit – NOAA What was the most dangerous nuclear disaster in world history? Most people would say the Chernobyl nuclear disaster in Ukraine, but they’d be wrong. Radioactive Debris from Fukushima approaching North America’s western coast Credit – RT If that weren’t bad enough, Fukushima continues to leak an astounding 300 tons of radioactive waste into the Pacific Ocean every day. It should come as no surprise, then, that Fukushima has contaminated the entire Pacific Ocean in just five years. Even if we can’t see the radiation itself, some parts of North America’s western coast have been feeling the effects for years. Credit – AP Further south in Oregon, USA, starfish began losing legs and then disintegrating entirely when Fukushima radiation arrived there in 2013. However, Fukushima is having a bigger impact than just the West coast of North America.

Images of new bleaching on Great Barrier Reef heighten fears of coral death | Environment The embattled Great Barrier Reef could face yet more severe coral bleaching in the coming month, with areas badly hit by last year’s event at risk of death. Images taken by local divers last week and shared exclusively with the Guardian by the Australian Marine Conservation Society show newly bleached corals discovered near Palm Island. Most of the Great Barrier Reef has been placed on red alert for coral bleaching for the coming month by the US National Oceanic and Atmospheric Administration (NOAA). Its satellite thermal maps have projected unusually warm waters off eastern Australia after an extreme heatwave just over a week ago saw land temperatures reach above 47C in parts of the country. According to the Great Barrier Reef Marine Park Authority, sea surface temperatures from Cape Tribulation to Townsville have been up to 2C higher than normal for the time of year for more than a month. “The reef will be gone before annual severe bleaching,” she said.

Climate Change Is Forcing Trees to Move Northwest - The Atlantic As the consequences of climate change strike across the United States, ecologists have a guiding principle about how they think plants will respond. Cold-adapted plants will survive if they move “up”—that is, as they move further north (away from the tropics) and higher in elevation (away from the warm ground). A new survey of how tree populations have shifted over the past three decades finds that this effect is already in action. But there’s a twist: Even more than moving poleward, trees are moving west. About three-quarters of tree species common to eastern American forests—including white oaks, sugar maples, and American hollies—have shifted their population center west since 1980. These results, among the first to use empirical data to look at how climate change is shaping eastern forests, were published in Science Advances on Wednesday. Trees, of course, don’t move themselves. The results are fascinating in part because they don’t immediately make sense.

Related:
Related:  Climate change & affects on flora & fauna   -  Effects on Nature   -  Down under