Earth - The making of me and you 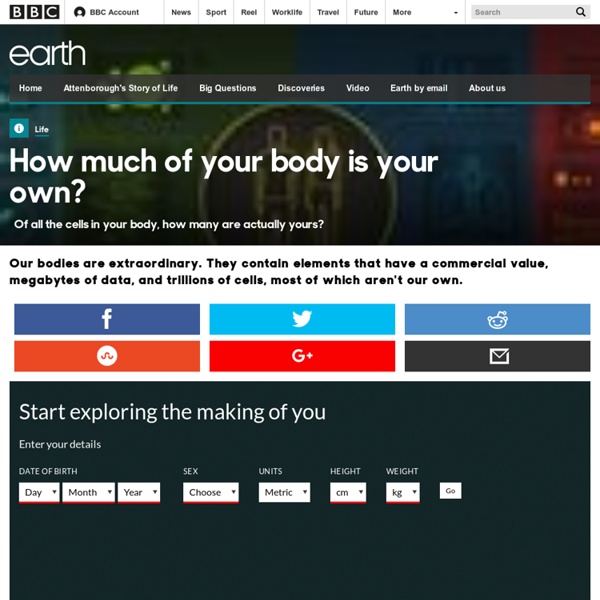 This story is part of BBC Earth's "Best of 2016" list, our greatest hits of the year. Browse the full list. • Bill Gates is actually worth $1,956• Canadian pop star Justin Bieber has five times fewer cells in his brain than in his liver• Top tennis player Serena Williams has 24.5 trillion red blood cells powering her body• Internet and social media pioneer Mark Zuckerberg’s body contains 800MB of data• President Barack Obama’s head rules his heart; his brain weighs 1.4kg, his heart just 0.4kg Welcome to The Making of Me and You, a unique, new digital interactive from BBC Earth that details extraordinary personalised facts. Just input your date of birth, sex at birth, height and weight, and choose the metric or imperial units that make most sense to you. And instantly find out: Explore, enjoy, and share with your friends either the whole page, or your favourite insights, comparing your vital statistics. This is our story, the story of the making of me and you. Lead photo credit: Beyond Words

Zygote Body - Interactive Human Body Browser for your Whiteboard Biologists who wanted a human body browser in the same style as Google Earth, Google Sky, Google Moon etc got very excited a few years ago when Google brought out its Body Browser. They then got sad when Google retired it. Well it looks like it’s back (sort of) under new management and is now called Zygote Body. But it looks exactly the same as it did when it was Google Body, which is great. Zygote Body gives you a fully-explorable 3D body.

Why Do People Stick Out and Bite Their Tongues When Concentrating? Jon K. asks: Why do I sometimes naturally bite my tongue when concentrating on things? The short answer as to why some people bite their tongue when concentrating is that the tongue requires a surprising amount of brain power to manage- beyond general motor control, it’s covered in various types of sensors constantly providing feedback to your brain about what’s going on in your mouth and making sure your teeth aren’t mashing the tongue. Even when you’re not using it for speaking, it’s still continually moving slightly as it imperceptibly forms words you are thinking about.

Life Sciences Outreach Program The following resources were developed for classroom use by high school biology teachers who participated in MCB-HHMI Outreach's Summer 2009 "Experimental Biology and Multimedia Workshop". This year's topic was "Physiology". Keep in mind that lesson formats vary greatly because each was developed with a particular classroom in mind.

There Are Three Surviving Elephant Species And They Have A Mammoth Inheritance There are three living species of elephants, not two, and their family tree is more complex than anyone realized, genetic analysis has revealed. The finding is important because it adds urgency to the quest to save the African forest elephant. It also represents the debut of a genetic technique that could help us understand other animals' heritage. Elephants famously come in African and Asian species, with differences in size and whether the females have tusks. However, biologists have suspected for some time that Africa hosts two species, the forest (Loxodonta cyclotis) and savannah (Loxodonta africana) elephant. Troublingly, not all relevant agencies have acknowledged the difference, often treating the two as subspecies.

What's the point of having a nose? - BBC Reel Big ideas reflecting our evolution and what makes us intrinsically human. NeuroscienceThe quest to understand consciousnessCould lab-grown brains solve the mystery of consciousness?Watch now What's the point of noses? Trump’s Taxes Show Chronic Losses and Years of Income Tax Avoidance The Times obtained Donald Trump’s tax information extending over more than two decades, revealing struggling properties, vast write-offs, an audit battle and hundreds of millions in debt coming due. Donald J. Trump paid $750 in federal income taxes the year he won the presidency. In his first year in the White House, he paid another $750. He had paid no income taxes at all in 10 of the previous 15 years — largely because he reported losing much more money than he made. As the president wages a re-election campaign that polls say he is in danger of losing, his finances are under stress, beset by losses and hundreds of millions of dollars in debt coming due that he has personally guaranteed.

The Biology Corner This worksheet provides steps for identifying structures of the grasshopper, with a focus on the external anatomy and mouthparts. The lesson can be part of a larger unit on insects … In animals, form and function are closely related. This concept is illustrated very simply by looking at a variety of bird species where the shape of the beak and … Instructions include how to identify crayfish mouthparts, eyes, and appendages.

Not an adaptation Misconceptions about natural selection and adaptation : Not an adaptation It's tempting to look for adaptive explanations for everything, from the shape of a flower petal, to the way your dog turns in a circle before it lies down to sleep, to your neighbor's strawberry blond hair. Scientists win historic Nobel chemistry prize for 'genetic scissors' Image copyright Getty Images Two scientists have been awarded the 2020 Nobel Prize in Chemistry for developing the tools to edit DNA. Emmanuelle Charpentier and Jennifer Doudna are the first two women to share the prize, which honours their work on the technology of genome editing. Log In Video The Times’s Quentin Hardy talks with Mary Roach about her new book, “Gulp: Adventures on the Alimentary Canal.” Overview | In this lesson, students research the digestive system in depth, and then create a detailed walk-through model to illustrate each compartment.Materials | Computers with Internet access, projection equipment, an assortment of art supplies (butcher paper, fabric, yarn, cardboard, colored paper, tissue paper, paints, markers, glue, staplers, tape, scissors, etc.)