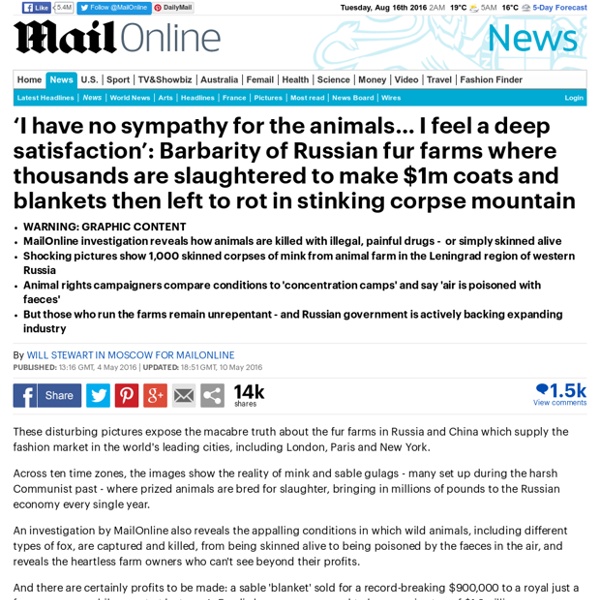 These disturbing pictures expose the macabre truth about the fur farms in Russia and China which supply the fashion market in the world's leading cities, including London, Paris and New York. Across ten time zones, the images show the reality of mink and sable gulags - many set up during the harsh Communist past - where prized animals are bred for slaughter, bringing in millions of pounds to the Russian economy every single year. An investigation by MailOnline also reveals the appalling conditions in which wild animals, including different types of fox, are captured and killed, from being skinned alive to being poisoned by the faeces in the air, and reveals the heartless farm owners who can't see beyond their profits. And there are certainly profits to be made: a sable 'blanket' sold for a record-breaking $900,000 to a royal just a few years ago, while a coat at last year's Fendi show was rumoured to have a price tag of $1.2million. Animals forced to suffer and starve in Russian fur farm

Is Fashion a Credible Platform for Protest? LONDON, United Kingdom — Last week in Paris, Chanel appropriated the visual signifiers of feminist protest for its seasonal runway show. In a finale led by Karl Lagerfeld, a bevy of supermodels took to a catwalk christened “Boulevard Chanel” holding signs with slogans such as “History is Her Story,” “Make Fashion Not War,” and “Tweed Is Better Than Tweet.” On the same day in Hong Kong, a genuine protest was underway. Protesting for the right to democratically elect a candidate of their own choosing, tens of thousands of Hong Kongers formed crowds that throbbed and swelled in the city’s streets. Playing out against this backdrop, the “faux-test” staged on Boulevard Chanel rang especially hollow, repackaging political riot as a light-hearted, Instagram-savvy performance.

How PETA Won the Angora Debate and What It Means for Fashion NEW YORK, United States — In the spring of 2016, a group of top-tier fashion executives convened in midtown Manhattan for a closed-door meeting. The conversation centred on the treatment of animals and the ethics policies they had in place. It was clear that many brands felt more pressure than ever to cooperate with the People for the Ethical Treatment of Animals — the international non-profit organisation widely known as PETA. “Look at what PETA did to angora,” one executive said. “They virtually wiped it out.” Indeed, in 2013, PETA took on the trade in angora rabbit fur in what proved to be one of its most successful campaigns, releasing a video of a rabbit in China — the world's top producer of angora wool — being tortured and mutilated, its fur hand-plucked from its body.

Faux Fur is More Than a Faux Pas, it's Poison One of the arguments most beloved of the anti-fur lobby is that fake fur is actually better for the environment than the real thing. That argument, however, is as fake as the apparel it supports. And some new research has thrown the whole issue around man-made fibres more generally into the limelight. Specifically, researchers at the University of California at Santa Barbara have found that, on average, synthetic fleece jackets release 1.7 grams of microfibers each wash. and that this is having a devastating effect on our rivers, oceans and marine life. It also uncovered that older jackets shed almost twice as many fibres as new ones.

The Blonde Salad Ups the Ante LOS ANGELES, United States — Chiara Ferragni’s stream of selfies has drawn more than 6.5 million followers to her personal Instagram account. But the super-influencer has transformed her digital property The Blonde Salad, which she launched as a personal blog back in 2009 that now attracts an average of 500,000 unique visitors each month, into a full-fledged magazine that relies on plenty more than her outfit photos. “When I started back then, I just wanted a personal space,” says Ferragni, whose movie-star looks and playfully bold Italian style have earned her adoring fans the world over. “But for the last three years, we haven’t been a blog.

Sustainability in the Fashion Industry - Supply Chains Effect on the Environment As one of the biggest players in the global economy, the fashion industry has a responsibility to help protect the environment. We’re commemorating this Earth Week by asking some tough questions about our impact on the planet and what we can do about it. We’ll also be profiling people and companies who are instigating change. We’re calling the series “,” and to kick things off, Maya Singer takes a look at the harsh realities of the fashion supply chain. How ethical fashion brand People Tree empowers people and the planet Has the concept of Ethical Fashion changed since you first started out? Very much so. Twelve years ago when I first launched People Tree in Japan we felt like the only ones – we were telling journalists that even though you don't EAT your clothes, organic is important: we were proving that Fair Trade Fashion was well designed – not hemp sacks.

Do We Have a Responsibility Towards Sustainable Living? Kevin Dooley - Flickr Creative Commons Hands up if you walk into a shop and before you purchase anything, think about how it was made? For many people the answer is probably no! Without passing judgement on buying choices, many of us pick up the cheapest item and don’t give much thought to where and how it got there. One of the biggest industries we all tap in to is fashion. What Sustainability Means To The Millennial Generation Jo Godden, Founder of RubyMoon, discusses how brands can limit their environmental impact worldwide According to Goldman Sachs, there are around 92 million millennials in the US currently, making them the largest demographic in American history so far. Critically, they are also set to be the most important consumer group yet, with estimates of annual spending projected at around $200 billion by 2017, and $10 trillion over their lifetimes as consumers. With these figures comes the all-important question of how business can best cater to this multi-faceted millennial marketplace—the real questions being what do they value?

Burberry teams up with Harrods for 2016 Christmas Windows London department store Harrods is working with fashion house Burberry to tell “A Very British Fairy Tale.” The retailer’s effort for holiday 2016 will kick off in November when its window displays facing Brompton Road are unveiled. Holiday windows attract crowds of shoppers and passersby, allowing the retail host to become part of consumers' traditions. A British wonderlandHarrods’ holiday windows will see the creation of a snow covered landscape and two small children as its protagonists. The children will be shown, window by window, traveling to an English country home, but with an imaginative twist. The window panes will include wintery scenes with flying cars, floating bathtubs and secret trails.

Stella McCartney Admits That Even She's Not 100% Eco-Friendly In late April, the Financial Times’s (and soon to be New York Times's) Vanessa Friedman gave a speech at the Copenhagen Fashion Summit on the paradox of sustainability in the fashion industry. With designers piling on season after sub-season, the imperative to push new styles stands in opposition to any notion of permanence, Friedman argued. There are a few sides to sustainability in fashion. One is the manner in which a product is made — be that environmental practices or the treatment of workers, the failing of which was tragically exemplified in the Rana Plaza factory collapse last year. The other is the rate at which consumers are expected to replace that product with the next, more stylish thing. Both are dependent on fashion’s attitude toward values-driven business, which, Stella McCartney noted in an interview with Friedman at the FT Business of Luxury Summit in Mexico on Monday, is a notoriously fickle thing.

Throwaway Clothing Culture, Ivanka Trump vs Working Moms "Pressure Mounts on Retailers to Reform Throwaway Clothing Culture" (The Guardian) "Americans dispose of about 12.8m tons of textiles annually. But a growing number of environmentalists and clothing retailers say it’s time to begin making new clothes out of old items on a large scale, reports Yale Environment 360." "Ivanka Trump Champions Working Moms — Except the Ones Who Design Her Clothes" (The Washington Post) "The company that designs her clothing line, including the $157 sheath she wore during her convention speech, does not offer workers a single day of paid maternity leave." "Indian Apparel Makers Try on Ethical Supply Chains for Size" (Reuters) "Handloom attire was once regarded as fit only for politicians and villagers — now it's seeing a revival, with demand growing for ethical fashion, even as mass-market clothing still dominates."

Faux Fur is the Only Responsible Choice A response to Mark Oaten’s article “Faux fur is more than faux pas, it’s poison”. Real fur sales are experiencing a dramatic drop since 2014 while the faux fur sector is enjoying a remarkable boom with a 10% increase in demand. This might explain why Mark Oaten, head of the International Fur Trade Federation, has been constantly trying to denigrate the faux fur sector.