America Has Never Been So Ripe for Tyranny 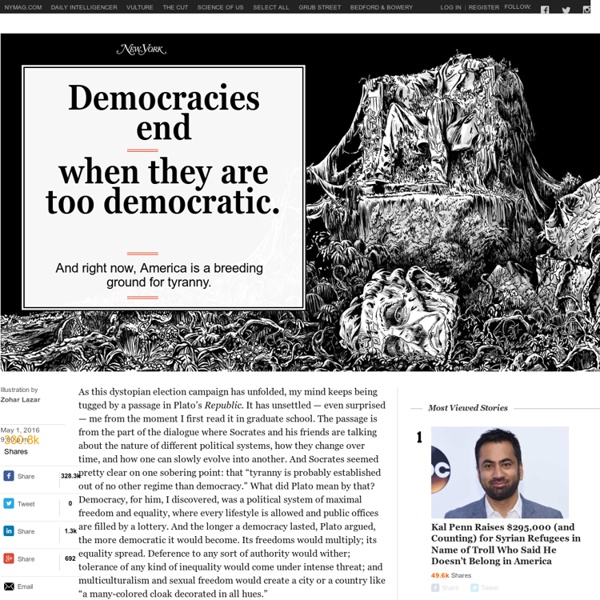 And right now, America is a breeding ground for tyranny. Illustration by Zohar Lazar As this dystopian election campaign has unfolded, my mind keeps being tugged by a passage in Plato’s Republic. It has unsettled — even surprised — me from the moment I first read it in graduate school. The passage is from the part of the dialogue where Socrates and his friends are talking about the nature of different political systems, how they change over time, and how one can slowly evolve into another. This rainbow-flag polity, Plato argues, is, for many people, the fairest of regimes. The very rich come under attack, as inequality becomes increasingly intolerable. And it is when a democracy has ripened as fully as this, Plato argues, that a would-be tyrant will often seize his moment. He is usually of the elite but has a nature in tune with the time — given over to random pleasures and whims, feasting on plenty of food and sex, and reveling in the nonjudgment that is democracy’s civil religion. Related:  Government And Social Stuff • RESIST the Orange Sphincter ! • Social Justice

The smug style in American liberalism There is a smug style in American liberalism. It has been growing these past decades. It is a way of conducting politics, predicated on the belief that American life is not divided by moral difference or policy divergence — not really — but by the failure of half the country to know what's good for them. In 2016, the smug style has found expression in media and in policy, in the attitudes of liberals both visible and private, providing a foundational set of assumptions above which a great number of liberals comport their understanding of the world. It has led an American ideology hitherto responsible for a great share of the good accomplished over the past century of our political life to a posture of reaction and disrespect: a condescending, defensive sneer toward any person or movement outside of its consensus, dressed up as a monopoly on reason. The smug style is a psychological reaction to a profound shift in American political demography. The origins of this shift are overdetermined.

When Tyranny Takes Hold What is the precise moment, in the life of a country, when tyranny takes hold? It rarely happens in an instant; it arrives like twilight, and, at first, the eyes adjust. Xu Hongci had been drawn to politics by the promise of dignity. He dreamed of making China strong again, of erasing “injustice and darkness.” For a time, autocracy rewards the true believer, and Xu received a coveted place at Shanghai No. 1 Medical College, to study medicine. Mao told his people to watch their neighbors, to ferret out threats from within and from without. In April, 1958, Xu was sentenced to laogai (“labor reform”), modelled on the Soviet Gulag. Autocrats promise the unobtainable, and in 1958 Mao vowed to catapult his country past Britain in fifteen years. During the next decade, Xu escaped from laogai three times.

She? Ze? They? What’s In a Gender Pronoun Photo WASHINGTON — What happens when 334 linguists, lexicographers, grammarians and etymologists gather in a stuffy lecture hall on a Friday night to debate the lexical trends of the year? They become the unlikely heroes of the new gender revolution. That’s what happened here earlier this month anyway, at a downtown Marriott, where members of the 127-year-old American Dialect Society anointed “they,” the singular, gender-neutral pronoun, the 2015 Word of the Year. As in: “They and I went to the store,” where they is used for a person who does not identify as male or female, or they is a filler pronoun in a situation where a person’s gender identity is unknown. “Function words don’t get enough love,” a man argued from the floor. “We need to accept ‘they,’ and we need to do it now,” shouted another linguist, hidden behind the crowds. Continue reading the main story Gender binary: That’s the idea that there are two distinct genders, one male and one female, with nothing in between. But to Ms.

Afghan Refugees in Pakistan - In Focus For more than three decades, Pakistan has been home to one of the world's largest refugee communities: the more than one million Afghans who have fled years of warfare in their home country. Living in temporary shelters along the Afghanistan-Pakistan border -- and cared for by the the United Nations High Commissioner for Refugees, Pakistan's government, and numerous international care agencies -- this massive and persistent population remains vulnerable to multiple dangers, from outbreaks of disease to violence spilling over from the war next door. Associated Press photographer Muhammed Muheisen has spent the past several years in Pakistan, documenting the lives of these refugees, with a particular focus on the most vulnerable: the children caught up in the chaos as their families try to keep them safe. Muheisen's portraits below are part of the ongoing series here on Afghanistan. [30 photos] Use j/k keys or ←/→ to navigate Choose: Safia Mourad, age 4. Robina Haseeb, age 5.

Why boys don't read As a young boy, Sanjay Mahboobani was a passionate reader. He travelled through time with Jack and Annie in the Magic Tree House series, and devoured each and every Harry Potter book as soon as it hit the local bookstore. But as he got older, Sanjay, who lives in Redondo Beach, CA, began to lose interest in reading — he turned away from books along with his trucks, stuffed animals, and other childish things. Now that Sanjay is in high school, he rarely reads for pleasure. Sanjay is just one example of a trend that education experts are observing with growing alarm: large numbers of boys aren’t reading, and this fact is contributing to a daunting achievement gap between boys and girls. The gender achievement gap The facts are stark: in every state and in every grade, boys are trailing behind girls in reading, according to a 2010 report by the Center on Education Policy, which called this lag, “the most pressing gender-gap issue facing our schools.” Why Johnny doesn’t read Wilhelm agrees.

2016 POST-ELECTION SANITY GUIDE 10 simple questions with thoughtful answers Version 1.3, 12/13/2016 [first posted 12/1/16], By Scott Berkun (@berkun) This answers common questions about the election, what happened, what it means for liberal democracy, concepts you need to know and what to do right now. It’s concise. Entire books will be written about the election and this isn’t one of them. I voted for Clinton, but anyone concerned about a Trump presidency will find this valuable. 1. One of the strangest presidential races in U.S. History books will likely describe it this way: two polarizing candidates (and one historically unpopular one) campaigned in one of the meanest and most surprising races in American history, involving class divisions, urban vs. rural tensions and the unintended consequences of new media. 2. If you voted for Clinton, nearly 64 million people agreed with you. We are living in historic times. Put simply, this is our generation’s turn to live through a challenging era of the American story. 3. 5.

National SEED Project - White Privilege: Unpacking the Invisible Knapsack White Privilege: Unpacking the Invisible Knapsack Downloadable PDF © 1989 Peggy McIntosh "White Privilege: Unpacking the Invisible Knapsack" first appeared in Peace and Freedom Magazine, July/August, 1989, pp. 10-12, a publication of the Women’s International League for Peace and Freedom, Philadelphia, PA. Anyone who wishes to reproduce more than 35 copies of this article must apply to the author, Dr. I was taught to see racism only in individual acts of meanness, not in invisible systems conferring dominance on my group. Through work to bring materials from Women’s Studies into the rest of the curriculum, I have often noticed men’s unwillingness to grant that they are over-privileged, even though they may grant that women are disadvantaged. Thinking through unacknowledged male privilege as a phenomenon, I realized that, since hierarchies in our society are interlocking, there was most likely a phenomenon of white privilege that was similarly denied and protected.

20 best Chrome extensions Part of Google Chrome's appeal lies in its minimal interface, free from stacks of toolbars and rows of icon shortcuts. At the same time, the right extension can improve your Web experience without ruining the browser's stripped-down style. Here we pick out our favourite 20 extensions for Chrome, listed in no particular order of preference. All of these extensions can be found on the Chrome Web Store -- bear in mind that you can sync Chrome extensions across multiple machines if you want to, via the Personal Stuff page of the Settings tab. Let us know about your own favourite extensions in the comments below. 1. The best extensions feel like built-in browser features, which is the case with Google Dictionary. 2. If you're new to Buffer, it spreads out your tweets over a predetermined schedule, so your followers aren't overloaded. 3. 4. 5. 6. Get past the over-the-top name and Awesome Screenshot is a very useful screenshot tool that manages to be both packed with features and easy to use.