How Hyperconnected Cities Are Taking Over the World, According to Parag Khanna 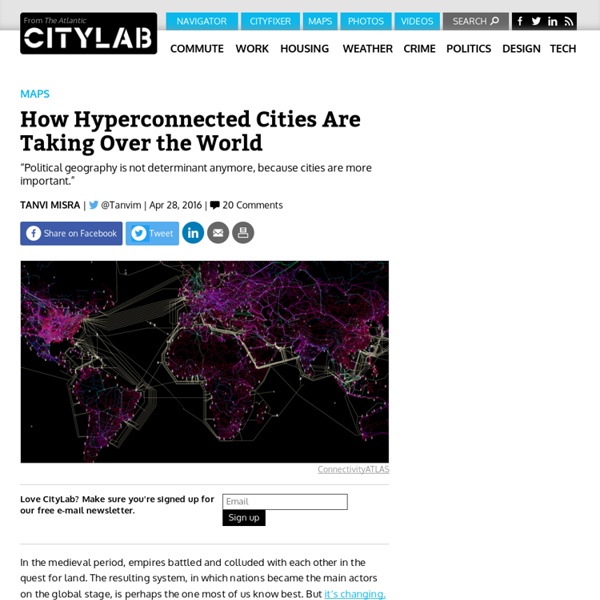 “Political geography is not determinant anymore, because cities are more important.” In the medieval period, empires battled and colluded with each other in the quest for land. The resulting system, in which nations became the main actors on the global stage, is perhaps the one most of us know best. But it’s changing. We’re now moving toward a new era where insular, political boundaries are no longer as relevant. More and more people are identifying as “global citizens,” and that’s because we’re all more connected than we’ve ever been before. “Geography is destiny,” one of the famous adages about the world, is becoming obsolete. Khanna spoke with CityLab at the The Atlantic's 5th annual Summit on the Economy this week, where he was one of the featured speakers. Could you explain why cities are at the heart of this global shift in power? Cities are a key element to that evolution for many reasons. Diplomacy among cities is the return of an ancient pattern. We are a visual species.

Will "deliverology" work for the federal government? Written by Date published Share Story In January, the newly minted government of Justin Trudeau held its first cabinet retreat. untitled The Empire is becoming thoroughly unpredictable. It is attacking on all fronts. It lost all its shame and decency. New Cold War is now in full swing and the West is using both old and new tactics, in order to demonize and discredit all of its opponents: from Russia to China, Venezuela, North Korea, South Africa and Iran. Our anti-imperialist media outlets, including those of the RT, TeleSUR, Press TV, CCTV and Sputnik are being labeled as ‘propaganda’ channels.

Lessons from the World’s Largest Megacity​ If a product says “Made in China,” chances are that product, or parts of it, came from the Pearl River Delta. This region in southern China is the world’s largest megacity: eight major urbanized zones with a combined population of 55 million people, spread in a horseshoe-shaped ring around a complex watershed ecosystem. Hong Kong, Shenzhen, and Guangzhou dominate the region, which, incorporating five other emerging cities, has experienced explosive growth over the past 30 years.

‘Smart’ Cities, ‘Brain Belts’ and Other Places Changing the Economy Robert Litan is an adjunct senior fellow at the Council on Foreign Relations and has directed economic research at the Brookings Institution, the Kauffman Foundation, and Bloomberg Government. His most recent book is “Trillion Dollar Economists.” He is on Twitter:@BobLitan. It’s easy amid the hype of a presidential campaign and frequent media reports of top-line numbers about the U.S. economy’s performance–gross domestic product, the unemployment rate, inflation–to overlook the people and technologies reshaping this country. James Fallows wrote about these remarkable developments in the March issue of the Atlantic.

untitled According to wikipedia, Globalisation is the process of international integration arising from the interchange of world views, products, ideas and other aspects of culture. However, over the last ten years there has been a sea change decline in all the indicators that would measure the success of this model. Democracy, economic growth, freedom and an interchange of world views and culture has all but been abandoned to a vice like grip of globalisation driven more by the corporate principles of power and greed resulting in war, terrorism, a biblical refugee crisis, fear and a fully co-opted media. The Economist has just published its annual index on democracy. They found that out of 167 countries, only twenty are “full democracies”. Less than 13 per cent of the world’s countries can now claim to be a democracy.

Redefining Global Cities The world’s largest metropolitan areas concentrate the drivers of global prosperity, but there isn’t one way to be a global city—this report defines seven types of global cities, providing a valuable lens through which to understand an evolving global economy. As societies and economies around the world have urbanized, they have upended the classic notion of a global city. No longer is the global economy driven by a select few major financial centers like New York, London, and Tokyo. Today, members of a vast and complex network of cities participate in international flows of goods, services, people, capital, and ideas, and thus make distinctive contributions to global growth and opportunity. And as the global economy continues to suffer from what the IMF terms “too slow growth for too long,” efforts to understand and enhance cities’ contributions to growth and prosperity become even more important.

In Novel Tactic on Climate Change, Citizens Sue Their Governments The current plans and efforts to battle climate change are not enough, Ms. Barrett, 17, said, adding that her generation, with its passion and social media tools, would make a difference. “We want our children to look back in the textbooks and say, ‘Oh, our parents’ generation — they really fought for us,’ ” she said. The lawsuit calls for the courts to order the government to stop the “permitting, authorizing and subsidizing of fossil fuels” — by, for example, canceling plans for projects like a liquefied natural gas export terminal in Oregon — and “to develop a national plan to restore Earth’s energy balance, and implement that national plan so as to stabilize the climate system.”

Globalisation as we know it is over – and Brexit is the biggest sign yet In among the shock from the EU referendum result, the risk of contagion was raised. Analysts asked which EU country might leave next and whether this unravelling could shatter the postwar European order. A month later, it’s clear that Brexit was less a cataclysmic cause than a symptom; a manifestation of global forces unleashed by the 2008 global financial crisis, including slower growth, rising inequality, and a widening backlash against open borders and incumbent leaders. Inside Europe the political earthquake is receding, with the installation of a new UK prime minister who, ostensibly, did not want to leave the EU. Yet even if Brexit does not herald the unravelling of Europe or of the global economy, it is the most important sign yet that the era of globalisation as we have known it is over.

New York City At Night - Aerial Photos of New York City There's something about New York City and the way it pulses. When you're in the middle of it, you feel it, but it's nearly impossible to capture the electricity of the ever-beating grid. Photographer Vincent Laforet found a way to do just that with his impressive series of aerial images of New York City, shot out of an open-door helicopter in the middle of the night. As Laforet said on his blog: This was an incredible adventure—and to be honest—self-imposed. In Search of Lost Solidarities — SWITCH COLLECTIVE Because Switch Collective aims to empower people to redesign their work lives in a context of ever-increasing change, we think a lot about all issues related to the future of work. And the subject of “lost solidarities” in high on our list! Work is changing increasingly fast Salaried work is still the norm: the ratio ‘salaried workers / all workers’ is still over 90%! But it has peaked and is now clearly on the decrease.