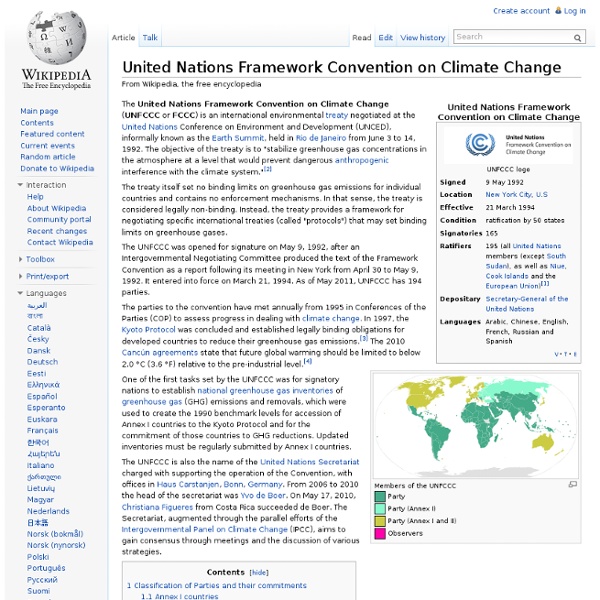 The United Nations Framework Convention on Climate Change (UNFCCC) is an international environmental treaty negotiated at the United Nations Conference on Environment and Development (UNCED), informally known as the Earth Summit, held in Rio de Janeiro from 3 to 14 June 1992. The objective of the treaty is to "stabilize greenhouse gas concentrations in the atmosphere at a level that would prevent dangerous anthropogenic interference with the climate system".[2] The treaty itself set no binding limits on greenhouse gas emissions for individual countries and contains no enforcement mechanisms. In that sense, the treaty is considered legally non-binding. The UNFCCC was opened for signature on 9 May 1992, after an Intergovernmental Negotiating Committee produced the text of the Framework Convention as a report following its meeting in New York from 30 April to 9 May 1992. Treaty[edit] Later negotiations[edit] Kyoto Protocol[edit] Bali Action Plan[edit] Copenhagen and Cancún[edit] Parties[edit] Related:  EARTH SUMMITS: STOCKHOLM 1972 -> RIO 1992 -> PARIS 2015 • Stato dell'arte

United Nations Climate Change conference The United Nations Climate Change Conferences are yearly conferences held in the framework of the United Nations Framework Convention on Climate Change (UNFCCC). They serve as the formal meeting of the UNFCCC Parties (Conference of the Parties, COP) to assess progress in dealing with climate change, and beginning in the mid-1990s, to negotiate the Kyoto Protocol to establish legally binding obligations for developed countries to reduce their greenhouse gas emissions.[1] From 2005 the Conferences have also served as the "Conference of the Parties Serving as the Meeting of Parties to the Kyoto Protocol" (CMP);[2] also parties to the Convention that are not parties to the Protocol can participate in Protocol-related meetings as observers. From 2011 the meetings have also been used to negotiate the Paris Agreement as part of the Durban platform activities until its conclusion in 2015, which created a general path towards climate action. Contents 1995: COP 1, Berlin, Germany[edit]

Framework for developing a municipal adaptation plan This article originally appeared in Tiempo Issue 87 April 2008 By Pierre Mukheibir and Gina Ziervogel Introduction In recent years, reducing vulnerability to climate change has become an urgent issue in low- and middle-income countries, and is at the forefront of any sustainable development policy agenda. Adaptation to climate change is a process whereby individuals and communities seek to respond to ‘actual or expected climatic stimuli or their effects’. National Adaptation Plans of Action (NAPA) have been developed recently under the United Nations Framework Convention on Climate Change (UNFCCC) for Least Developed Countries (LDCs). This article presents an overarching framework developed for a municipal level approach to adapting sectors to climate impacts Towards a framework for adaptation to climate change at municipal level These principles should continually be reflected on to ensure adaptation activities are achieving their desired goals. Conclusion Note: Contact: gina@csag.uct.ac.za

Algeria focuses on the carbon challenge - CNBC: Energy Opportunities Algeria may appear an unlikely leader in clean energy, but the Minister of Energy and Mines says he’s proud his country is an early contributor to the climate change solution. There’s been no real financial gain for Algeria to store the stripped CO2 from its natural gas since 2004, but Dr.Youcef Yousfi says it’s his country’s commitment to the environment that prompted this decision years ago. “These important projects were developed on a voluntary basis, as Algeria has no obligation to reduce its greenhouse gas emissions and did not benefit from any funding mechanisms, like the Green Development Mechanism, GDM specified in the Kyoto Protocol.” In the drive to find an ideal combatant to greenhouse gas emissions, the concept of carbon capture and storage, CCS is now gaining popularity on a global scale. The climate change debate is looking for many answers and CCS it is argued, ticks a few challenging boxes. Chapman commends the work and experience in Algeria.

The climate has always changed. What do you conclude? Probably everyone has heard this argument, presented as objection against the findings of climate scientists on global warming: “The climate has always changed!” And it is true: climate has changed even before humans began to burn fossil fuels. So what can we conclude from that? A quick quiz Do you conclude… (1) that humans cannot change the climate? (2) that we do not know whether humans are to blame for global warming? (3) that global warming will not have any severe consequences? (4) that we cannot stop global warming? The answer Not one of these answers is correct. (1) The opposite conclusion is correct: if the climate had hardly changed during the course of the Earth’s history (despite variable incoming solar radiation and changing amounts of CO2 in the atmosphere), then we would conclude that there are strong stabilizing feedbacks in the climate system. Paleoclimatologists determine the climate sensitivity from data from the Earth’s history. (2) Imagine there has been a forest fire.

2015 United Nations Climate Change Conference The 2015 United Nations Climate Change Conference, COP 21 or CMP 11 was held in Paris, France, from 30 November to 12 December 2015. It was the 21st yearly session of the Conference of the Parties (COP) to the 1992 United Nations Framework Convention on Climate Change (UNFCCC) and the 11th session of the Meeting of the Parties (CMP) to the 1997 Kyoto Protocol.[1] The conference negotiated the Paris Agreement, a global agreement on the reduction of climate change, the text of which represented a consensus of the representatives of the 196 attending parties.[2] The agreement enters into force when joined by at least 55 countries which together represent at least 55 percent of global greenhouse gas emissions.[3][4][5] On 22 April 2016 (Earth Day), 174 countries signed the agreement in New York, [6] and began adopting it within their own legal systems (through ratification, acceptance, approval, or accession). Background[edit] Global carbon dioxide emissions by country in 2015. China (29.5%)

Canada and the Kyoto Protocol Map of Canada showing the increases in GHG emissions by province/territory in 2008, compared to the 1990 base year 50%+ increase 30%–50% increase 20%–30% increase 10%–20% increase 0%–10% increase 0%–10% decrease Each square represents 2 tonnes {{CO2}} eq. per capita Canada was active in the negotiations that led to the Kyoto Protocol in 1997,[1] and the Liberal government that signed the accord in 1997 also ratified it in parliament in 2002.[2] Canada's Kyoto target was a 6% total reduction by 2012 compared to 1990 levels (461 Mt) (GC 1994).[3][notes 1] However, in spite of some efforts, federal indecision led to increases in GHG emissions since then. Debates surrounding the implementation of Kyoto in Canada are informed by the nature of relationships between national, provincial, territorial and municipal jurisdictions. In 2009 Canada signed the Copenhagen Accord, which, unlike the Kyoto Accord, is a non-binding agreement. Canada and Kyoto: a Timeline[edit] Overview[edit] The Energy Sector[edit]

Earth Summit The Earth Summit was a UN event The United Nations Conference on Environment and Development (UNCED), also known as the Rio Summit, Rio Conference, and Earth Summit (Portuguese: ECO92), was a major United Nations conference held in Rio de Janeiro from 3 to 14 June 1992. In 2012, the United Nations Conference on Sustainable Development was also held in Rio, and is also commonly called Rio+20 or Rio Earth Summit 2012. It was held from 13 to 22 June. Overview[edit] 172 governments participated, with 116 sending their heads of state or government.[1] Some 2,400 representatives of non-governmental organizations (NGOs) attended, with 17,000 people at the parallel NGO "Global Forum" (also called Forum Global), who had Consultative Status. The issues addressed included: An important achievement of the summit was an agreement on the Climate Change Convention which in turn led to the Kyoto Protocol. Results[edit] The Earth Summit resulted in the following documents: See also[edit] References[edit]

Biochar | Biochar Farms In physical terms, biochar is simply the charred remains is formed when plant material is heated in an oxygen free environment–a process scientists call “pyrolysis.” Unlike charcoal which is very similar, biochar is created specifically to improve soil structure and ehnance crop productivity. “Net energy,” or the total amount of energy yielded from the process, is positive meaning it generates more energy than it consumes. Because not all of the carbon is combusted (approximately 10-50 percent of the total carbon is retained as biochar), significant carbon can be returned to the soils and therefore the process is considered to be “carbon negative.” Unlike other biofuels and bioenergy platforms, biochar does not necessitate using valuable agricultural lands or deforesting already vulnerable ecosystems as many other bioenergy systems would required. On one hand biochar is fairly simple. Microscopic picture of biochar (Courtesy of Iowa State Biorenewable Center) Scientific Papers:

Status of Ratification Kyoto, 11 December 1997 Entry into force: 16 February 2005, in accordance with article 25 (1) in accordance with article 25 (3) which reads as follows: "For each State or regional economic integration organization that ratifies, accepts or approves this Protocol or accedes thereto after the conditions set out in paragraph 1 above for entry into force have been fulfilled, this Protocol shall enter into force on the ninetieth day following the date of deposit of its instrument of ratification, acceptance, approval or accession.". Registration: 16 February 2005, No. 30822. Status: Signatories: 83. Parties: 192 Note: The Protocol was adopted at the third session of the Conference of the Parties to the 1992 United Nations Framework Convention on Climate Change (“the Convention”), held at Kyoto (Japan) from 1 to 11 December 1997. "w" indicates withdrawal End Note: (3) With a territorial exclusion to the Faroe Islands (5) With the following declaration:

Will the Collapse of Civilization Begin With Global Corporatist Totalitarianism? I‘ve just finished reading Dmitry Orlov’s new book The Five Stages of Collapse. It made me realize that I have probably been making two fundamental errors in my thinking about how our civilization culture will collapse, and what we should do to become more resilient in the face of that collapse (taking steps like learning new personal and collective capacities, and re-learning how to create communities). My two errors were the failure to recognize: The Need to Stop Collapse at Stage 3: I have been thinking that there is only one type of collapse, one ‘end game’, though there are many different scenarios about how it will play out. But let me take a step back and start with a brief overview of The Five Stages of Collapse. If you look at the Signs of Collapse in the table above, it is not hard to conclude that the first three stages — Financial, Commercial, and Political Collapse — are already upon us, and we just haven’t recognized them yet. After us, the dragons.

Earth Summit 2002 The World Summit on Sustainable Development, WSSD or ONG Earth Summit 2002 took place in Johannesburg, South Africa, from 26 August to 4 September 2002. It was convened to discuss sustainable development by the United Nations. WSSD gathered a number of leaders from business and non-governmental organizations, 10 years after the first Earth Summit in Rio de Janeiro. (It was therefore also informally nicknamed "Rio+10".) Declarations[edit] The Johannesburg Declaration was the main outcome of the Summit; however, there were several other international agreements. [1] It laid out the Johannesburg Plan of Implementation as an action plan. [2] Agreements[edit] Johannesburg, 27 August: agreement was made to restore the world's depleted fisheries for 2015. Instead of new agreements between governments, the Earth Summit was organized mostly around almost 300 "partnership initiatives" known as Type II, as opposed to Type I Partnerships which are the more classic outcome of international treaties.

Clean Development Mechanism | General Knowledge Today Out of the three mechanisms under the Kyoto Mechanisms, the Clean Development Mechanism is most popular. It is defined by the Article 12 of the Kyoto Protocol. Objectives: There are two broad objectives of the CDM as follows: To help the Non-Annex parties in achieving sustainable development and in contributing to the ultimate objective of the UNFCCC, i.e. to prevent the climate change. Benefits The benefits of the CDM are shown in the following graphics: Process: The Process is shown in the following simple graphics: The above graphics presents the classical structure of the CDM which uses project-by-project process for registering and verifying projects. The countries which are less developed or least developed and the small island states where average project sizes and the scale of national markets tend to be smaller, the relative transaction costs are higher. To address this problem, the CDM Executive Board launched the Programme of Activities (PoA) modality. Programme of Activities (PoA)