The material library your projects deserve 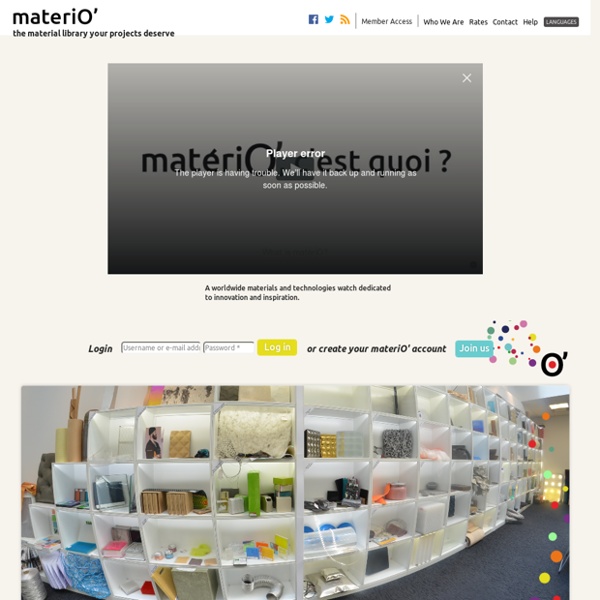 Efficiency vs Effectiveness A key difference Eco-efficiency begins with the assumption of a one-way, linear flow of materials through industrial systems: raw materials are extracted from the environment, transformed into products, and eventually disposed of. In this system, eco- efficient techniques seek only to minimise the volume, velocity, and toxicity of the material flow system, but are incapable of altering its linear progression. Some materials are recycled, but often as an end-of-pipe solution, since these materials are not designed to be recycled. Speak Up Archives HELLO (AND, WELL, GOODBYE)After nearly seven years of blogging, Speak Up has ceased publication. While this may not be a remarkable amount of time in the world of print and online publishing, the intensity with which we — founders, authors and readers alike — undertook it made it seem as it had been decades. For a thorough description on the reasons to close Speak Up, you may read this post, so as not to take much more space here. This web site is a bare-bones version of the archives for quick and easy perusal of more than 1,600 posts — a replica of Speak Up, as it was on closing day, can be found here, and at any point you can add “as-it-was/” after “speakup/” to the URL to see the original version.

IAKC Home - InteriorArchitectureCommittee The American Institute of Architects Board of Directors awarded the 2013 AIA Architecture Firm Award to Tod Williams Billie Tsien Architects, who blend exquisite care for detail with subtle, reverent architecture that's both timeless in its abstracted, meditative forms and materially specific to context and place. The AIA Architecture Firm Award, given annually, is the highest honor the AIA bestows on an architecture firm, and recognizes a practice that has consistently produced distinguished architecture for at least 10 years… Tod Williams Billie Tsien Architects respect the Modernist legacy of orthogonal, functional minimalism, but place it in a wider context of earthen, material richness. Read the full interview with Billie Tsien. Read our previous interviews with Lauren Rottet / Clive Wilkinson / Todd DeGarmo / Rand Elliot

[US] MITRA (Information sur les matériaux et ressources techniques pour les artistes) The Materials Information and Technical Resources for Artists (MITRA) online resource was inspired by the work of the late Mark Gottsegen who organized and implemented the Artist Materials Information Education Network, otherwise known as AMIEN. Mark was able to bring together materials experts from the industry, art conservators, and scientists in an effort to make the most up-to-date knowledge regarding artists’ materials readily available. The eventual disappearance of AMIEN was sorely felt throughout the art community, inspiring a handful of individuals to revive Mark’s vision.

Alexandra Lange Lucia Eames, the only child of Charles Eames and his first wife, Catherine Woermann, died on April 1. An artist and designer herself, after Ray Eames’s death in 1988 Lucia Eames took on the not inconsiderable task of preserving the Eames legacy. The 1976 film “The Chase,” starring Lucia, shows a freedom about the Eames House, a freedom translated into the branching ways the Eames legacy will come down to future generations of designers. Lucia Eames was the first generation to learn from them; thanks to her she will not be the last.

Chistopher Hawthorne, Architecture Critic 6:00 AM PDT, June 15, 2013 Le Corbusier as a force for nature? NEW YORK — It's easy to imagine that "Le Corbusier: An Atlas of Modern Landscapes," a vast, dense and beautifully installed new exhibition at the Museum of Modern Art, began as a kind of parlor game. You can almost picture the curators, Jean-Louis Cohen and Barry Bergdoll, brainstorming to come up with the most unlikely, counterintuitive thesis about Le Corbusier they could — and then setting out to defend it with straight faces, deep scholarship and a good deal of museological firepower. 5:00 AM PDT, June 7, 2013

ALLISON ARIEFF - Opinionator The driverless car, like other utopian pursuits, seems always to be just out of reach. It’s captured the imagination of many for at least a century: in 1918, the Oakland Tribune reported (in a section I wish all newspapers would bring back called “New and Interesting Facts from Science and Life”) that “the new car will be all glass-enclosed and controlled entirely by a set of push buttons. It will have no clutch, gears or transmission, will sit low, have small clearance and punctureless tires.” Design - Phase - Close The Loop Digging through the discards of other people’s closets, we seldom find clothes that are completely worn out -- rather, we usually come across pieces that are still perfectly usable. We could argue that products have two potential expiry dates: the first when they break or fall apart, the second when their owner is simply tired of them. This brings us to the question: how can we integrate emotional aspects into our products to make sure our feelings for them last? What could stimulate users to hold on to things a little longer and to temper the need for new? The value of a product is often said to lie mainly in the momentary satisfaction we get from buying it. Yet after the purchase, these positive feelings tend to fade quickly.

Future Trends Future Trends FT13 synthesizes trend insights, consumer insights, foresight, brand strategy, design thinking, human science and innovation into a CLEAR VISION for capturing future opportunities with a unique blended learning curriculum. It unleashes valuable knowledge, contextualizes the knowledge into relevant examples for you to apply back to your business, and then empowers you to connect with the future in hands on translation sessions and immersion techniques centered on core themes. Repeat - Writings on Architecture in Chicago and the World Harboe at Carson's, Neutra discusses Neutra, Studio/Gang at Columbia College - SCB in Abu Dhabi, and much more: the August architectural calendar On August 12th, Dr Raymond Richard Neutra, son of the famous architecture will lecture on the significance and survival of Neutra's Los Angeles VDL Studio and Residences for AIA Chicago, which is also offering a panel of architects including Walter Eckenhoff and Jackie Koo talking about hotel design throughout the world on Tuesday, the 10th, Christine Caryle discussing her firm's planning work in Abu Dhabi at Solomon Cordwell Buenz on the 11th. On Thursday the 19th, AIA/Chicago will be offering a tour of the new Columbia College Media Production Center with a representative from the building's architects, Studio/Gang, as a guide. The same afternoon, the Glessner House Museum is offering a tour of the recently restored Louis Sullivan formerly known as Carson Pirie Scott by architect Gunny Harboe.

Plastics and the circular economy Q: What is plastic made of? You could divide it into three categories: fossil-based (oil or gas), renewable (organic, biobased) and recycled. The vast majority is made from the first category, only a fraction the second and, when we talk about plastic packaging, about 2% is made from recycled plastics. Virgin plastic has not previously been used. It can be made from renewable sources but is usually made from finite fossil resources. ARBOBLEND® ARBOFILL® ARBOFORM® So that it is easier for you to find your way around when selecting materials, the TECNARO portfolio with more than 3,500 formulas has been divided into three material groups: ARBOBLEND® combines a great number of material types and a wide range of property profiles. The materials on offer are up to 100% bio-based.