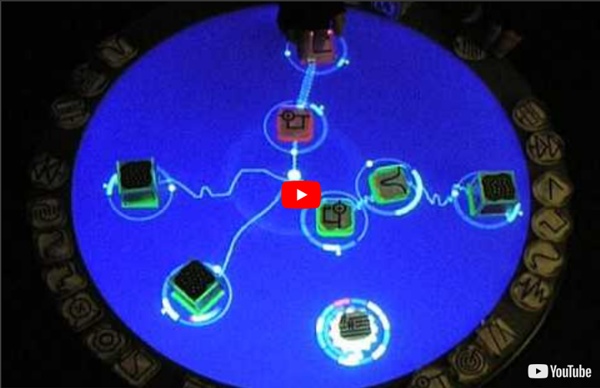 Musician James Hill Converts a Ukulele into an Entirely New Instrument Armed with a pair of humble wooden chopsticks, a .74 cent plastic comb, and a few other minor modifications, Canadian musician James Hill can convert his ukulele into a ridiculous beat machine. Hill mimics a wide range of rhythmic genres from techno to hip hop in this brief clip shot at a sold-out 2011 show at Don Quixote’s International Music Hall in Felton, California. There’s a lot of build-up and preparation, the music starts around 3:45. (via Devour) Bracelet - The Future is Now (A) These general website terms and conditions of use (hereinafter referred to as the “General Terms and Conditions”) set forth the terms and conditions applicable to the website (hereinafter referred to as the “Site”). (B) The Site is the exclusive property of CN2P (hereinafter referred to as the “Company”). (C) The purpose of the Site is to present the project developed by the Company (the “Project”) and to enable the collection of donations through the Site in order to finance the completion of the Company’s Project (the “Donations”). 2.1 Definitions

A New Acoustic Instrument That Creates Sounds like a Digital Synthesizer The Yabahar is a new acoustic instrument designed by Istanbul-based musician Görkem Şen that emits music right out of a retro sci-fi movie, a remarkable feat considering there isn’t a bit of electricity involved. The Yabahar can be played in a variety of different ways using mallets or with a bow, relying on a combination of two drum-like membranes, long springs, and a tall fretted neck to create music. Like any instrument, it’s capable of producing sounds that run the gamut from “beautiful music” to “noise.”

Coding Robin Open this page, allow it to access your webcam and see your face getting recognized by your browser using JavaScript and OpenCV, an "open source computer vision library". That's pretty cool! But recognizing faces in images is not something terribly new and exciting. Wouldn't it be great if we could tell OpenCV to recognize something of our choice, something that is not a face? Let's say... a banana? 'Ninja Run' May Be the Craziest VR Locomotion Technique Yet This is ‘Ninja Run VR’, and its yet another take on the ever present problem of user locomotion in VR experiences. But, as crazy as the concept looks, there may be some method to its madness. The question of how best to allow users of VR apps, games and experiences to move around a virtual space is still a hot topic among players and developers. Right now, those titles which require user-controlled movement through a space seem to be settling on some form of VR teleportation – i.e. the point and click approach.

DIY Hololens by FultonX I wanted to go ahead and develop Hololens apps. Here is Microsoft's live demo video: After experimenting and seeing a couple AR kickstarters, I figured out a way to develop comparable hardware... at least for prototyping. The HMD costs ~$10 and it projects any mobile phone image enlarged at 16" from the eye. Years – Bartholomäus Traubeck A record player that plays slices of wood. Year ring data is translated into music, 2011. Modified turntable, computer, vvvv, camera, acrylic glass, veneer, approx. 90x50x50 cm. A tree’s year rings are analysed for their strength, thickness and rate of growth.

Two Way Acrylic Mirror Cut To Size Delivery Rates Standard UK Mainland *For orders placed before 12pm. for Unity “Simplicity is the ultimate sophistication” — Leonardo da Vinci “Unity is a 3D application development tool that has been designed to let you focus on creating amazing 3D application.” MiddleVR is the perfect plugin to bring immersive capabilities to your Unity applications in a few minutes! MiddleVR adds the following capabilities to Unity: Scale one visualization with user-centric perspectiveSupport for 3D interaction devices such as 3D trackers (see full list on the right)S3D – Stereoscopy (active, passive)Multi-screens / multi-computers synchronization for higher-resolutions and impressive VR systems3D interactions: navigation, manipulationImmersive menusCustom graphical user interfaces (in HTML5)Display any webpage inside your virtual world

RGB and Gesture Sensor - APDS-9960 - SEN-12787 Description: This is the SparkFun RGB and Gesture Sensor, a small breakout board with a built in APDS-9960 sensor that offers ambient light and color measuring, proximity detection, and touchless gesture sensing. With this RGB and Gesture Sensor you will be able to control a computer, microcontroller, robot, and more with a simple swipe of your hand! This is, in fact, the same sensor that the Samsung Galaxy S5 uses and is probably one of the best gesture sensors on the market for the price. The APDS-9960 is a serious little piece of hardware with built in UV and IR blocking filters, four separate diodes sensitive to different directions, and an I2C compatible interface.

Wiring the APDS 9930 Ambient Light Sense / APDS 9960 RGB Gesture Sensor with Microcontroller This is the touch-less gestures sensor a HMI (Human Machine Interface) by swiping your hand over the sensor, which controls a computer, microcontroller, robots or home, automotive, industrial gesture switching or ambient light and color measuring and proximity detections. The Avago / Broadcom APDS 9930 / 9960 RGB and Gesture Sensor board break out pins so you can easily use it in variety of projects together with your SBC and MCU. The APDS-9930 APDS 9930 provides a digital ambient light sensing, IR LED and a complete proximity detection system in a single chip. The proximity function offers plug and play detection to 100mm without front glass. The proximity detection feature operates well from bright sunlight to dark area.