CSS Techniques I Wish I Knew When I Started Designing Websites - 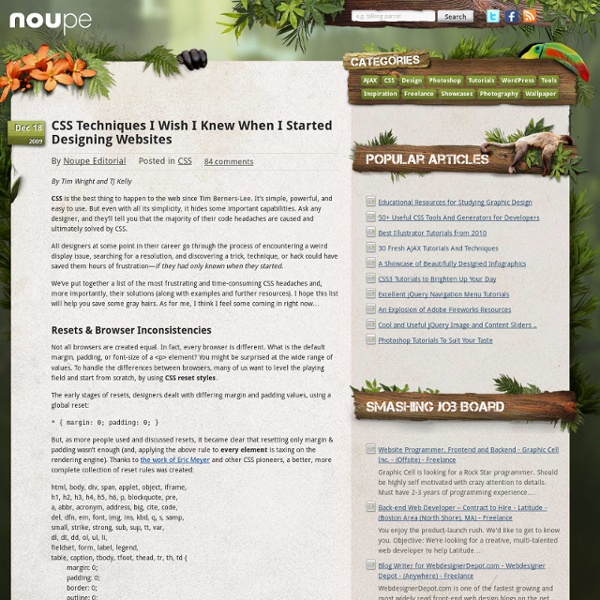 Dec 18 2009 By Tim Wright and TJ Kelly CSS is the best thing to happen to the web since Tim Berners-Lee. It’s simple, powerful, and easy to use. But even with all its simplicity, it hides some important capabilities. Ask any designer, and they’ll tell you that the majority of their code headaches are caused and ultimately solved by CSS. All designers at some point in their career go through the process of encountering a weird display issue, searching for a resolution, and discovering a trick, technique, or hack could have saved them hours of frustration—if they had only known when they started. We’ve put together a list of the most frustrating and time-consuming CSS headaches and, more importantly, their solutions (along with examples and further resources). Resets & Browser Inconsistencies Not all browsers are created equal. The early stages of resets, designers dealt with differing margin and padding values, using a global reset: inputbuttonhr Resources for Resets Extras Floats & Clearing <!

Design Windows Script Host dialog boxes for any occasion Spice up your script writing with Greg Shultz?s custom dialog box technique. Now, you can use IE and VBScript to create a reusable dialog box script. Get creative and start collecting that user input! Customizable dialog boxes give you freedom in developing interactive scripts for users. Data URIs explained One of the most frequently requested browser features in recent memory is data URI support. There’s been a fair amount written about data URIs recently: my colleague Stoyan Stefanov has written a couple of posts about data URIs, and my former colleague Hedger Wang also penned a post about how to use data URIs in IE. Surprisingly, there’s still a lot of misunderstanding and confusion about data URIs, what they are, how they work, and why you’d ever want to use one. URI, not URL URL is short for uniform resource locator, which is a combination of protocol (how to retrieve the data) andÂ the address at which a given resource exists. Every publicly-accessible resource, such as an image, JavaScript file, HTML file, or style sheet, has a URL that tells the browser from where to download the file.

How To Create A Secure Password It seems obvious, but passwords are our first line of defense against a growing army of nefarious hackers looking to steal our data, money or even identities. While many people know how serious the issue of cybersecurity is, many still use passwords that are remarkably bad. Compounding matters is the common practice of using the same password across multiple accounts, so a hacker who gains access to one account may be able to breach others. But protecting yourself is easy and there’s just no excuse for leaving your accounts vulnerable with bad passwords. WhoIsHostingThis.com is quickly becoming known for its informative infographics. The site recently taught us how to disappear online, it revealed the six organizations that secretly run the Internet and most importantly, it showed us how broad the issue of Internet censorship really is.

Unix - Environment An important Unix concept is the environment, which is defined by environment variables. Some are set by the system, others by you, yet others by the shell, or any program that loads another program. A variable is a character string to which we assign a value. GIT vs SVN Revision control, also known as version control, source control or software configuration management (SCM), is the management of changes to documents, programs, and other information stored as computer files. Version control systems provide the ability to track (and potentially revert) incremental changes to files, reporting them to a mailing list as they are made, and can be used concurrently by many developers. Distributed vs Centralized To better understand the comparison of this two Version Control tools, first we must understand what is the difference between Centralized and Distributed (Decentralized) version control systems. Distributed revision control (DRCS) takes a peer-to-peer approach, as opposed to the client-server approach of centralized systems.

60+ Responsive Navigation Bar Menu Tutorials, Examples, and Demos (CSS, jQuery, JavaScript) February 21, 2014 Lately, I have been really intrigued by responsive navigation bars. I did some extensive research and came up with a list of 60 plus responsive navigation bar tutorials, examples, and demos from all across the Internet. Here they are below: 1. Microsoft drops unlimited OneDrive storage after people use it for unlimited storage A little over a year ago, Microsoft announced that paid Office 365 Home and Personal subscribers would get, as part of their subscription, unlimited cloud storage on its OneDrive service. Yesterday, the company announced that it wasn't going to do that after all. It turns out that if you offer unlimited storage to people, a few of them actually take you at your word and trust that you are truly offering unlimited storage, and then they start using it. Explaining the backtracking, the new blog post complains that a small number of paying customers were using OneDrive to store backups of multiple PCs and large collections of movies and TV shows.

How to Create a Responsive Navigation One of the trickiest parts to be responsified on a website is “the Navigation”, this part is really important for the website accessibility, as this is one of the ways visitors jump over the web pages. There are actually many ways to create responsive web site navigation and even some jQuery plugins are available to do it in a second. However, rather than applying an instant solution, in this post, we are going to walk you through on how to build a simple navigation from the ground and using the CSS3 media queries and a little jQuery to display it in a small screen size like the smartphones properly. So, let’s just get started. First of all, let’s add the meta viewport inside the head tag. This meta viewport tag is required for our page to scale properly inside any screen size, particularly in the mobile viewport.

Paul Ford: What is Code? A computer is a clock with benefits. They all work the same, doing second-grade math, one step at a time: Tick, take a number and put it in box one. Tick, take another number, put it in box two. Replacing MyOpenID In September Janrain announced that they were shutting down MyOpenID. Janrain was always one of the biggest OpenID proponents, so them calling it quits is quite significant. For me, this was definitely the last nail in the coffin. MyOpenID will go down February 1st, 2014. Too bad really, because I really liked OpenID from a conceptual perspective, and this blog tells me I’ve been a fan since at least 2006. I predicted in 2009 (apparently) that it was already going down a route of over-engineering, even though the scope of the OpenID specifications was rather minimal compared to how things are looking right now.

Fielding Dissertation: CHAPTER 5: Representational State Transfer (REST) [Top] [Prev] [Next] This chapter introduces and elaborates the Representational State Transfer (REST) architectural style for distributed hypermedia systems, describing the software engineering principles guiding REST and the interaction constraints chosen to retain those principles, while contrasting them to the constraints of other architectural styles. REST is a hybrid style derived from several of the network-based architectural styles described in Chapter 3 and combined with additional constraints that define a uniform connector interface.

The Best Project Management Software: 50 Tools for Team Task Management To-do lists alone aren't enough to send a man to the moon, build a pyramid, and create the device you're reading on right now. Humanity's greatest achievements—and your next project—need a workflow, a way to break a project up into achievable chunks, make sure each part is completed in a consistent manner, and ship the finished project on time. That's what project management apps are for.

A Simple Device Diagram for Responsive Design Planning Updated for 2015! Check out Analytics-driven responsive web design planning At Metal Toad we're big fans of responsive design, but a common snag in the responsive planning process comes when choosing what device widths to design to. Just yesterday we had a big internal debate over what the best widths to design to are for 3 layout sites, 4 layout sites, etc. I'll get to our conclusions below, but another important distinction to call out is that for each layout there are two things to consider: what the pixel width range for a specific layout should be, and what pixel width the designer should create the PSDs at.