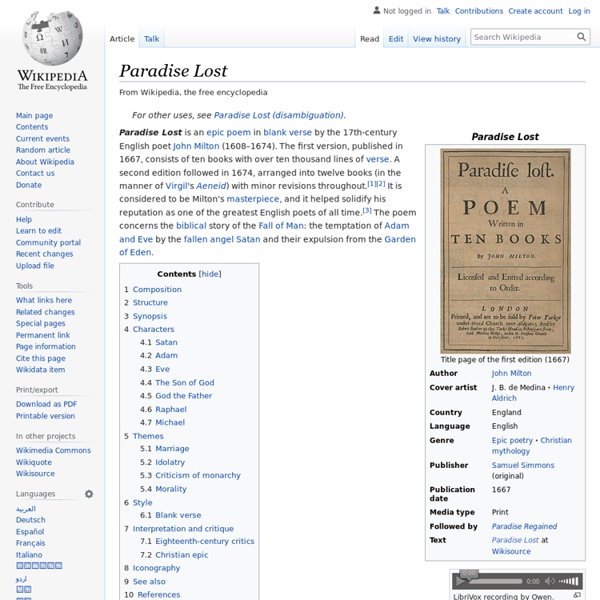 Epic poem by John Milton, concerning the biblical story of the Fall of Man The poem concerns the biblical story of the Fall of Man: the temptation of Adam and Eve by the fallen angel Satan and their expulsion from the Garden of Eden. Milton's purpose, stated in Book I, is to "justify the ways of God to men Composition[edit] Gustave Doré, The Heavenly Hosts, c. 1866, illustration to Paradise Lost. In his introduction to the Penguin edition of Paradise Lost, the Milton scholar John Leonard notes, "John Milton was nearly sixty when he published Paradise Lost in 1667. Leonard also notes that Milton "did not at first plan to write a biblical epic." Having gone totally blind in 1652, Milton wrote Paradise Lost entirely through dictation with the help of amanuenses and friends. Structure[edit] The poem is divided into "books" (ten originally, twelve in Milton's revised edition of 1674). Milton used a number of acrostics in the poem. Synopsis[edit] Characters[edit] Satan[edit] Adam[edit] Eve[edit] Related:  Literature • 1

Kardashev scale The Kardashev scale is a method of measuring a civilization's level of technological advancement, based on the amount of energy a civilization is able to utilize. The scale has three designated categories called Type I, II, and III. A Type I civilization uses all available resources on its home planet, Type II harnesses all the energy of its star, and Type III of its galaxy. The scale is only hypothetical, but it puts energy consumption in a cosmic perspective. It was first proposed in 1964 by the Russian astronomer Nikolai Kardashev (Kardashyov). Various extensions of the scale have been proposed since, from a wider range of power levels (types 0, IV and V) to the use of metrics other than pure power. Definition[edit] Type I "Technological level close to the level presently attained on earth, with energy consumption at ≈4×1019 erg/sec (4 × 1012 watts) Type II Type III "A civilization in possession of energy on the scale of its own galaxy, with energy consumption at ≈4×1044 erg/sec

Solomon According to the Talmud, Solomon is one of the 48 prophets.[4] In the Qur'an, he is considered a major prophet, and Muslims generally refer to him by the Arabic variant Sulayman, son of David. Biblical account[edit] Succession[edit] Cornelis de Vos, The Anointing of Solomon . According to 1 Kings 1:39, Solomon was anointed by Zadok. According to the biblical First Book of Kings, when David was old, "he could not get warm Adonijah asked to marry Abishag the Shunammite, but Solomon disallowed that, although Bathsheba now pleaded on Adonijah's behalf. Wisdom[edit] Artist's depiction of Solomon's court (Ingobertus, c. 880) One of the qualities most ascribed to Solomon is his wisdom. "And the king went to Gibeon to sacrifice there; for that was the great high place: a thousand burnt offerings did Solomon offer upon that altar. The judgment of Solomon (painting on ceramic), Castelli, IT: Lille Museum of Fine Arts, 18th century . Solomon is also noted as one of many authors of Wisdom literature.

Faust Protagonist of a classic German legend Faust is the protagonist of a classic German legend, based on the historical Johann Georg Faust (c. 1480–1540). The erudite Faust is highly successful yet dissatisfied with his life, which leads him to make a pact with the Devil at a crossroads, exchanging his soul for unlimited knowledge and worldly pleasures. The Faust legend has been the basis for many literary, artistic, cinematic, and musical works that have reinterpreted it through the ages. "Faust" and the adjective "Faustian" imply a situation in which an ambitious person surrenders moral integrity in order to achieve power and success for a limited term.[1][2] Summary of the story[edit] Faust is bored and depressed with his life as a scholar. During the term of the bargain, Faust makes use of Mephistopheles in various ways. Sources[edit] The character in Polish folklore named Pan Twardowski presents similarities with Faust. Das Wagnerbuch (1593)Das Widmann'sche Faustbuch (1599)Dr. Notes[edit]

Garden of Eden The Garden of Eden (Hebrew גַּן עֵדֶן, Gan ʿEḏen) is the biblical "garden of God", described most notably in the Book of Genesis chapters 2 and 3, and also in the Book of Ezekiel.[2] The "garden of God", not called Eden, is mentioned in Genesis 14, and the "trees of the garden" are mentioned in Ezekiel 31. The Book of Zechariah and the Book of Psalms also refer to trees and water in relation to the temple without explicitly mentioning Eden.[3] Traditionally, the favoured derivation of the name "Eden" was from the Akkadian edinnu, derived from a Sumerian word meaning "plain" or "steppe". Biblical narratives[edit] Eden in Genesis[edit] The second part of the Genesis creation narrative, in Genesis 2:4–3:24, opens with "the LORD God"(v.7) creating the first man (Adam), whom he placed in a garden that he planted "eastward in Eden". The Lord God made all kinds of trees grow out of the ground—trees that were pleasing to the eye and good for food. Eden in Ezekiel[edit] Proposed locations[edit]

Swadharma There is no proper equivalent in English for the Sanskrit term 'Dharma'. It is generally rendered as 'duty', 'righteousness'. Any action that is best calculated to bring Sreyas (liberation) and Abhyudaya (exaltation) is Dharma. God, religion and Dharma are inseparable. The mark of Dharma is Achara (good conduct). Dharma tops the list of the four Purusharthas, viz., Dharma, Artha, Kama and Moksha. "The Brahmana was Brahma's mouth; the Rajanya was made His two arms; His two thighs the Vaishya; the Sudra was born of His two feet." Courage, generosity, vigour, prowess, splendour, firmness, dexterity, not fleeing from battle, the nature of a ruler, protection of the people, gifts, doing sacrifices and study of the Vedas are the duties of a Kshatriya born of his own nature. Ploughing, protection of cattle, trade, charity, doing sacrifice, study of the Vedas, engaging in commerce, finance and agriculture are the duties of a Vaishya born of his own nature. There is another important point.

Seven ways to control the Galaxy with self-replicating probes So, you want to take over the Galaxy. A good career move. Ultimately, you're hoping to communicate with extraterrestrials, colonize entire sets of star clusters, and eventually lord it over the entire Milky Way. You've got the motive, but what about the means? Well, forget about generation ships, suspended animation or ringworlds – the best way for you to explore, colonize and ultimately rule the Milky Way will be through the use of self-replicating robotic spacecraft – what are sometimes referred to as von Neumann probes. Von Neumann's idea Back in late 1940’s the brilliant mathematician John Von Neumann wondered if it might be possible to design a non-biological system that could replicate itself. The strength of Von Neumann's idea lies in the brute efficiency of exponential growth. In order to work, however, a von Neumann spacecraft would have to be put together using advanced nanotechnology and artificial intelligence -- technologies that we have yet to develop. 1. 1. 2. 3. 4. 5. 6.

Queen of Sheba The Queen of Sheba (Hebrew: מלכת שבא‎, Malkaṯ Šəḇâ in Biblical Hebrew; Malkat Sh'va in Modern Hebrew; Ge'ez: ንግሥተ ሳባ, Nigiste Saba (Nəgəstä Saba); Arabic: ملكة سبأ‎, Malikat Sabaʾ) was a monarch of the ancient kingdom of Sheba and is referred to in Yemenite and Ethiopian history, the Bible, the Qur'an, Yoruba customary tradition, and Josephus. She is widely assumed to have been a queen regnant, but, since there is no historical proof of this, she may have been a queen consort.[9] The location of her kingdom is uncertain. Wallis Budge believes it to be Ethiopia[10] while Islamic tradition says Yemen. More modern scholarship suggests it was the South Arabian kingdom of Saba.[11] Diverse references[edit] The queen of Sheba has been called a variety of names by different peoples in different times. In the Ethiopian Book of Aksum, she is described as establishing a new capital city at Azeba, while the Kebra Negast refers to her building a capital at Debra Makeda, or "Mount Makeda". Story[edit]

Henrik Ibsen Norwegian playwright and theatre director Several of his later dramas were considered scandalous to many of his era, when European theatre was expected to model strict morals of family life and propriety. Ibsen's later work examined the realities that lay behind the facades, revealing much that was disquieting to a number of his contemporaries. He had a critical eye and conducted a free inquiry into the conditions of life and issues of morality. His early poetic and cinematic play Peer Gynt, however, also has strong surreal elements.[6] Ibsen is often ranked as one of the most distinguished playwrights in the European tradition.[7] Richard Hornby describes him as "a profound poetic dramatist—the best since Shakespeare".[8] He is widely regarded as the foremost playwright of the nineteenth century.[7][9] He influenced other playwrights and novelists such as George Bernard Shaw, Oscar Wilde, Arthur Miller, James Joyce, Eugene O'Neill, and Miroslav Krleža. Early life and family[edit]

Gospel of Thomas The Coptic-Language text, the second of seven contained in what modern-day scholars have designated as Codex II, is composed of 114 sayings attributed to Jesus.[2] Almost half of these sayings resemble those found in the Canonical Gospels, while it is speculated that the other sayings were added from Gnostic tradition.[3] Its place of origin may have been Syria, where Thomasine traditions were strong.[4] The introduction states: "These are the hidden words that the living Jesus spoke and Didymos Judas Thomas wrote them down."[5] Didymus (Greek) and Thomas (Aramaic) both mean "twin". Some critical scholars suspect that this reference to the Apostle Thomas is false, and that therefore the true author is unknown.[6] The Gospel of Thomas is very different in tone and structure from other New Testament apocrypha and the four Canonical Gospels. Bishop Eusebius included it among a group of books that he believed to be not only spurious, but "the fictions of heretics".[13] P. P. Attestation[edit]