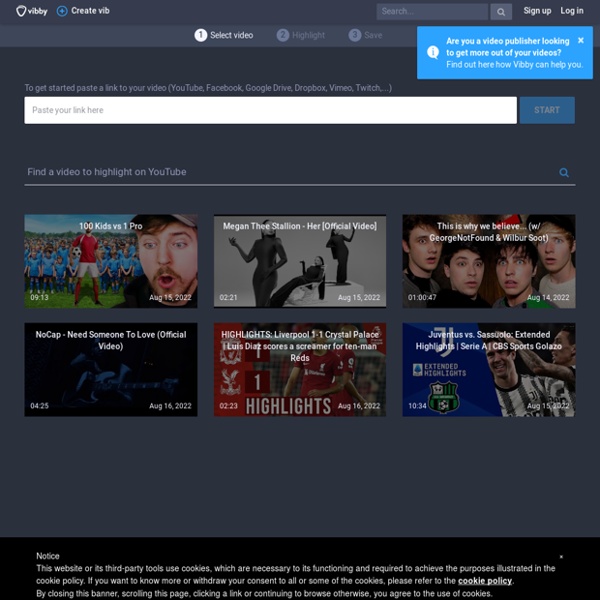 instaGrok Fossil records indicate that this huge fish, one of the first large jawed ___s in the ocean, was an aggressive predator. [source]australiaairyearvertebrate The pelvic fins of the male are modified for depositing sperm in the ___ of the female. [source]reproductive tractorganismarchaeopteryxskeleton Although the land vertebrates live in such diverse ___s the have the same basic needs. How to Create Video Quizzes on Vizia Last week I shared some information about a new video quiz creation tool called Vizia. Since then I've received some questions about how it actually works. To address those questions I created the short video that is embedded below. As mentioned in the video, all of the responses to your questions are collected in a spreadsheet that you can download and or open in Google Sheets.

Best of 2013 So Far...Create Interactive Videos on WireWax We're half-way through 2013. Like I've done in years past, this week I'll be featuring some of the best new tech tools of 2013 as well as some of the most popular posts of the year. wireWax is a service that takes the concept of YouTube annotations and makes it much better. On wireWax you can build interactive tags into your videos. Handbrake ( logiciel open source, multiplateforme, gratuit) Download Mirrors Please take note that HandBrake.fr is the only official place where HandBrake can be downloaded from. There are many unofficial mirrors of HandBrake and while most of them offer legit versions of HandBrake, there are a few that don't. You can verify the integrity and authenticity of your download with the details below. GPG - Verify the authenticity of your download

How to Access and Use the Blurring Tools in YouTube's Video Editor This is the time of year for winter concerts and plays at schools. If the ones at your are anything like the one I attended last week, there will be plenty of parents recording the performances. And I'd guess that you or someone from your school will record it too. A Collection of Project Based Learning End Products I’m always on the lookout for products created by students through project based learning experiences. I'd rather see what students create to express their answer to a driving question than just read a summary of the project. I can find loads project ideas and descriptions online, but it’s much harder to find quality end products by students. I've spent quite some time searching all over the internet for end products. I think these samples can be used as inspiration for your own projects. And, critiquing these samples can help students think of ways to make their own productions better.

Add Your Voice to Diagrams By Creating TinyTap Sound Boards Parts of this post originally appeared on my other blog, iPadApps4School.comTinyTap is a great iPad app for developing your own educational games. I've been a big supporter of the app since it launched a couple of years ago. TinyTap has always been targeted toward the K-3 crowd, but it can certainly be used with older students too. The Five Best Tools for Creating Videos Without Installing Software Over the years I've published some lists and reviews of free tools for creating videos online. Quite a few of those tools have been for creating simple videos that are really just automated, audio slideshows. See Animoto for an example of this. There's nothing inherently wrong with having your students use those tools, but at some point you will want to take your video projects to the next level. These are the five tools that I recommend for creating and editing videos without installing any special software. Pixorial is the online video creation tool that I hear teachers talking about a lot lately.

Kapwing The Kapwing subtitler is the web's best tool for adding subtitles to your video with no watermark. Research shows that subtitled videos on social media get significantly higher engagement than videos without subtitles. This editor allows you to burn subtitles into video directly, so that the subtitles will not be lost no matter what platform the video gets shared to. Kapwing also has an AI-powered auto-generate feature for subtitles. Create subtitles automatically, then edit the auto-generated subtitles so that they are perfectly matched to the audio in your video.

How to Record Videos in Canva - New Feature! Earlier this week Canva introduced a couple of new features for adding media into your slides and graphics. One of those features is a new video recording option. You can now record using your webcam and instantly insert that video into your slides and graphics. The video can be cropped in Canva. You can also adjust the transparency, orientation, and layering position of your video within your slides and graphics. Why are there so many insects? - Murry Gans As successful as insects are, they evolved to live on land – not in the oceans. This gives us another way to see just how many insects there are on earth, so grab a scientific calculator. (If you need any help ask a math or science teacher - you will make their day!) Here’s a question for you: The total land area of Earth is approximately 149 million square kilometers (1.49 x 108 km2). If there are 10 quintillion insects on our planet, on average how many could be found in a 1 meter by 1 meter box? Here is a little help for those of you not very familiar with the metric system.