When Your Calling Seems Vague and Unclear, You’re on the Right Track 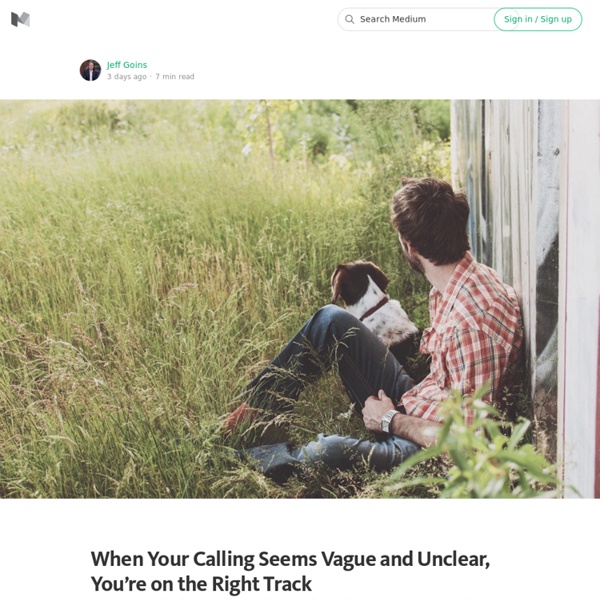 When Your Calling Seems Vague and Unclear, You’re on the Right Track Most people don’t know what to do with their lives. And that’s okay. “We see in order to move; we move in order to see.” —William Gibson These days, there’s a lot of talk about discovering your dream. More and more people are unwilling to exchange their ideals for a paycheck. I’m sure there are people who know exactly what they were born to do, who have had a vision of their life since they were six years old. So where do you go from there, if all you’ve got is an itch, a vague premonition of an un-lived life? That was the question I sought to answer in my book, The Art of Work. Lesson 1: Don’t wait for clarity “I have never had clarity. The other day, I was on a call with a young woman who was passionate about getting involved in social work — she just didn’t know where to start. As the discussion continued, she confessed that she didn’t know what her calling was. Takeaway: Clarity comes with action. So where do you start? Related:  self - development • Life • Career

People Who Achieve Their Goals Do These 5 Things When Angela Duckworth was 27, she left her high-pressure management-consulting job for an even tougher gig: teaching seventh-grade math at a New York City public school. Duckworth quickly learned it wasn’t smarts that determined whether her students accomplished their goals and got good grades—not by a long shot. “I was convinced every one of my students could learn the material if they worked long and hard enough,” she says in her popular TED talk. After a few years of teaching, Duckworth found herself asking the question, “What if doing well in school and in life depends on much more than your ability to learn quickly and easily?” “Grit is stamina. Even the least seasoned of runners knows that the key to making it through a marathon is pacing yourself: not pushing too hard or too fast and exhausting your energy while also not backing down when it gets tough. Have a Growth Mindset “They challenge themselves and grow.” Set Meaningful Goals Build Accountability into Your Life

The Authentic Person's Guide To Self-Branding If you use the Internet, you have a brand. Whether you like it or not, people are Googling you and their impression of you is shaped by the content they find: your LinkedIn profile, your Facebook page, your public tweets, that random op-ed you wrote for your college paper. And yet many people are uncomfortable with the idea of cultivating a personal brand. "When people think of self-branding, they immediately think of people in the entertainment industry who are in the business of shameless self-promotion," says Selena Soo, founder of S2 Groupe, a personal branding consultancy. But Soo insists that managing your public persona won't make an over-the-top Donald Trump or Kim Kardashian out of you. Soo argues that self-branding is not just about you, but also about the people you are trying to help through your work. Soo has noticed that women in particular tend to struggle with not wanting to come off as too pushy when crafting their personal brand and getting others to notice it.

lifehack Books have the power to help people realize their dreams and maximize their potential. A good reading experience can be life-changing. Here are 10 books recommended by global entrepreneurs. 1. “It is those who concentrate on but one thing at a time who advance in this world.” – Og Mandino This book topped number one on Wall Street, New York Times and USA Today, so it is bound to be a good read. The book is described as an “excellent read for not only your business but any goal you are trying to achieve in life”. With the amount of distractions in this day and age from emails, text messages, and phone calls, it is hard to not get side tracked from what does matter. As the book quotes “Extraordinary results require focused attention and time. Figure out what the one thing is in your life that you want and achieve it. 2. “Believe you can succeed and you will” If you want to do more and achieve more, then you need to learn how to think properly. 3. 4. 5. 6. 7. 8. 9. 10. Set a Goal For Yourself

3 Job Interview Questions to Avoid Asking When I was a recruiter, I was asked a lot of smart questions that made me say, “Wow, this candidate is on top of her game.” But I also heard a lot that made me wonder who the person had taken interview advice from—or if that person had ever sought out help at all. The truth is that while hiring managers expect you to come with questions, there are plenty of topics you shouldn’t ever bring up. For starters, here are a few that might sound exciting to you, but won’t endear you to the interviewer. 1. It’s only natural to want to work with people you’d have a drink with after work. What to Ask Instead Rather than asking to hear about how hard the team parties, try something like this: “I’d love to hear more about how the team works together here, how would you define the company culture?” 2. OK, you might not be as blunt as the wording here, but back in my recruiting days, you’d be amazed at the lengths people would go to get me to say, “You’re amazing!” 10,000+ openings right this way 3.

How to Make Yourself Work When You Just Don’t Want To There’s that project you’ve left on the backburner – the one with the deadline that’s growing uncomfortably near. And there’s the client whose phone call you really should return – the one that does nothing but complain and eat up your valuable time. Wait, weren’t you going to try to go to the gym more often this year? Can you imagine how much less guilt, stress, and frustration you would feel if you could somehow just make yourself do the things you don’t want to do when you are actually supposed to do them? Not to mention how much happier and more effective you would be? The good news (and its very good news) is that you can get better about not putting things off, if you use the right strategy. Reason #1 You are putting something off because you are afraid you will screw it up. Solution: Adopt a “prevention focus.” There are two ways to look at any task. What you need is a way of looking at what you need to do that isn’t undermined by doubt – ideally, one that thrives on it.

Mind Wandering: A New Personal Intelligence Perspective | Beautiful Minds Some recent studies (Baird et al., 2011, 2012; Smallwood et al., 2011b; Immordino-Yang etal., 2012) have provided glimpses of how mind wandering or “constructive, internal reflection” (Immordino-Yangetal.,2012) might benefit the individual, but we are just beginning to scratch the surface. To gain a fuller understanding of the benefits of positive constructive daydreaming we need to apply tools and metrics (as in Klinger et al., 1980; Hoelscher et al., 1981; Nikles et al., 1998; Cox and Klinger, 2011; Klinger and Cox, 2011) that enable us identify the personally meaningful goals, aspirations, and dreams of individuals and determine how mind wandering supports or undermines those goals. Given the highly personal nature of mind wandering, we need a new focus and new metrics. Intelligence theories provide an interesting parallel. Executive Attention Network To help correct this imbalance in the literature, I recently proposed the Theory of Personal Intelligence. Default Mode Network

In Praise of Idleness By Bertrand Russell Like most of my generation, I was brought up on the saying: 'Satan finds some mischief for idle hands to do.' Being a highly virtuous child, I believed all that I was told, and acquired a conscience which has kept me working hard down to the present moment. But although my conscience has controlled my actions, my opinions have undergone a revolution. Before advancing my own arguments for laziness, I must dispose of one which I cannot accept. One of the commonest things to do with savings is to lend them to some Government. But, I shall be told, the case is quite different when savings are invested in industrial enterprises. All this is only preliminary. First of all: what is work? Throughout Europe, though not in America, there is a third class of men, more respected than either of the classes of workers. Modern technique has made it possible to diminish enormously the amount of labor required to secure the necessaries of life for everyone.

LPT: If you're nervous about asking your boss/potential employer about raises/salary, don't think of them as authority figures you hope will be more generous, think of them as customers who are buying your time. : LifeProTips