The Humble Mobile Bundle (pay what you want and help charity) 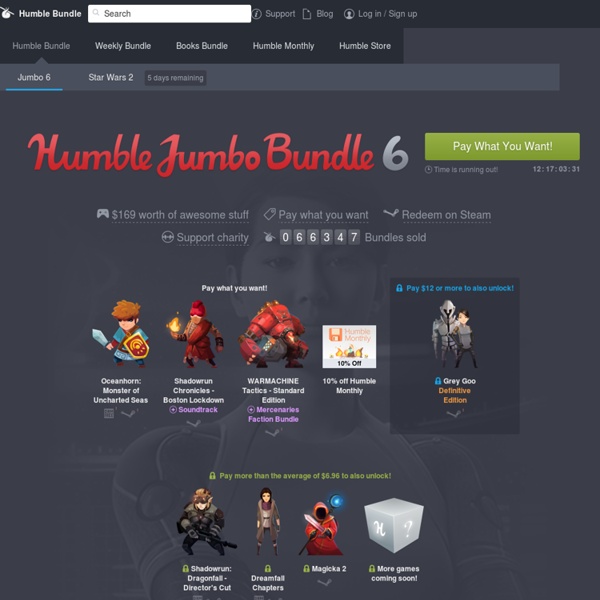 Open Source RTS Game 'Widelands' Updated Widelands is an open source real-time strategy game inspired by Settlers II. In this game, you start out on a small piece of land with nothing more than a few of useful resources. Using those, you can build yourself an empire with many thousands of inhabitants. On your way towards this goal, you will have to build up an economic infrastructure, explore the lands around you and face enemies who are trying to rule the world just like you do. Game FeaturesFour Worlds (Tile Sets) (Greenland, Winterland, Blackland and Desert)Three Tribes (Barbarians, Imperials and Atlanteans)Several playable single player (tutorial) missionsMaps for single and multiplayer modeSave and load of single and multiplayer gamesAbility to build a settlement from scratchMilitary and warfare (Attacking, Training, defending, conquering of military buildings)A map editor, to build your own maps and campaigns

6 Best Air Fryer Deals for Black Friday 2020 Assorted retailers If you've somehow made it this long into 2020 without what's arguably the hottest small kitchen appliance of the year because you were waiting for Black Friday deals to come around, here's proof that good things come to those who wait. Black Friday this year is stacked with air fryer deals. For the uninitiated (perhaps you're reading this because you wanted to learn once and for all what the hype is about), air fryers are small ovens with a highly concentrated heat source and a fan that moves the air around to crisp up vegetables, wings, fries and more with zero or minimal oil. Considering how easy these are to use, plus the fact that some models out there have upwards of 6-in-1 capabilities, it's no wonder they've become so popular. Ahead, the best air fryer deals to scoop up this Black Friday on some of our all-time favorite models.

South Dakota Law Linking Abortion, Suicide Upheld In Court A federal appeals court upheld a South Dakota law on Tuesday that requires doctors to tell women seeking abortions that the procedure causes an increased risk of suicide. The 8th Circuit Court of Appeals ruled that the provision is constitutional by a vote of 7-4. The seven judges in the majority were all appointed by former President George W. Bush. The abortion/suicide provision is part of a larger bill the South Dakota legislature passed in March 2005. Planned Parenthood Minnesota, South Dakota, and North Dakota challenged the law in June 2005, arguing that it violates free speech rights by forcing doctors to tell women information that is not based on reliable research.

Adventure Game Studio With the last linux port being in 2007, and the linux port being officially discontinued in december 2008, you probably thought it dead. Well, it ain't, since I took it over a little while ago. The new website I took off where Shawn stopped: AGS 2.72 - and took it a little further... AGS Linux Engine 2.72 - "The undead Pinguin rises" edition How to Buy Your Next Watch The Six Steps to Vintage-Watch Nirvana “People think that vintage watches are harder to get or more expensive than contemporary watches,” says Jacek Kozubek, a vintage dealer in San Francisco. Which is fair! Paul Newman's Rolex sold for nearly $18 million in 2017. “But in some cases, they're actually easier.”

Why Doesn’t Katy Perry Want To Be Called A Feminist? "Woman of the Year" honoree, singer Katy Perry, attends Billboard's "Women in Music 2012" luncheon at Capitale on Friday Nov. 30, 2012 in New York. (Evan Agostini/Invision, AP) On Friday night, singer Katy Perry was named woman of the year at the Billboard Women in Music Awards. She accepted it graciously saying, “I’m not a feminist, but I do believe in the strength of women.” Millennial women often bewilder their feminist elders. I’m not supposed to say that out loud — it’s thought to be divisive — but it’s true. Game Boy Color The Game Boy Color (ゲームボーイカラー, Gēmu Bōi Karā?), referred as GBC, is a handheld game console manufactured by Nintendo. it was released on October 21, 1998 in Japan and was released in November of the same year in International markets. It is the successor of the Game Boy Pocket.