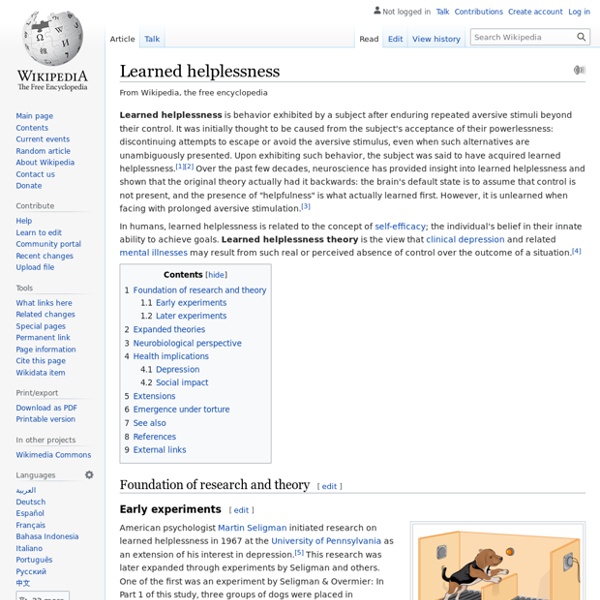 Learned helplessness is behavior typical of a human or non-human animal and occurs where an animal endures repeatedly painful or otherwise aversive stimuli which it is unable to escape or avoid. After such experience, the organism often fails to learn or accept "escape" or "avoidance" in new situations where such behavior would likely be effective. In other words, the organism learned that it is helpless in situations where there is a presence of aversive stimuli and has accepted that it has lost control, and thus gives up trying. Such an organism is said to have acquired learned helplessness.[1][2] Learned helplessness theory is the view that clinical depression and related mental illnesses may result from such real or perceived absence of control over the outcome of a situation. [3] Foundation of research and theory[edit] Early key experiments[edit] In Part 2 of the experiment the same three groups of dogs were tested in a shuttle-box apparatus. Later experiments[edit] Depression[edit] Related:  Psychology • Development of Cognitive Behavioral theory • Wikipages

Serotonin and Depression: 9 Questions and Answers 1. What is serotonin? Serotonin acts as a neurotransmitter, a type of chemical that helps relay signals from one area of the brain to another. Although serotonin is manufactured in the brain, where it performs its primary functions, some 90% of our serotonin supply is found in the digestive tract and in blood platelets. 2. Serotonin is made via a unique biochemical conversion process. 3. As a neurotransmitter, serotonin helps to relay messages from one area of the brain to another. In terms of our body function, serotonin can also affect the functioning of our cardiovascular system, muscles, and various elements in the endocrine system. 4. There are many researchers who believe that an imbalance in serotonin levels may influence mood in a way that leads to depression. One theory about how depression develops centers on the regeneration of brain cells -- a process that some believe is mediated by serotonin, and ongoing throughout our lives.

Positive psychology To Martin Seligman, psychology (particularly its positive branch) can investigate and promote realistic ways of fostering more joy in individuals and communities. Positive psychology is a recent branch of psychology whose purpose was summed up in 1998 by Martin Seligman and Mihaly Csikszentmihalyi: "We believe that a psychology of positive human functioning will arise, which achieves a scientific understanding and effective interventions to build thriving individuals, families, and communities."[1] Positive psychologists seek "to find and nurture genius and talent" and "to make normal life more fulfilling",[2] rather than merely treating mental illness. Positive psychology is primarily concerned with using the psychological theory, research and intervention techniques to understand the positive, adaptive, creative and emotionally fulfilling aspects of human behavior.[3] Overview[edit] Research from this branch of psychology has seen various practical applications. The goal[edit]

Bahá'í Faith - Wikipedia The Bahá'í Faith (Persian: بهائی‎‎ Bahā'i) is a religion teaching the essential worth of all religions, and the unity and equality of all people. Established by Bahá'u'lláh in 1863, it initially grew in the Middle East and now has between 5 and 7 million adherents, known as Bahá'ís, spread out into most of the world's countries and territories, with the highest concentration in Iran.[3] The religion was born in Iran, where it has faced ongoing persecutions since its inception.[4] It grew from the mid-19th century Bábí religion, whose founder taught that God would soon send a prophet in the manner of Jesus or Muhammad.[5] In 1863, after being banished from his native Iran, Bahá'u'lláh announced that he was this prophet. He was further exiled, spending over a decade in the prison city of Akka in the Ottoman province of Syria, in what is now Israel. Etymology[edit] Beliefs[edit] God[edit] Religion[edit] Human beings[edit] Summary[edit] Social principles[edit] Covenant[edit] Canonical texts[edit]

Martin Seligman Martin E. P. "Marty" Seligman (born August 12, 1942) is an American psychologist, educator, and author of self-help books. His theory of learned helplessness is popular among scientific and clinical psychologists.[1] According to Haggbloom et al.' Seligman has written about positive psychology topics such as The Optimistic Child, Child's Play, Learned Optimism, Authentic Happiness, and Flourish. Early life and education[edit] Seligman was born in Albany, New York. Learned helplessness[edit] Seligman's foundational experiments and theory of "learned helplessness" began at University of Pennsylvania in 1967, as an extension of his interest in depression. According to author Jane Mayer,[9] Seligman gave a talk at the Navy SERE school in San Diego in 2002, which he said was a three-hour talk on helping US soldiers to resist torture, based on his understanding of learned helplessness. Positive psychology[edit] PERMA[edit] MAPP program[edit] Personal life[edit] Publications[edit] References[edit]

Watership Down - Wikipedia Watership Down is a classic adventure novel, written by English author Richard Adams, published by Rex Collings Ltd of London in 1972. Set in southern England, the story features a small group of rabbits. Although they live in their natural environment, they are anthropomorphised, possessing their own culture, language, proverbs, poetry, and mythology. Origin and publication history[edit] The title refers to the rabbits' destination, Watership Down, a hill in the north of Hampshire, England, near the area where Adams grew up. —Dedication, Watership Down Adams's descriptions of wild rabbit behaviour were based on The Private Life of the Rabbit (1964), by British naturalist Ronald Lockley.[12][13] The two later became friends, embarking on an Antarctic tour that became the subject of a co-authored book, Voyage Through the Antarctic (A. Plot summary[edit] Eventually they meet a rabbit named Cowslip, who invites them to join his warren. Nuthanger Farm, Hampshire, England, in 2004. 'Oh, Hazel!

DrugFacts: Treatment Approaches for Drug Addiction | National Institute on Drug Abuse (NIDA) NOTE: This fact sheet discusses research findings on effective treatment approaches for drug abuse and addiction. If you’re seeking treatment, you can call the Substance Abuse and Mental Health Services Administration's (SAMHSA's) National Helpline at 1-800-662-HELP (1-800-662-4357) or go to www.findtreatment.samhsa.gov for information on hotlines, counseling services, or treatment options in your state. What is drug addiction? Drug addiction is a chronic disease characterized by compulsive, or uncontrollable, drug seeking and use despite harmful consequences and changes in the brain, which can be long lasting. These changes in the brain can lead to the harmful behaviors seen in people who use drugs. Drug addiction is also a relapsing disease. The path to drug addiction begins with the voluntary act of taking drugs. Addiction is a disease that affects both the brain and behavior. Can drug addiction be treated? Yes, but it’s not simple. Principles of Effective Treatment Withdrawal.

Donald Meichenbaum Biographie[Bearbeiten] Er wurde von nordamerikanischen Therapeuten 1999 in einer Umfrage des American „Psychologist“ zu einem der zehn einflussreichsten Psychotherapeuten des Jahrhunderts gewählt. Er gilt als einer der meist zitierten psychologischen Forscher an kanadischen Universitäten. Meichenbaum ist emeritierter Professor an der University of Waterloo ist aber weiterhin als klinischer Psychologe tätig. Werke (Auswahl)[Bearbeiten] 2003: Intervention bei Stress. Literatur[Bearbeiten] Wilken, Beate (1998): Methoden der kognitiven Umstrukturierung. Weblinks[Bearbeiten] King Lear - Wikipedia "King Lear and the Fool in the Storm" by William Dyce (1806–1864) King Lear is a tragedy written by William Shakespeare. It depicts the gradual descent into madness of the title character, after he disposes of his kingdom giving bequests to two of his three daughters based on their flattery of him, bringing tragic consequences for all. Derived from the legend of Leir of Britain, a mythological pre-Roman Celtic king, the play has been widely adapted for the stage and motion pictures, with the title role coveted by many of the world's most accomplished actors. The first attribution to Shakespeare of this play, originally drafted in 1605 or 1606 at the latest with its first known performance on St. After the English Restoration, the play was often revised with a happy, non-tragic ending for audiences who disliked its dark and depressing tone, but since the 19th century Shakespeare's original version has been regarded as one of his supreme achievements. Characters[edit] Synopsis[edit] R.

Miura fold - Wikipedia Crease pattern for a Miura fold. The parallelograms of this example have 84° and 96° angles. The Miura fold (ミウラ折り, Miura-ori?) The Miura fold is a form of rigid origami, meaning that the fold can be carried out by a continuous motion in which, at each step, each parallelogram is completely flat. The 1996 Space Flyer Unit deployed the 2D Array from a Miura folded configuration.[5] The inflatable membrane structure of the SPROUT satellite is carried into space in the Miura-folded state, and then deployed using inflatable tubes themselves carried into space in the Octagon-folded state.[6][7] Other potential applications of this fold include surgical devices such as stents and flat-foldable furniture.[8] Video displaying the folding and unfolding of a Miura-creased material References[edit] External links[edit] Origami science