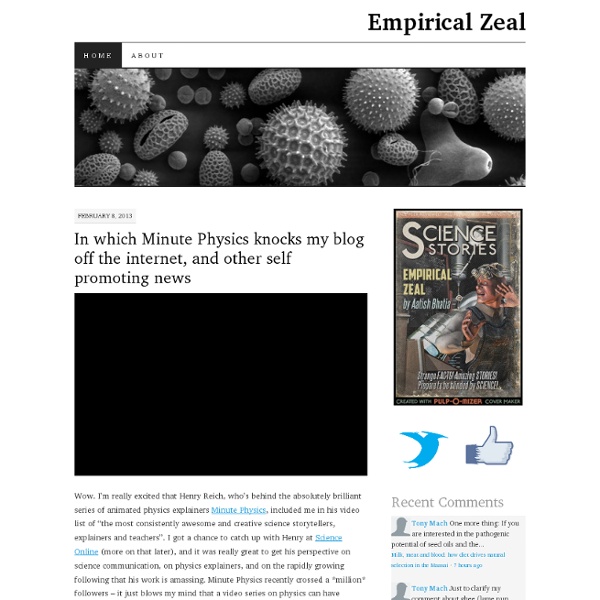 The Skeptic's Dictionary The World of Everyday Experience, In One Equation Longtime readers know I feel strongly that it should be more widely appreciated that the laws underlying the physics of everyday life are completely understood. (If you need more convincing: here, here, here.) For purposes of one of my talks next week in Oxford, I thought it would be useful to actually summarize those laws on a slide. This is the amplitude to undergo a transition from one configuration to another in the path-integral formalism of quantum mechanics, within the framework of quantum field theory, with field content and dynamics described by general relativity (for gravity) and the Standard Model of particle physics (for everything else). (Obviously, observations of the rest of the universe, in particular those that imply the existence of dark matter, can’t be accounted for in this model. As physics advances forward, we will add to our understanding. Let me know if I’ve made any typos here, or have gone too far in trying to make things compact.

A mathematical formalisation of dimensional analysis Mathematicians study a variety of different mathematical structures, but perhaps the structures that are most commonly associated with mathematics are the number systems, such as the integers or the real numbers . A similar situation exists in modern physics. (or related systems, such as if one wishes to measure a vector-valued physical quantity such as velocity). ) as algebraic (or differential) equations, which can then be solved and otherwise manipulated through the extensive mathematical toolbox that has been developed over the centuries to deal with such equations. However, as any student of physics is aware, most physical quantities are not represented purely by one or more numbers, but instead by a combination of a number and some sort of unit. ; instead, one has to say something like “the length of this object is yards”, combining both a number and a unit (in this case, the yard). feet; if one instead uses metres, the length is now metres; and so forth. metres in and is . where ) and or .

General Issues in Scaling « PreviousHomeNext » S.S. Stevens came up with what I think is the simplest and most straightforward definition of scaling. He said: Scaling is the assignment of objects to numbers according to a rule. But what does that mean? There are three statements describing attitudes towards immigration. But first, I have to clear up one of my pet peeves. Purposes of Scaling Why do we do scaling? Dimensionality A scale can have any number of dimensions in it. For instance, height is a concept that is unidimensional or one-dimensional. What would a two-dimensional concept be? Many models of intelligence or achievement postulate two major dimensions -- mathematical and verbal ability. OK, let's push this one step further: how about a three-dimensional concept? Their theory essentially states that you can rate any object along those three dimensions. Unidimensional or Multidimensional? What are the advantages of using a unidimensional model? The Major Unidimensional Scale Types

Astronomy Picture of the Day What number is halfway between 1 and 9? Is it 5 — or 3? Ask adults from the industrialized world what number is halfway between 1 and 9, and most will say 5. But pose the same question to small children, or people living in some traditional societies, and they're likely to answer 3. Cognitive scientists theorize that that's because it's actually more natural for humans to think logarithmically than linearly: 30 is 1, and 32 is 9, so logarithmically, the number halfway between them is 31, or 3. Neural circuits seem to bear out that theory. For instance, psychological experiments suggest that multiplying the intensity of some sensory stimuli causes a linear increase in perceived intensity. The new work was led by John Sun, a graduate student in Vivek Goyal's Signal Transformation and Information Representation (STIR) Group at RLE. Usually, STIR members research signal-processing problems in areas such as optical imaging or magnetic resonance imaging. Similarly, the model does a better job than its predecessors of describing brain plasticity.

HyperPhysics Concepts About HyperPhysics Rationale for Development HyperPhysics is an exploration environment for concepts in physics which employs concept maps and other linking strategies to facilitate smooth navigation. For the most part, it is laid out in small segments or "cards", true to its original development in HyperCard. Part of the intent for this exploration environment is to provide many opportunities for numerical exploration in the form of active formuli and standard problems implemented in Javascript. New content for HyperPhysics will be posted as it is developed. A resource that was initiated as a resource for local high school physics teachers whom I had taught has expanded into an intensively used website worldwide. CD or DVD versions have been sent to 86 countries to date, and translations into German, Italian, Chinese, and Español have been licensed and are underway. Please respect the Copyright HyperPhysics (©C.R. Availability on DVD or CD HyperPhysics

Scientific Method: Relationships Among Scientific Paradigms To see the full map of relationships among scientific paradigms, click here or on the image below. Note: The map is a large (8.7 MB) file and may take a while to download. Research & Node Layout: Kevin Boyack and Dick Klavans (mapofscience.com); Data: Thompson ISI; Graphics & Typography: W. Bradford Paley (didi.com/brad); Commissioned Katy Börner (scimaps.org) This map was constructed by sorting roughly 800,000 published papers into 776 different scientific paradigms (shown as pale circular nodes) based on how often the papers were cited together by authors of other papers. Information Esthetics, an organization founded by map co-creator W.