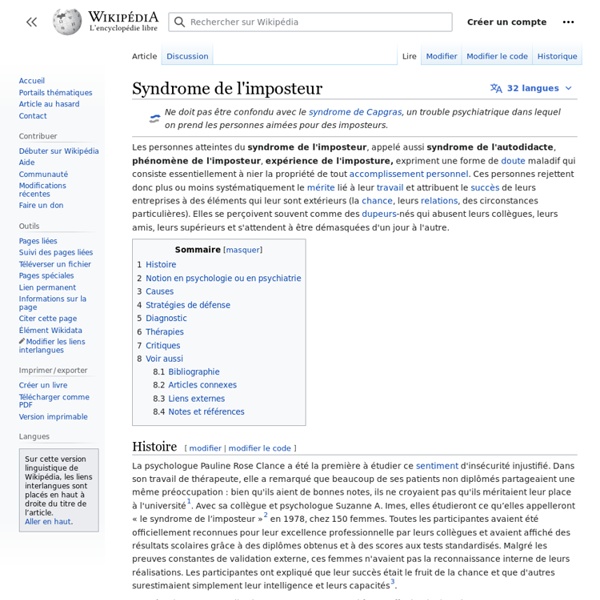 Seekers Of The Lost Pieces – The Lacanian Review When I first saw the Kennedy assassination filmed by Zapruder, I thought that Jacqueline was trying to jump out of the limousine after the fatal shot. An understandable reaction of panic in someone who sees bullets impact on the one next to them. Later, White’s interview made me see better what the images showed. She did not jump out of the vehicle, but instead tried to retrieve a piece of her husband’s brain mass. Google effect The Google effect is the tendency to forget information that can be found readily online by using Internet search engines such as Google. According to the first study about the Google effect people are less likely to remember certain details they believe will be accessible online. However, the study also claims that people's ability to learn information offline remains the same.[1][dead link] History[edit] The phenomenon was described and named by Betsy Sparrow (Columbia), Jenny Liu (Wisconsin) and Daniel M.

Character Strengths and Virtues: A Classification Character Strengths and Virtues is a groundbreaking handbook that was created built on reports from a prestigious group of researchers who have attempted to create a systematic classification and measurements of widely valued positive traits. The aim was to present a measure of humanist ideals of virtue in an empirical and scientific way. This handbook intends to provide a theoretical framework that will help assist positive psychology practitioners in developing practical applications for the field. There are six classes of virtues that are made up of 24 character strengths: Wisdom and KnowledgeCourageHumanityJusticeTemperanceTranscendence

'Race offenders register' would see racists banned from certain jobs A leader of a new political party has called for the creation of a ‘race offenders register’ which would see people accused of racism banned from having certain jobs and living in certain areas. Sasha Johnson, 26 – known as the ‘Black Panther of Oxford’ – is a representative of the Taking the Initiative Party (TTIP) which focuses on the benefits system, managed discrimination, education, housing and the spate of knife crime, among other issues. A ‘race offenders register’ would work in a similar way to the sex offenders register, meaning anyone who is racially abusive could be prohibited from doing specific things to stop their behaviour from harming others. Speaking to MailOnline, Ms Johnson said: ‘If you were to be racially abusive to someone, [the register] would question whether someone is fit enough to hold a particular job where their bias could influence another person’s life. ‘A lot of racism happens at work and places of education in a micro-aggressive way.

Generation effect In experiments[edit] The generation effect is typically achieved in cognitive psychology experiments by asking participants to generate words from word fragments.[2] This effect has also been demonstrated using a variety of other materials, such as when generating a word after being presented with its antonym[3] or synonym,[1] generating keywords in paragraphs,[4] pictures,[5] and arithmetic problems.[2][6] In addition, the generation effect has been found in studies using free recall, cued recall, and recognition tests.[3] In one study, the subject was provided with a stimulus word, the first letter of the response, and a word relating the two. For example, with the rule of opposite, the stimulus word "hot", and the letter "c", the word cold would be generated.

Secrets of the teenage brain Several years ago Frances E Jensen’s 16-year-old son wrote off a car. A few years earlier, her other son had returned from a friend’s house with his hair dyed jet black. The University of Pennsylvania neurologist was finding her teenagers’ erratic behaviour increasingly taxing, so she decided to study teenage thought processes and gathered her research in the book The Teenage Brain. Maslow Self Actualization - unlearn. "Self Actualization is the intrinsic growth of what is already in the organism, or more accurately, of what the organism is." Abraham Maslow Maslow studied healthy people, most psychologists study sick people. The characteristics listed here are the results of 20 years of study of people who had the "full use and exploitation of talents, capacities, potentialities, etc.." Self-actualization implies the attainment of the basic needs of physiological, safety/security, love/belongingness, and self-esteem. Maslow's Basic Principles:

Fading affect bias The fading affect bias, more commonly known as FAB, is a psychological phenomenon in which memories associated with negative emotions tend to be forgotten more quickly than those associated with positive emotions.[1] It is important to note that FAB only refers to the feelings one has associated with the memories and not the content of the memories themselves. [2]Early research studied FAB retrospectively, or through personal reflection, which brought about some criticism because retrospective analysis can be affected by subjective retrospective biases. However, new research using non-retrospective recall studies have found evidence for FAB.,[1] and the phenomenon has become largely accepted. Description and background[edit] Some of the earliest evidence for the Fading Affect Bias dates back to a study by Cason (1932). Landau and Gunter (2009) showed that the FAB occurs regardless of whether the experience is shared between one person or a group of people that share that memory. Anxiety

The Baader-Meinhof Phenomenon You may have heard about Baader-Meinhof Phenomenon before. In fact, you probably learned about it for the first time very recently. If not, then you just might hear about it again very soon. Baader-Meinhof is the phenomenon where one happens upon some obscure piece of information—often an unfamiliar word or name—and soon afterwards encounters the same subject again, often repeatedly. Context effect "THE CAT" is a classic example of context effect. We have little trouble reading "H" and "A" in their appropriate contexts, even though they take on the same form in each word. A context effect is an aspect of cognitive psychology that describes the influence of environmental factors on one's perception of a stimulus. The impact of context effects is considered to be part of top-down design. The concept is supported by the theoretical approach to perception known as constructive perception.

When Complex Trauma Is Misdiagnosed as Anxiety 3K+Save I’ve been living with the effects of complex trauma for a long time, but for many years, I didn’t know what it was. Off and on throughout my life, I’ve struggled with what I thought was anxiety and depression. Or rather, In addition to being traumatized, I was anxious and depressed.