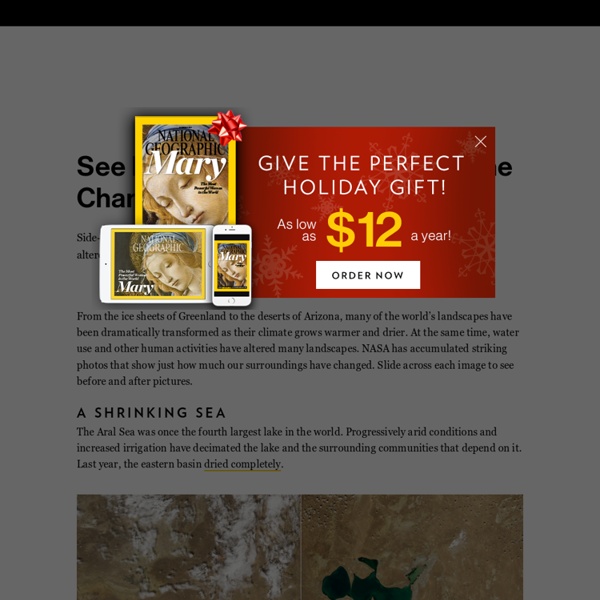 Side-by-side comparisons reveal just how much glaciers, lakes, and snowpacks have been altered by nature and humans. From the ice sheets of Greenland to the deserts of Arizona, many of the world’s landscapes have been dramatically transformed as their climate grows warmer and drier. At the same time, water use and other human activities have altered many landscapes. NASA has accumulated striking photos that show just how much our surroundings have changed. Slide across each image to see before and after pictures. A Shrinking Sea The Aral Sea was once the fourth largest lake in the world. Diminished Snowfall Snowpack in California’s Sierra Nevada reached the lowest level in recorded history. Reservoir at Risk Lake Mead, which depends on snowmelt from the Rockies, has seen its water levels plummet due to drought and increased demand. Glacier’s Retreat Yosemite National Park’s Lyell Glacier has receded tremendously over the last century, exposing swaths of bedrock underneath. Choked by Drought

Alaskan village votes on whether to relocate because of climate change The residents of an Alaskan coastal village have begun voting on whether to relocate because of rising sea levels. If they vote to move, the village of Shishmaref, just north of the Bering Strait, and its population of 650 people, could be the first in the US to do so because of climate change. The village would be relocated at an estimated cost of $180m to a new location less threatened by rising waters and melting sea ice. Where it would move would be decided later in a town meeting, according to the city clerk’s office. The world passes 400ppm carbon dioxide threshold. Permanently In the centuries to come, history books will likely look back on September 2016 as a major milestone for the world’s climate. At a time when atmospheric carbon dioxide is usually at its minimum, the monthly value failed to drop below 400 parts per million (ppm). That all but ensures that 2016 will be the year that carbon dioxide officially passed the symbolic 400 ppm mark, never to return below it in our lifetimes, according to scientists.

Putting Time In Perspective - UPDATED Humans are good at a lot of things, but putting time in perspective is not one of them. It’s not our fault—the spans of time in human history, and even more so in natural history, are so vast compared to the span of our life and recent history that it’s almost impossible to get a handle on it. If the Earth formed at midnight and the present moment is the next midnight, 24 hours later, modern humans have been around since 11:59:59pm—1 second. And if human history itself spans 24 hours from one midnight to the next, 14 minutes represents the time since Christ. To try to grasp some perspective, I mapped out the history of time as a series of growing timelines—each timeline contains all the previous timelines (colors will help you see which timelines are which).

Nasa: Earth is warming at a pace 'unprecedented in 1,000 years' The planet is warming at a pace not experienced within the past 1,000 years, at least, making it “very unlikely” that the world will stay within a crucial temperature limit agreed by nations just last year, according to Nasa’s top climate scientist. This year has already seen scorching heat around the world, with the average global temperature peaking at 1.38C above levels experienced in the 19th century, perilously close to the 1.5C limit agreed in the landmark Paris climate accord. July was the warmest month since modern record keeping began in 1880, with each month since October 2015 setting a new high mark for heat.

Aquatic Plants May Accelerate Arctic Methane Emissions Climate change has caused a boom in aquatic plant biomass on the Arctic tundra in recent decades. Those plants, in turn, are releasing increasing amounts of methane into the atmosphere, according to a paper published last week in the journal Global Change Biology. Christian Andresen of Los Alamos National Laboratory in Los Alamos, N.M. and his colleagues suspected that longer growing seasons and increasing permafrost thaw were altering the ecology of small freshwater ponds that pepper the tundra landscape—and perhaps the amount of methane they give off. Without a time machine, however, it’s hard to go back and see just how ecosystems and their greenhouse gas dynamics have been affected on a local scale. Andresen and his colleagues didn’t have a time machine, but they had the next best thing. Then and Now

Australia’s censorship of Unesco climate report is like a Shakespearean tragedy That quote from Shakespeare’s Hamlet comes to mind: “The lady doth protest too much, methinks.” The lady in question is the Australian government, which some time in early January saw a draft of a report from a United Nations organisation. The report, provisionally titled “Destinations at Risk: World Heritage and Tourism in a Changing Climate”, outlined how many world heritage sites around the world were being compromised by the impacts of climate change. One of the sites highlighted in the draft report was the Great Barrier Reef. Unnatural Climates Whether anthropogenic climate change began over 8,000 years ago or within the last few centuries, our inadvertent experiment in climate geoengineering is now not only discernible in its effects, but is also providing major challenges for ourselves and future generations Whatever action we take, from managing greenhouse gas emissions to active solar radiation management, it will have climate consequences. It’s therefore appropriate to ask two fundamental questions related to climate as a context for current and future actions: 1. What is or would be ‘natural’ climate, without human interference? 2.

Inside A Body Farm When police come across the grisly remains of a human body, they need to identify details like time of death from biological clues. For instance, the amount of bloating and skin yellowing indicates how long a body has been decaying. What happens biologically after someone dies is studied in the field of forensic anthropology. The Forensic Anthropology Center at Texas State University is one of only five body farms in the world. Global sea levels are rising fast, so where does that leave the cities most at risk? Current projections of global average sea level rise are now expected to double by 2100, which would be severely damaging – if not disastrous – for many of the world’s coastal cities, from Ho Chi Minh City and Mumbai to New Orleans and Miami. Yet the upcoming United Nations conference on sustainable urban development, Habitat III, is unlikely to create the international platform needed to tackle such a global threat, according to Dan Lewis, head of UN Habitat’s urban risk reduction unit. “The communication of risk is something that most UN member states are not prepared to openly discuss, unless they happen to be Tuvalu or the Maldives or other South Pacific or Caribbean islands,” Lewis told the Guardian. “Massive [climate-induced] displacement is a big problem that a lot of member states have dressed up as other kinds of issues. But when it comes to the real nuts and bolts of ‘how do you accommodate 100,000 people from Kiribati in the next decade or so?’

2016 locked into being hottest year on record, Nasa says Nasa has all but declared this year to be the hottest yet recorded, after September narrowly turned out the warmest in modern temperature monitoring. Last month was 0.91C above the average temperature for that time of year from 1951 to 1980, the benchmark used for measuring rises. The new findings follow record-breaking monthly anomalies throughout this year, leading the agency to believe that because of the highs reported so far, 2016 will take the crown as warmest in the 136 years of modern data-keeping.

Wildlife is absolutely thriving at Chernobyl disaster site It's hard to find a bright side to the world's worst-ever nuclear disaster, but wildlife may beg to differ. After the 1986 fire and explosion at the Chernobyl Nuclear Power Plant released radioactive particles into the atmosphere, everyone left, never to return. But now researchers studying animal populations have made a seriously counterintuitive discovery: The Chernobyl site looks less like a disaster zone and "more like a nature preserve," rife with elk, roe deer, red deer, wild boar, foxes, wolves, and others. "It's very likely that wildlife numbers at Chernobyl are much higher than they were before the accident," says Jim Smith of the University of Portsmouth in the UK. "This doesn't mean radiation is good for wildlife, just that the effects of human habitation, including hunting, farming, and forestry, are a lot worse."

Climate change: global deal reached to limit use of hydrofluorocarbons A worldwide deal has been reached to limit the use of greenhouse gases far more powerful than carbon dioxide in a major effort to fight climate change. The talks on hydrofluorocarbons, or HFCs, have been called the first test of global will since the historic Paris Agreement to cut carbon emissions was reached last year. HFCs are described as the world’s fastest-growing climate pollutant and are used in air conditioners and refrigerators. The agreement announced Saturday morning, after all-night negotiations, caps and reduces the use of HFCs in a gradual process beginning in 2019 with action by developed countries including the US, the world’s second worst polluter. More than 100 developing countries, including China, the world’s top carbon emitter, will start taking action in 2024.

Hurricane Matthew was a 1-in-1000-year disaster for North Carolina. In a report out Thursday, the United Nations Environment Programme says pedestrians, motorcyclists, and cyclists make up nearly half of the 1.3 million people killed worldwide in traffic accidents each year. Even more alarming, it says that about “140 people will die in road accidents while you read this report.” The fix?