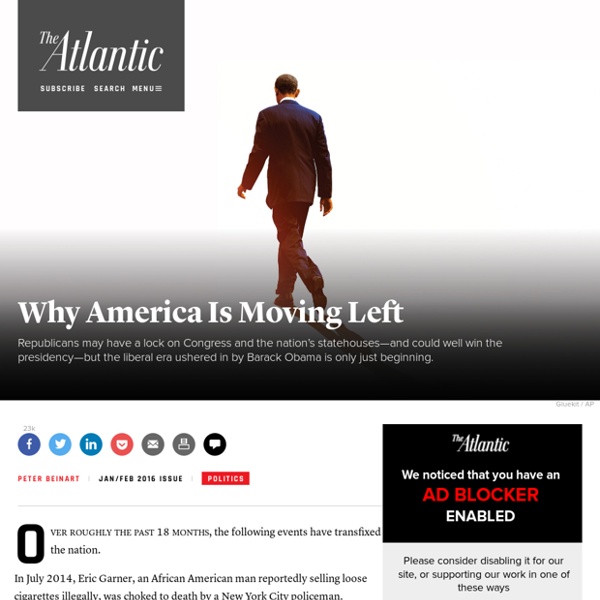 Over roughly the past 18 months, the following events have transfixed the nation. In July 2014, Eric Garner, an African American man reportedly selling loose cigarettes illegally, was choked to death by a New York City policeman. That August, a white police officer, Darren Wilson, shot and killed an African American teenager, Michael Brown, in Ferguson, Missouri. For close to two weeks, protesters battled police clad in military gear. Missouri’s governor said the city looked like a war zone. In December, an African American man with a criminal record avenged Garner’s and Brown’s deaths by murdering two New York City police officers. In April 2015 another young African American man, Freddie Gray, died in police custody, in Baltimore. Then, in July, activists with Black Lives Matter, a movement that had gained national attention after Brown’s death, disrupted speeches by two Democratic presidential candidates in Phoenix, Arizona. Anyone familiar with American history can hear the echoes.

New Research Confirms Consciousness Survives the Death of the Body The greatest question of all time may very well be, ‘what happens to us when we die?’ While many, individuals, religions and spiritual traditions have come to their own conclusions about the ever-lasting nature of the soul, it takes a great deal of faith to be certain about the after life. To the scientific mind, this won’t do, and the question looks a little more like, ‘what happens to human consciousness after clinical death?’

Howard Dean: How to Move Beyond the Two-Party System Photo I stand with Hillary Clinton in the presidential race. Others will back Donald J. Trump. But polls suggest that almost one in 10 voters are making a different choice by supporting the Libertarian candidate, Gary Johnson, the Green Party candidate, Jill Stein, or another candidate. And so once again major party backers warn against wasting votes on “spoilers” and criticize minor party candidates for even running. How Marianne Williamson advocates for mindful activism In this election season, a yoga studio is encouraging patrons to get off the mat and into citizen activism. On Saturday, Wanderlust Hollywood is hosting "Mindful America: Creating a Mindful Policy For a Healthy, Prosperous America." The six experts on the panel will pose answers to a provocative question: How can the personal practices of mindful living — living sustainably, buying organically and cultivating personal spirituality — be applied to public issues such as healthcare, energy and incarceration? Spiritual teacher and author Marianne Williamson will join the panel, which also includes Los Angeles yoga teacher and activist Seane Corn, Make Smart Cool founder Prince Ea, CTZNWELL founder Kerri Kelly, Revolve Impact founder Mike de la Rocha and Rep. Tim Ryan (D-Ohio), a meditation advocate and author of "A Mindful Nation: How a Simple Practice Can Help Us Reduce Stress, Improve Performance, and Recapture the American Spirit." There is a difference between transcendence and denial.

The Future of Liberalism and the Politicization of Everything - Niskanen Center January 25, 2017 by Samuel Hammond The ideals of liberalism seem increasingly under threat these days, so it’s worth reviewing what they are, where they come from, and why it’s essential that they make a comeback (a PDF version of this essay is available here). The first step is to recognize that they were not invented by some obsolete English philosopher. Rather, in their most general form, liberal principles have been rediscovered repeatedly and throughout history as practical tools for reconciling two basic social facts: Many of our deepest moral and metaphysical beliefs, like how to live a good life or which God to worship, are inherently contestable — reasonable people can and will disagree;We nonetheless all stand to benefit (on our own terms) from a social structure that enables peaceful cooperation.

Buddha, Confucius, Lao Tzu: Animated Introductions Thank you for your interest in Patheos newsletters! Please enter your email address below and click the "Subscribe" button. Thank you for your subscription. The woman who can smell Parkinson's disease Meet the woman from Perth whose super sense of smell could change the way Parkinson's disease is diagnosed. Joy Milne's husband, Les, died in June, aged 65. He worked as a consultant anaesthetist before being diagnosed with Parkinson's at the age of 45. One in 500 people in the UK has Parkinson's - that is 127,000 across Britain. If Democrats Want to Challenge Trump, They Need a New Strategy The moment that Donald Trump was inaugurated as president of the United States, the Democratic Party became the weakest, in terms of elected offices held, it has been in the entire history of the United States. While Republicans in Congress have begun to show some interest in investigating the Trump campaign’s pre-election ties to Russia, it remains the case that party competition, not the checks and balances among branches of the government, is the most important restraint on the power of the president. That means that Democrats in Congress, weak as they might be, are the only major obstacle between Trump and total control of the United States government. I’m a political scientist and business school professor who has written a book on American presidents and “unfiltered” leaders exactly like Trump, so this situation presents an irresistible challenge.

Disbelieve it or Not, Ancient History Suggests That Atheism is as Natural to Humans as Religion People in the ancient world did not always believe in the gods, a new study suggests – casting doubt on the idea that religious belief is a “default setting” for humans. “Early societies were far more capable than many since of containing atheism within the spectrum of what they considered normal – Tim Whitmarsh” Despite being written out of large parts of history, atheists thrived in the polytheistic societies of the ancient world – raising considerable doubts about whether humans really are “wired” for religion – a new study suggests. Why Airlines Want to Make You Suffer This fall, JetBlue airline finally threw in the towel. For years, the company was among the last holdouts in the face of an industry trend toward smaller seats, higher fees, and other forms of unpleasantness. JetBlue distinguished itself by providing decent, fee-free service for everyone, an approach that seemed to be working: passengers liked the airline, and it made a consistent profit.

Is the Democratic Party Relevant Anymore? (Image: Troy Page / t r u t h o u t; Adapted: samdupont / Flickr)Many Democrats examining what happened in the 2014 midterms are asking “what did the voters want?” But the right question is why did only 36.4 percent of potential voters bother to register and vote? Obviously Democrats did not give those voters a good enough reason to take the trouble. Is the Democratic Party relevant anymore?