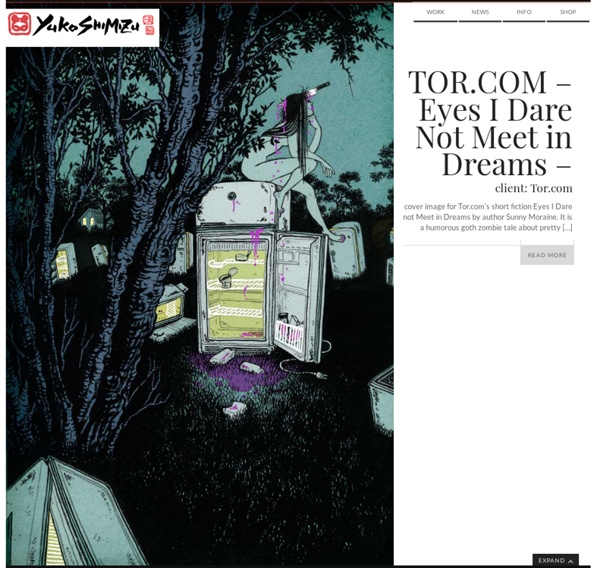 Artists - Adam Simpson - Galleries - Adam Simpson 1 London Heart Top Floor 100 De Beauvoir Road London N1 4EN T Tel 020 7254 5558 F Fax 020 7923 4791 info@heartagency.com Google map New York Heart USA Inc. 611 Broadway Suite 734 New York NY 10012 Star Wars Steampunk Steampunk is one of those things that you actually need to SEE to appreciate. Me, I never really understood the concept of re-tooling something to what it could have looked like in the 19th century when steam was used,but that is what steampunk is, along with a bit of science fiction thrown in for good measure. Then I played the game Bioshock, and since then I appreciate it. But this, these designs of Star Wars characters re-imagined into steampunk characters by Bjorn Hurri located below the jump are simply amazing. Even when his art is still a work in progress, as some are below, they still leap off the page.

VICTOR CASTILLO 50 más impresionantes en 3D Street Art (pinturas) 3d Street Art paintings have been around since the sixteenth century when Italian Renaissance Madonnari and French trompe l’oeil (French for ‘deceive the eye’) painters created stunning murals to decorate the interior walls of luxurious villas. 3d art can also trace it’s routes further back to ancient Greek days when painter Zeuxius (born around 464BC) painted a still life painting so convincing that birds flew down from the sky to peck at the painted grapes. The magic of 3d is created by painting a 2d picture and viewing it from a specific angle to capture the right perspective. More: 3D Street Art Paintings, Part I Edgar Mueller Third cave project. Ptuj, Slovenia.

Realistas Retratos de mujeres famosas dibujado con lápiz Obras vida 09 Aug 2010 August 9, 2010 Some artist are crazy about drawing with the pencils and when we say crazy we mean about those who are drawing super-realistic paintings.It is pretty hard to make realistic paintings with the use of pencil without but some artists are managing to create pretty realistic images which does look almost exactly like monochrome photographs. Here you can see a collection of portraits of famous women which were painted with pencils.

“Duality” by Edgar Müller Only few days ago, we have featured some of the most interesting chalk drawings by Edgar Müller. But this hasn’t stopped Edgar from doing some more excellent work, more precisely in Moscow, Russia. Pictured below, you may find a colossal 3D Chalk Drawing, just like Edgar usually does ‘em. If you continue scrolling inside this article, there are few more shot of how the picture came to be. Check out the concrete plaza in Moscow, before work on “Duality” has even started, as well as the finished product.

acera tipo tiza sidewalk chalk guy «« back to gprime.net all material copyrighted by its original creator | Argentine Realistic Figurative painter Recognizing the influences implicit in his training, but striving to build upon the discipline it gave him, he has created a world of pictorial imagery entirely his own. The unusual intensity of his art takes him far beyond the borders of South America and places him in a broader international artistic community. In 1988, he graduated from La Escuela de artes de la Universidad Nacional de Cordoba. He has had many successful individual exhibitions since 1988 and has obtained distinctions too numerous to list. His elegant and thought provoking studies are instantly recognizable with collectors.

Sacramento, California Hidden in his paintings are messages that speak to Thom's inspiration for each image. Whether including the initials of family members, hiding Disney characters, or imbedding hearts for special occasions and loved ones, each image contain treasures that add to their mystique. Thom is also a prolific author and speaker. He has authored or has been the subject of over 140 books. He is a New York Times and USA Today best-selling author.